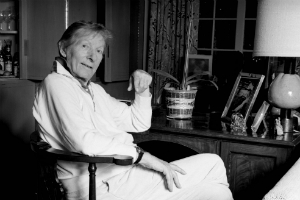 American comic actor. A redhead, he dropped out of school at 13 to become a clowning busboy in a New York Catskill Mountains resort. He had a variety of jobs, slowly moving into vaudeville and night clubs as a singer, dancer and entertainer.

His Broadway debut was in 1939, and in '41, he did the show-stopping song, "Tshaikovsky," reeling off the names of 54 Russian composers in 38 seconds in what was to become his trademark hilarious staccato delivery. From there, he went on to become a great favorite of stage and screen.

Goldwyn's 1944 film, "Up In Arms" was the first of a series of lavish string of hits. Easy and personable, he found enormous popularity in the U.S. and Britain in such films as "The Secret Life of Walter Mitty," 1947.

In the '50s, he began to devote more of his time to UNICEF, working for children's benefits. He was also a chef, a talented musician and co-owner of a baseball club.

He married Sylvia Fine, 1940, who wrote much of the music for his films.