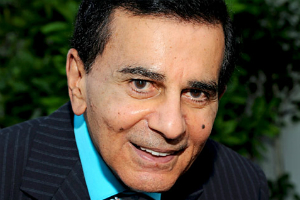 Kemal Amin "Casey" Kasem (born April 27, 1932) is an American radio personality and voice actor, known for being the host of the nationally syndicated Top 40 countdown show American Top 40 and for voicing the character Shaggy in the popular Saturday morning cartoon franchise Scooby-Doo.

In addition to his radio shows, Kasem has provided the voice of many commercials; has done many voices for Sesame Street; was the voice of NBC; helps out with the annual Jerry Lewis telethon; and provided the cartoon voices of Robin in Super Friends, Mark on Battle of the Planets, and a number of characters for the Transformers cartoon series of the 1980s. In 2008, he was the voice of "Out of Sight Retro Night" which airs on WGN America, but recently was replaced by rival Rick Dees. After 40 years, Casey retired from his role of voicing Shaggy in 2009, instead voicing Shaggy's father in the 2010 TV series, Scooby-Doo! Mystery Incorporated. Kasem's daughter Kerri Kasem has followed in her father's footsteps by hosting the nationally syndicated "Sixx Sense" and "The Sideshow Countdown" for Clear Channel among other shows. Since early 2012, Casey has been broadcasting American Top 40 shows from the 1970s on Smooth Radio in the UK.

Kasem's signature sign-off is: "Keep your feet on the ground and keep reaching for the stars."

Kasem was born in Detroit, Michigan, to Lebanese Druze parents who emigrated from the British Mandate of Palestine to Lebanon. After arriving in the United States, they settled in Michigan, where they worked as grocers. Kasem is a graduate of Northwestern High School in Detroit and Wayne State University.

Kasem, whose professional radio career started in the mid-1950s in Flint, MI at WJBK, was drafted into the U.S. Army in 1952 and sent to Korea, where he was a DJ/announcer on the Armed Forces Radio Korea Network. He developed his rock-trivia persona from his work as a disc jockey in the early 1960s at KYA in San Francisco and KEWB in Oakland, California. He also worked for several other stations across the country, including WJW (now WKNR) in Cleveland, Ohio; WBNY (now WWWS) in Buffalo, New York; and KRLA 1110 in Los Angeles (1963–69), before launching the national show American Top 40 on July 4, 1970.

Kasem is best known as a music historian and disc jockey, most notably as host of the weekly American Top 40 radio program from July 4, 1970, through 1988, and again from March 1998 until January 10, 2004, when Ryan Seacrest succeeded him. During Kasem's original run (1970–88), his show featured certain songs in addition to the countdown, such as a "long distance dedication" from one listener to another; or, the song of a "spotlight artist." On the July 4th weekend of each year, the show's anniversary, Kasem often featured a special countdown of particular songs from a certain era, genre or artist. The Moody Blues were the only artist to appear in both Kasem's first countdown on July 4, 1970, and his last on August 6, 1988. Kasem hosted a spin-off television show called America's Top 10 for most of the 1980s. For a period in the late 1970s and early 1980s, Kasem was the staff announcer for the NBC television network. More recently, he has appeared in infomercials, marketing CD music compilations. Kasem received a star on the Hollywood Walk of Fame on April 27, 1981, his 49th birthday, and was inducted into the National Radio Hall of Fame in 1992. When he was hosting American Top 40, Kasem would often include trivia facts about songs he played and artists whose work he showcased. Frequently, he would mention a trivia fact about an unnamed singer before a commercial break, then provide the name of the singer after returning from the break. This technique, called a tease, later also made its way into America's Top 10, where viewers would submit trivia questions for him to answer. In 1971, he provided the character voice of Peter Cottontail in the Rankin/Bass production of Here Comes Peter Cottontail, versus Vincent Price providing the voice of the villainous Iron Tail.

In 1972, Kasem appeared in the low-budget film The Incredible 2-Headed Transplant, which also starred Bruce Dern. In 1984 Kasem made a cameo in Ghostbusters, reprising his role as the host of American Top 40.

From January 1989 to March 1998, when Kasem was not at the helm of AT40, he was host of Casey's Top 40, Casey's Hot 20, and Casey's Countdown, syndicated by the Westwood One Radio Networks. He was also the host of the short-lived American version of 100% during the 1998–9 season, and would close each episode by inviting viewers to join him that weekend on AT40, which Kasem had just returned to.

At the end of 2004, Casey recorded several holiday themed programs to air on stations that flip to "all-Christmas" for the holidays. These shows are still heard each holiday season.

In April 2005, the only American Top 40 Live television special aired on FOX. Hosted by Ryan Seacrest, Kasem did appear with him on the show.

In 2007, Casey celebrated 30 years of his signature Long Distance Dedication segment. In February, a special "LDD" themed American Top 10 show aired. In August, both AT20 and AT10 featured special LDD segments including a homemade song from a listener and a 3 way phone call between Casey and the writer and recipient of the first LDD.

In November 2007, Casey's son Mike became his regular (and final) substitute host for AT20 and AT10. Towards the end of 2008 and 2009, Mike was a frequent host as Casey began taking several weeks off. Mike's hosting style differed from Casey's as the shows adapted a more youthful sound during the weeks he would host. Many speculated Mike was being groomed to take over for his father. Instead, however, in June 2009 it was announced that Premiere Radio Networks would cease production of AT20 and AT10 after the Fourth of July holiday.

On the week of July 4, 2009, after 39 years on air, Casey Kasem ended his run on the radio. American Top 20 and American Top 10 aired their final shows, with Casey giving a brief retrospective of his 39 years of counting down the hits. Casey also read one final Long Distance Dedication, from a listener thanking Casey for 39 years of music. Replays of Casey's shows from the 1970s and 1980s continue to air on 200+ stations around the country, but Casey is no longer producing any new material in the studio.

Since ending his run on radio, Casey has given no interviews. He briefly appeared on his daughter Kerri Kasem's podcast in late 2009.

Kasem began his television career hosting Shebang, a dance show aired weekday afternoons on Los Angeles television station KTLA in the mid to late 1960s. He is a prominent voiceover actor, and is most connected to Hanna-Barbera. His most famous role was the voice of Shaggy in the Scooby-Doo franchise, beginning with the first series, Scooby-Doo, Where Are You! in 1969-1978. He has done work for many other animated series, such as the voice of Robin, The Boy Wonder in the 1968 Batman cartoons, three 1970 episodes of Sesame Street, and various versions of SuperFriends; the drummer Groove from The Cattanooga Cats (1969); Alexander Cabot III from Josie and the Pussycats (1970) and Josie and the Pussycats in Outer Space (1972); Merry from The Return of the King (1980); and television specials such as Rankin-Bass' Here Comes Peter Cottontail.

Kasem has also done many TV commercial voiceovers for companies and products like A&P, Chevron, Ford, Red Lobster, Raid, Oscar Mayer, Hoover vacuum cleaners, Velveeta, Joy dishwashing liquid, Heinz ketchup, Sears, Prestone, Dairy Queen, Continental Airlines, the California Raisin Advisory Board, the National Cancer Institute, and promos for the NBC television network[citation needed]. He also played the voice of Mark, the American name of Ken Washio in Battle of the Planets, the first American version of Gatchaman, as well as Bluestreak, Cliffjumper, Teletraan I and Dr. Arkeville in the original Transformers animated series, but left during the third season due to what he perceived as offensive caricatures of Arabs and Arab countries in the episode "Thief in the Night."

He initially was hired as the narrator for the TV show Soap, but quit the series after the pilot due to the controversial adult themes the show promoted. Rod Roddy replaced him as narrator; it was Roddy's first national television announcing job.

In addition to voice acting, Kasem has appeared on camera on at least two episodes of Hawaii Five-0 and Nick at Nite on New Year's Eve from 1989 to 1998, counting down the top reruns of the year.

He was once also seen on Late Show with David Letterman performing a Top Ten list: "the Top Ten Favorite Numbers from 1 to 10." The countdown of numbers was paused at number 2 for Kasem to spoof one of his long distance dedications.

Additionally, he appeared on camera as a co-host of Jerry Lewis' annual Labor Day Telethon for The Muscular Dystrophy Association from 1983–2005.

Kasem also made two cameo appearances on the TV show Saved by the Bell in the early 1990s and one cameo appearance on the 1970s show Quincy, M.E. in the episode "An Unfriendly Radiance." Kasem also appeared in an episode of ALF during that show's 4th season.

In the late 1970s, Kasem portrayed an actor who imitated Columbo and had a key role in the Hardy Boys/Nancy Drew Mysteries two-part episodes "The Mystery of the Hollywood Phantom." He also portrayed a golf commentator in an episode of Charlie's Angels titled "Winning is for Losers," with then unknown actress Jamie Lee Curtis playing one of the golfers.

In 2008, Casey was the voiceover talent for cable channel WGN America's "Out of Sight Retro Night."

In 2009, Casey retired from voice acting, with his final performance being the voice of Shaggy in the direct-to-DVD movie Scooby-Doo and the Samurai Sword. He did voice Shaggy again for The Official BBC Children in Need Medley, but went uncredited by his request.

In March 2010, Kasem appeared in a commercial for Sprint 4G, reprising his role as AT40 host.

Kasem was married to Linda Myers from 1971 to 1973, and they have three children together: Mike, Kerri Kasem and Julie. Kasem is of Lebanese Druze heritage, and he is a vegan. He has also been active in politics for years, supporting Lebanese-American and Arab-American causes and politicians. Kasem wrote a brochure published by the Arab-American Institute entitled "Arab-Americans: Making a Difference."

In 1985, he was inducted into the National Association of Broadcasters Hall of Fame radio division.