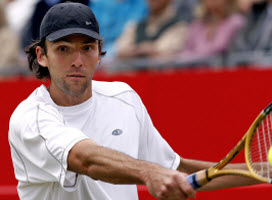 Ivo Karlovic (born 28 February 1979 in Zagreb) is a Croatian tennis player. At 208 cm (6 ft 10 in) tall, Karlovic is the tallest player ever to play in an ATP event and is considered the best server on the tour. His best ATP singles ranking to date is world #18, which he attained in April 2008.

Taking advantage of his height, Karlovic is heavily reliant on his serve. With a more acute angle from his racquet to the service line, his first serves have a higher chance of coming in, thereby rendering many of them unhittable, let alone returnable. With bad returns from his opponents, he normally just has to put the ball away for a winner without the need of a proper volley. Some critics say he will not make his mark being a serve-only player, but he proved them wrong by beating top players like Lleyton Hewitt, Andy Roddick, Fernando González and James Blake, among others. He also nearly defeated #1 Roger Federer in a match that ended in a tiebreak in the final set.

Gaël Monfils beat Karlovic in the first match that the Croat has been unable to hit a single ace.

Nicknamed Dr. Ivo, Karlovic has now won three singles titles, all in 2007, and one doubles title in 2006.

Playing career
He debuted for the Croatian Davis Cup team in 2000 against Ireland, when he won the dead rubber. Karlovic appeared in a starting line-up for first time in 2002 against Argentina in Buenos Aires, but he lost to Juan Ignacio Chela in the second rubber and to Gastón Gaudio in fifth and decisive rubber. He has posted a 4–2 career record (2–2 in singles) in three ties since 2000.

Karlovic caused a stunning upset at 2003 Wimbledon Championships when he beat defending champion Lleyton Hewitt in his first-ever match in a Grand Slam tournament. He finished the 2003 year in the Top 100 and as the No. 3 Croatian, behind Ivan Ljubi?i? and Mario An?i?. He also averaged an ATP-best of 17.6 aces per match.

Ivo continued to be a surprising force on the circuit during the 2004 season in which he won at Calabasas, California, and has made it to the round of sixteen in many tournaments, including Wimbledon, where he lost in straight sets to the eventual champion Roger Federer.

In 2005, Karlovic reached his first ATP final at the Queen's Club Championships, defeating Lleyton Hewitt and Thomas Johansson along the way. In the final he lost to Andy Roddick in a match with no breaks of serve (7–6, 7–6). After the final, Roddick said of Karlovi?'s serve, "It's probably the biggest weapon in tennis... you don't really get a feel for it unless you are on the other side. It was not fun at times."

In November 2005, he was a member of the Croatian team that won the Davis Cup. He did not play in the finals but played in a few dead rubbers in previous rounds.

On 26 February 2006, he won his first ATP Doubles Tournament with South African Chris Haggard, beating the America duo of James Blake and Mardy Fish in the Regions Morgan Keegan Championships and the Cellular South Cup, Memphis, USA. On 10 April, he reached a career high of #46 in doubles.

At age of 28 Ivo finally won his first ATP Singles Title at the 2007 U.S. Men's Clay Court Championships in Houston, Texas, after beating Argentinian Mariano Zabaleta in the final 6–4, 6–1.

On 23 June 2007, he won his second title of the year and his career at Nottingham, the last grass tune-up before Wimbledon, defeating #7 seed Stanislas Wawrinka, Gilles Simon, Juan Martín del Potro, #2 seed Dmitry Tursunov (a match played on indoor hard courts due to torrential rain), and Arnaud Clément. As a result, he surpassed his career high from May of last year and broke into the top 45 for the first time. Despite a first round loss at Wimbledon, he rose to #40, making his top 40 debut.

On 14 October 2007 he won his third title of the year by taking the Stockholm Open, defeating former Australian Open Champion Thomas Johansson in three sets, 6–3, 3–6, 6–1 in the final. Earlier Karlovic had yet again met Frenchman Arnaud Clément in his quarter final, the pair having met 5 times this year alone including in the final of Nottingham earlier in the year where Karlovic secured his second career title. Karlovic edged past his rival after saving match point in the final set tiebreak and then went on to defeat German number 1 Tommy Haas in the semi-final.

Karlovic is only the second player to have won titles on three different surfaces this season; the other being Roger Federer.

Uninvolvement in Davis Cup
Karlovic has been absent from recent Croatian Davis Cup campaigns due an dispute between himself and Croatian tennis chiefs. The reason for the dispute is unequal distribution of the money won by the tennis players. Also, Karlovic had never received financial help as a young tennis player from the Croatian Tennis Federation, with all the money going to Ivan Ljubi?i?, because of the former president of the Croatian tennis federation, Suad Rizvanbegovi?.

It is worth noting that during Croatia's Davis Cup tie with Great Britain in September 2007, Goran Ivaniševi?, a formerly staunch supporter of the squad, was also absent, leading to rumours of a growth in the rift.


Karlovic has been involved in many records of the ATP tour, including most aces in a match, most tiebreaks in a year and came close to serving the most aces in a season, a record that fellow Croatian compatriot Goran Ivaniševi? holds, with 1477 aces served in 1996. On October 5, 2007, Karlovic became the fourth different player to hit more than 1000 aces in one season when he defeated Lleyton Hewitt in the quarterfinals of the ATP event in Tokyo, Japan. The only other players to also surpass hitting over 1000 aces in one season are Pete Sampras in 1993, Karlovic's fellow countryman Goran Ivaniševi? in 1994, 1996, 1997, and 1998, and Andy Roddick in 2004. Ivaniševi?'s 1996 tally remains the record, and Karlovic said in October 2007 that "I think it's almost unreachable ... he's too far ahead. I don't think about it." Karlovic finished the year with 1318 aces.

Karlovic is involved in a notably high number of tiebreaks. This is because his serve is so hard to break and because, like many players of his build and serve-dominated game, Karlovic isn't the strongest returner in the game (meaning he breaks his opponents' serve less than perhaps other players).

As a result this has led some top players on the tour to jokingly say they should just play 2 tiebreaks instead of 2 sets when playing Karlovic.

On 3 August 2007 in his match against Paul Capdeville, Ivo Karlovic hit a second serve of 144 mph, a new world record for fastest second serve.

On June 21, 2005, Karlovic tied the record for most aces hit in a match, having struck 51 past Daniele Bracciali in the first round of the Grand Slam Wimbledon tournament. Incidentally, he lost the match after five sets of play. He shares the record of 51 with Sweden's Joachim Johansson.

Fastest serve
Officially, Karlovi?'s fastest serve is 153mph, which he recorded en route to beating Frenchman Arnaud Clément in the final of Nottingham, 2007. However, commentator and tennis pundit Peter Fleming said at the time during his commentary for Sky Sports that, since this serve was out wide (as opposed to Andy Roddick's 155mph which was up the center of the court) this would translate as being 3 or 4 mph faster than recorded. Fleming remarked at the time: "153mph out wide - is that possible?"

Karlovic has said on a number of occasions that he wants and believes he can achieve the record for the world's fastest serve.

Trivia
During Karlovi?'s childhood, his mother Gordana worked in agriculture, while his father Vlado was a meteorologist.
He married his wife Alsi on March 29, 2005.
One of his favorite activities is playing basketball.
Karlovic wears size 16 shoes.
At the 2008 Australian Open, Karlovic entered the men's doubles tournament with 6ft 9in John Isner, making them the tallest doubles pair in history. They lost 7–6, 6–3 to Juan Pablo Brzezicki and Agustin Calleri in the first round, although Karlovic commented afterwards "It was a lot of fun. We will win together next time."