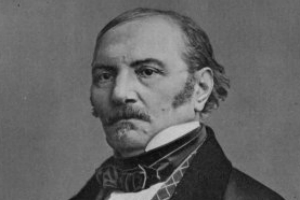 Allan Kardec is the pen name of the French teacher and educator Hippolyte Léon Denizard Rivail (Lyon, October 3, 1804 – Paris, March 31, 1869). He is known today as the systematizer of Spiritism for which he laid the foundation with the five books of the Spiritist Codification.

Rivail was born in Lyon in 1804. He was raised as a Catholic. He was a disciple and collaborator of Johann Heinrich Pestalozzi, and a teacher of mathematics, physics, chemistry, astronomy, physiology, comparative anatomy and French in Paris. For one of his research papers, he was inducted in 1831 into the Royal Academy of Arras. He organized and taught free courses for the underprivileged.

On February 1832, he married Amélie Gabrielle Boudet. Rivail became a convert to Spiritism in May, 1855 after attending a séance where he claimed to witness table-turning which he believed was caused by spirits.

He was already in his early 50s when he became interested in the wildly popular phenomenon of spirit-tapping. At the time, strange phenomena attributed to the action of spirits were reported in many different places, most notably in the U.S. and France, attracting the attention of high society. The first such phenomena were at best frivolous and entertaining, featuring objects that moved or "tapped" under what was said to be spirit control. In some cases, this was alleged to be a type of communication: the supposed spirits answered questions by controlling the movements of objects so as to pick out letters to form words, or simply indicate "yes" or "no".

At the time, Franz Mesmer's theory of animal magnetism was popular in the upper reaches of society. When confronted with the phenomena described, some researchers, including Rivail, pointed out that animal magnetism might explain them. Rivail, however, after personally seeing a demonstration, quickly dismissed the animal-magnetism hypothesis as being insufficient to completely explain all the facts observed and supported the spirit hypothesis (see Chapters VIII and XIV in The Book on Mediums).

As a teacher with little scientific background (he had never attended a university), Rivail decided to do his own research. Not being a medium himself, he compiled a list of questions and began working with mediums and channelers to put them to spirits. Soon the quality of the communications, allegedly with spirits, appeared to improve.

Rivail used the name "Allan Kardec" allegedly after a spirit identified as Zefiro, whom he had been communicating with, told him about a previous incarnation of his as a Druid by that name. Rivail liked the name and decided to use it to keep his Spiritist writings separate from his work, basically books for high school students. Rivail believed in reincarnation which was in opposition to American and British Spiritualism.

On April 18, 1857, Rivail (signing himself "Allan Kardec") published his first book on Spiritism, The Spirits' Book, comprising a series of answered questions exploring matters concerning the nature of spirits, the spirit world, and the relations between the spirit world and the material world. This was followed by a series of other books, like The Book on Mediums and The Gospel According to Spiritism, and by a periodical, the Revue Spirite, which Kardec published until his death. Kardec thus produced the books that form the Spiritist Codification.

After his death caused by aneurysm, Kardec was buried at the Cimetière du Père Lachaise.