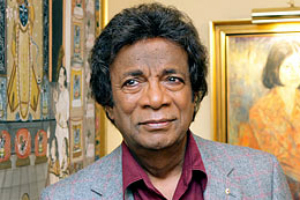 Kamahl is the stage name of Kandiah Kamalesvaran; born 13 November 1934), a Malaysian-born Australian singer and recording artist, perhaps best known for "The Elephant Song", and his repertoire of popular music.

Born in Malaysia to Tamil Hindu parents, Kamahl is of Sri Lankan Tamil heritage. He grew up in Brickfields, Kuala Lumpur, and studied at the Victoria Institution.

He arrived in Adelaide, South Australia in 1953 to receive a higher education at King's College (now Pembroke School)

At his first public performance in 1958 he shortened his name to Kamal, but the Master of Ceremonies announced him as "Camel". After that he changed the spelling to Kamahl.

As he made his way into the Australian music industry, Rupert Murdoch was an early important mentor. Murdoch tipped Kamahl £10 at a concert in December 1958 and encouraged him to move to Sydney. Without asking, Murdoch arranged for Kamahl to perform a six-week season at the Hotel Australia in Sydney. After that season, he boarded with the Murdochs for two years.

Kamahl has performed at the London Palladium and Carnegie Hall, as well as pubs and clubs throughout Australia. In 1982 Queen Elizabeth II asked him to give a Royal Command performance in Brisbane for the Commonwealth Games there. In 1984, he sang with Cathy Lee Johnson at the L.A. Variety Telethon.

His first album was A Voice to Remember, which was released in Australia in October 1967. He has released singles and albums in the United States, Canada, Britain, New Zealand, South America, India, Singapore, Malaysia and Germany (the last in German, as well as in the Netherlands, Belgium, and Scandinavia. From 1967 onwards in Australia his records, tapes and CDs were primarily on the Philips label, but he also recorded on EMI, Mercury, Festival, Dino and Reader's Digest.

In 1975, his single, "The Elephant Song" (composed and produced by Hans van Hemert) hit the number one spot on the Dutch Top 40, the Nationale Hitparade (currently Single Top 100)[3] and the Belgian BRT Top 30. This song was part of the soundtrack of a World Wildlife Fund TV documentary.

He has been in the Australian music industry for fifty years, and throughout that time has made some memorable TV and film appearances, as well as concerts. He was one of the first people to appear in concert at the Sydney Opera House. He was a particularly popular guest on the variety show Hey Hey It's Saturday. In 2004 he appeared at the Big Day Out rock festival, and the year before he had cameos in the Australian films Harvie Krumpet and Fat Pizza. He collaborated with the Wiggles for some of their performances, showing his inter-generational appeal.

His latest album is Imagine the World in Unison as of 2005. He is also making appearances as a judge on The X-Factor and has a sponsorship deal with Coca-Cola. On 19 September 2007 he featured on The Chaser's War on Everything on ABC TV where he sang for a 'newly-wed couple' who turned up uninvited on his door.

In early 2008, Kamahl reunited with his old school, Pembroke (then Kings College), and went on tour in the United States with the Pembroke Symphony Orchestra.

In 2009, he accused the Australian TV show Hey Hey It's Saturday of having treated him in a way that smacked of racism, during his past guest appearances. His feelings were revealed to the Australian public shortly after Harry Connick, Jr. complained of a "black faces" skit for the show's "Red Faces" segment.

In 2010, Kamahl made a cameo appearance on Yes We Canberra! as well had a small role in one sketch which was unused but later an extra on the DVD release.

Kamahl appeared an episode of Australian TV quiz show Spicks and Specks which first went to air on 8 September 2010.

He recently[when?] made commercials for Australian Cable Channel Fox8, advertising their WWE programming.

In 2012, Kamahl made appearances in Prime's show The Unbelievable Truth 2001, appear at Sydney Boys High School with the honourable Douglas Stewart.

In May 2013, an Australian drama, Offspring, aired an episode which featured Kamahl in a minor role as a medical specialist.

1998 - Australian Father Of The Year award

He received another Australian honour when he was included in 'Our Entertainers of the 20th Century' in May 2006. Organised by the Variety Club of Australia, the top entertainers of the century included Kylie Minogue, Dame Joan Sutherland, Rolf Harris, Jack Thompson and Graham Kennedy.