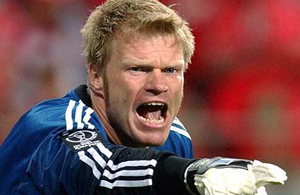 Karlsruher SC
Kahn signed his first professional contract at Karlsruher SC in the 1987-88 season, at first being the reserve goalkeeper behind Alexander Famulla. However, he had to wait until 1990 until KSC coach Winfried Schäfer decided to start Kahn over Famulla. In the following years, Kahn established himself as a quality goalkeeper, greatly contributing in establishing KSC as a force to reckon with in the Bundesliga. He was a key player in the fondly-remembered KSC team which reached the semi finals in the 1993-94 UEFA Cup, the most memorable moment being a historic 7-0 rout of Valencia CF after losing the first match 1-3.

Bayern München
Kahn was first signed by Bayern Munich at the beginning of the 1994/95 season, and has since gone on to win multiple honors, both at the domestic and international level. The Bavarian club paid him a then record fee for a goalkeeper of 2.5 million euros, and thus Kahn was firmly established as Bayern's first-choice. Although suffering a rupture of his cruciate ligament in the next season, he developed into a formidable player. In 1999, he captained Bayern to the Champions League final, although Manchester United scored two goals in injury time to win the title (called the "Tragedy of Camp Nou" by fans of Bayern München, and "Miracle of Camp Nou" by fans of Manchester United"). He was named Man of the Match when he supported his club to the 2001 Champions League title, making several crucial saves in the penalty shootout that commenced after the teams remained tied 1-1 after extra time.

Due to injuries and personal problems, his game went into a rapid decline after the 2002-2003 season. This culminated with Kahn allowing a seemingly soft shot into the net against Real Madrid in the 2004 Champions League season, contributing to the elimination of his team from the competition. However, since the 2003-2004 season and despite advancing in age, Kahn's performances have vastly improved and he has re-established himself as a reliable shot stopper.

Kahn has announced his intention to honor his contract and play through the 2007-2008 season. . As of 2007, he is the all time clean sheet leader in the history of the Bundesliga with 185. He made his 500th Bundesliga appearance on April 15, 2006. Milestones continue to fall for Kahn; he made his 400th Bundesliga appearance with Bayern Munich on August 11, 2006 against Bayer Leverkusen; and on September 2, 2007, he played in his 535th Bundesliga match, becoming the league's all time leader in matches played among goalkeepers.

International career
Kahn's international debut for Germany came in a match against Switzerland on June 23, 1995; however, it was some time before he became the team's primary goalkeeper. Initially Kahn was the reserve keeper as Germany were victorious in Euro 96 in England. He spent the 1998 FIFA World Cup in France on the bench, and it was not until Andreas Köpke announced his retirement at the end of the tournament that Kahn was finally given his chance in the No. 1 shirt. Euro 2000 was a difficult period for then-defending champions Germany, as they made an embarrassing exit in the group stage, having scored only one goal. The team drew with Romania and suffered losses to England and Portugal. Afterwards, Kahn became captain of the national team, succeeding Oliver Bierhoff.

Expectations for Germany were comparatively low entering the 2002 FIFA World Cup, but it was Kahn's shot-stopping prowess and leadership that carried the team to a surprise appearance in the finals, and allowed only three goals in the course of the competition. Despite playing much of the final match with torn ligaments in his right ring finger, Kahn was still blamed (perhaps unfairly due to the injury) for losing the championship after allowing the first goal by Brazilian striker Ronaldo off a rebound in the 67th minute. Kahn nevertheless won the Lev Yashin Award for the best goalkeeper of the tournament, and became the first goalkeeper in history to win the Golden Ball for the best individual performance. Kahn maintained his #1 spot for Euro 2004, but Germany were once again eliminated in the group stage.

Since then, Kahn has been unable to regain his former status as the undisputed world's best goalkeeper. He lost his status as the first choice goalkeeper for the national team, with team manager Jürgen Klinsmann rotating the number one spot between Kahn and his longtime competitor whom he had been attempting to fend off, Jens Lehmann of Arsenal F.C.. Kahn's hopes of playing in the 2006 World Cup were crushed on April 7, 2006, when Klinsmann announced his decision to use Lehmann as the first-choice goalkeeper, but Kahn decided to stay on as a backup for the competition. Despite their acrimonious pre-tournament battle for Germany's starting role, Kahn openly accepted Klinsmann's decision. Kahn and Lehmann embraced and shook hands as the former offered words of encouragement before the quarter-final penalty shootout against Argentina. In the postgame conference, Kahn publicly praised Lehmann for his two decisive penalty saves.

After Germany was eliminated in the semifinals by Italy, Kahn was given the start for the Third Place play-offs held on July 8, 2006. Kahn was also the captain of the team in the absence of the injured Michael Ballack, and so earned his last international appearance for Germany, which defeated Portugal 3-1. Although overshadowed by Bastian Schweinsteiger`s game-winning performance in the match, Kahn played to a high standard, pulling off several world-class saves throughout the match. Kahn deflected a shot by Portuguese forward Pauleta after he beat the German defence, and he later saved Deco's kick made from just inside the box. Following the match, Oliver Kahn announced his retirement from the German National Team. Throughout his international career he earned 86 caps for Germany, including 49 as team captain.

Private life
In 2003 Kahn split with his ex-wife Simone, with whom he has had two children, David and Catharina-Maria. The divorce occurred after he was romantically linked to former barmaid Verena Kerth. The affair with Kerth was widely publicised in German tabloids when Kahn left Simone whilst she was in the eighth month of her second pregnancy. Kahn and Kerth have been in a relationship since then. He is also an avid golf player, taking part in local tournaments during his spare time.

Public image
Kahn is a player obsessed by perfection, known to train fanatically, but he also has the tendency to erupt into fits of rage when things go wrong. A result of his seemingly overambitious attitude in the field is that he is a target for German comedians and caricaturists, who portray him as a maniac. In 1996, popular German comedian Harald Schmidt lip-synched Kahn by using ape noises and calling him "gorilla", after Kahn angrily shouted at Bayern teammate Andreas Herzog during a match.

In a TV commercial for the Paulaner brewery, he sits on a bench with a beer and sighs "on the bench, life is best," in referernce to him being benched from the German team for the 2006 World Cup; and in ads for Burger King, he sits on a bench with the caption Olli Kahn proves his size (in German, "size" also means "composure"), a reference to a new, bigger burger.

Popular culture
Kahn is the subject of the song Olli Kahn by the German pop group Die Prinzen, which was recorded during the 2002 World Cup. The song was later covered by Die Toten Hosen, another popular German band.

Trivia
Kahn was sent off in a bizarre incident against Hansa Rostock on March 3, 2001. With his Bayern Munich team losing 2-3 in the final minutes, he snuck into the area during a corner kick, jumped up, and punched the ball into the opponent's net. He immediately received his second yellow card of the game.
Prior to a 2006 match against Arminia Bielefeld in Munich, fellow Bayern Munich goalkeeper Michael Rensing peppered Kahn with practice shots. One shot hit Kahn squarely in the eye, causing enough swelling and discoloration to force him from taking the field. Television coverage of the match showed Kahn watching from the stands and laughing, apparently at the unlikely misfortune. With Rensing in goal, Bayern Munich won the match 2-0.
During a bad spell for Bayern Munich, Kahn was asked at a press conference what he felt the team lacked; his reply, translated literally from German, was: "Balls! Balls! We need balls, if you know what I mean."
Kahn released his autobiography, Nummer eins ("Number One"), in May 2004.
Kahn is named Kalm on the popular sports game Pro Evolution Soccer 6 as a result of Kahn holding the rights to his image. It is believed that the name Konami chose was in reference to his often excitable manner whilst playing football.
In the popular Football Manager series (marketed as Worldwide Soccer Manager in the United States) Kahn is known as Jens Mustermann as a result of Kahn holding the rights to his image. Mustermann translates from German into English as Sample Man and is a common placeholder name in Germany and Austria, while Jens is a reference to Jens Lehmann, Kahn's main international goalkeeping rival.