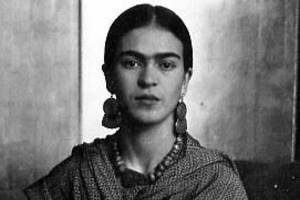 Mexican artist about whom everything was high drama. In pain all of her life, the 5' 3", 98 lb. woman battled drugs and despair, had a tumultuous marriage to her muralist husband and conducted affairs with women and men, including a passionate liaison with Leon Trotsky. Filled with a radiant and explosive fury, her paintings showed a symbolic realism and spoke to contemporary and feminist issues: the pain of love and feminine identity. She was called by Andre Breton, "a ribbon around a bomb." Her work was widely exhibited in Mexico, New York and Paris.

Kahlo was the seventh of eight daughters born to a successful German photographer, the son of Jewish Hungarians, who had emigrated to Mexico and a Mexican-Indian mother. It was her dad who introduced her to art, photography and archeology. The girl both loved and scorned her uneducated and very religious mother. There were two older half-sisters from her father's first marriage, four more older sisters, then Freda and a younger sister. As a kid, she was a tomboy and a prankster.

At the age of six, she suffered an attack of polio. Left with one leg shorter and thinner, she did a lot of sports to rebuild her strength. At 14, she entered one of Mexico's best schools. In her early teens, she was preparing for a career in medicine, until she suffered a serious auto accident at 16 in Mexico City, 9/17/1925. An electric trolley car crashed into the wooden bus in which she was riding. Freda was pierced by the trolley's metal handrail which entered her lower body on the left side and exited through her vagina. Her spinal column and pelvis were each broken in three places; her collarbone and two ribs broken as well. Her right leg, the one deformed by polio, was shattered, fractured in 11 places and her right foot was dislocated and crushed.

She spent a month in the hospital and two more recuperating at home. A lifelong series of operations followed, and her first prolonged hospitalization led to her learning to paint. After the accident, her life was spent in pain and dying, with at least 32 surgeries. In spite of this, or perhaps because of it, her intensity and appetite for life was voracious.

When Freda was 13, she had her first sexual experience with her gym teacher. Two years later she met Diego de Rivera when he painted a mural at her school, and she developed an immediate crush on him. They re-met in 1927, and began their affair. Though her mother objected to his age, 20 years older than she, and his immense weight, some 300 lbs, calling him a "fat and ungodly communist," they married in a civil ceremony on 8/21/1929.

It was a lifetime marriage despite periods of melancholy illness, separations, divorce and remarriage. He was always a philanderer and their life together was stormy. They were proud of each other, hated each other and were tender and protective of each other. He never objected to her lesbian relationships but was fiercely jealous of the men in her life, so she concealed those many affairs from him.

Her work was highly successful and continued so after her death. By 1994 there were some 87 publication about her, and her 1942 "Self-Portrait with Monkey and Parrot" sold at Sotheby's for $3.2 million, the highest price ever paid for a Latin-American work of art and the second-highest amount for a woman artist (after Mary Cassatt). In Mexico, Kahlo is known as "la heroina del dolor," (the heroine of pain).

After Frida and Diego finally divorced in 1940, Frida's poor health worsened. Her infirmity was exacerbated by her bottle-a-day brandy habit, chain smoking and steady diet of sweets. She not only had racking pain in her spine but infected kidneys, an atrophic ulcer on her right foot, from where gangrenous toes had been amputated in 1934, and recurrent fungus infections on her right hand. Reconciling with de Rivera, they remarried on his 54th birthday, 12/08/1940, in San Francisco. A woman whose motto was, "Make love, take a bath, make love again," she wrote, "Diego in my urine - Diego in my mouth - in my heart, in my madness, in my sleep."

Following the amputation of her leg in 1953, Frida became deeply depressed, losing her will to live. Several times, she tried to kill herself, by hanging or overdose. All signs point to her death as a suicide by overdose on 7/13/1954 in Mexico City. The last words in her diary are a list of people she thanked, and the lines "I hope the leaving is joyful - and I hope never to return."