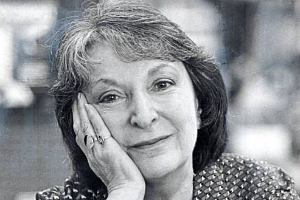 American film critic for over 30 years, known for having a "feisty, stimulating and sometimes most infuriating voice" in American movie criticism, primarily exercised in the "New Yorker" where she began writing a column in 1968.

The youngest of five children, Pauline was born to a Jewish gentleman farmer, Isaac Kael, in Sonoma County in Northern California. Her Polish-born parents had eloped because her maternal grandfather disapproved of the match. Kael and her siblings were all given music lessons by her theater-going parents. The stock market crash in 1929 changed things. The Kaels lost their land: the ten acres to which Isaac Kael had retired in his early 40s. In 1936, Pauline enrolled at the University of California and worked her way through as a philosophy student. It was there that she sharpened her argumentative skills as a debater.

In San Francisco during her late 20s, she took up with a crowd of avant-garde poets and experimental-theater types. She worked many temporary jobs to support herself, but her abrasive manner tended to make them short-lived. She was "discovered" in a coffee shop, arguing about a movie with a college friend, poet Robert Duncan, in 1953, when the editor of "City Lights" magazine asked them each to review Charlie Chaplin's "Limelight." Duncan didn't; Kael did and was a hit. She was later given a weekly radio program on KPFA, Berkeley's listener-sponsored Pacifica radio station. The program became a success and led to an offer to manage an art cinema in Berkeley owned by Edward Landberg, whom she married sometime in the late '50s. Leaving the radio show, Kael worked 16-hour days at the theater, creating displays, writing the program, and cleaning. Her Berkeley house became an after-hours "salon," where people interested in the movies could stop by for food and talk.

It was not until her late 40s that Kael was able to support herself as a writer but by 46, she reached a national audience with her first book, "I Lost It At the Movies." Editor William Abrahams had seen her essays in "Partisan Review," and he invited her to visit him when she came East. She moved to New York in 1965 and published a collection of brief reviews, "5001 Nights At the Movies." By then, assignments began to arrive from magazines that paid. She went from "Life" to "Vogue" to "McCall's" to the "New Republic" and finally found her niche when she was offered her weekly column in the "New Yorker," starting in 1968. Though it all, she was a witty champion of quality entertainment, thrashing facile commercialism and self-indulgent pretense.

In 1979 Kael moved to Hollywood to work on film production as an assistant to Warren Beatty on a project. Problems ensued with the project, but she nonetheless stayed on at Paramount as an "executive consultant," developing a few scripts that were never filmed. At the end of a five-month contract, she returned to the "New Yorker."

Kael married and divorced three times. She does not identify her first two husbands, and only reluctantly acknowledged the third, Edward Landberg. In 1948, she had a daughter, Gina James, whose father was experimental filmmaker James Broughton.

During her later years, Kael became active with helping younger writers get published or produced. She retired from the "New Yorker" in March 1991. In her later years she had Parkinson's and she died on 3 September 2001 at her home in Great Barrington, Massachusetts.