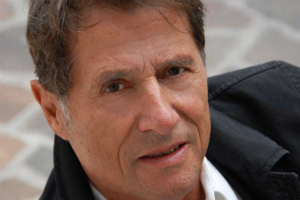 Udo Jürgens (born Udo Jürgen Bockelmann, 30 September 1934, Klagenfurt, Carinthia, Austria) is an Austrian composer and singer of popular music whose career spans over fifty years. He has written more than 800 songs and sold over 100 million records. In 2007 he additionally obtained Swiss citizenship.

He is credited with broadening German-language pop music beyond the traditional postwar schlager in the 1960s by infusing it with a modern pop appeal; his exceptionally tuneful compositions and sophisticated arrangements attract fans of all ages, and even in his 70s he continues to fill the largest concert venues in Germany, Austria, and Switzerland.

In 1950, he won a composer contest organized by Austria's public broadcasting channel ORF with the song "Je t'aime". He wrote the 1961 worldwide hit "Reach for the Stars", sung by Shirley Bassey.

In 1964, he represented Austria for the first time at the Eurovision Song Contest with the song "Warum nur warum?", finishing sixth. The UK participant, Matt Monro, was impressed with the melody and covered the song (with English lyrics by his manager Don Black) as "Walk Away," which reached number four in the UK Singles Chart and number 23 in the US Billboard Hot 100 chart.

Jürgens' song "Sag ihr, ich lass sie grüßen" came fourth in 1965's contest, and in 1966 he won the competition with "Merci, Chérie", which became an English-language hit for Vince Hill, another cover by Monro, and one of Jürgens' most recognized compositions. Jürgens' version alone sold over one million copies, and he was awarded a gold disc by Deutsche Vogue in 1966.

In the following years, he wrote some of his most famous songs, like "Griechischer Wein", "Aber bitte mit Sahne", "Mit 66 Jahren", and – one of his biggest successes – "Buenos Días, Argentina", which he performed together with the German national football team in 1978.

In 1977, he invited The Supremes to appear as guests on his televised and recorded gala concert. The Supremes (Mary Wilson, Scherrie Payne, and Susaye Green), who were on a brief farewell tour of Europe at the time, performed two of their own current hits, "You Are The Heart of Me" and "You're My Driving Wheel", as well as a duet with Jürgens' "Walk Away" in English.

In 1979, he released a disco album entitled Udo '80. It produced a hit song "Ich weiß was ich will". This song was also released as a 12 inch disco single in an extended remix for discotheques.

On 2 December 2007, the musical Ich war noch niemals in New York (I've never been to New York) opened in Hamburg's Operettenhaus. It weaves songs by Jürgens into a familial storyline, similar to the treatment of ABBA songs in Mamma Mia!, the musical it succeeded at the venue.

"Merci, Chérie", whose original German lyrics were written by Thomas Hörbiger, has been translated or adapted into several languages and covered by dozens of artists in both vocal and instrumental recordings. These versions include:

Jürgens himself recorded many of the translations for international release, including a version in Japanese. More recent covers include Belinda Carlisle's 2007 recording of the French version.

In addition to recording Cavendish's "Merci, Chérie" lyric, Matt Monro covered five more Jürgens compositions, all with English lyrics (unrelated to the German ones) written by his manager Don Black. Four of these became closely associated with the British singer (and were subsequently covered by Jürgens himself):

"Illusionen" became "If I Never Sing Another Song" (1977), which was later performed by Shirley Bassey, Sammy Davis, Jr., and other entertainers.

A fifth Jürgens song, "In Dieser Welt," became "Lovin' You Again," and in 1969 Monro recorded both Spanish and English versions, the latter not released until August 2012. (Monro also recorded Spanish versions of "Walk Away" and "The Music Played"; all three Spanish lyrics were adapted for Monro from Black's versions by Leonardo Schultz, who also produced the Spanish recordings.)

In one of his last recording sessions, Bing Crosby covered an English version of Jürgens' "Griechischer Wein" called "Come Share The Wine," which also was written by Black. The song was released after Crosby's death in 1977 as the title track of a compilation album and was later recorded by Al Martino.

In 2009 the German band Sportfreunde Stiller covered the "Ich war noch niemals in New York" together with Jürgens on their MTV Unplugged concert in Munich.

His brother, Manfred Bockelmann (born 1943), is a painter.

His daughter by his first marriage, Jenny Jürgens (born 1967), is an actress.