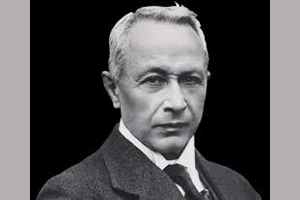 Hugo Junkers (3 February 1859 – 3 February 1935) was a German engineer who designed the Junkers J 1 in 1915. It was the first aircraft to use an all-metal skin, had a single cantilever wing and had minimal external bracing.

Born in Rheydt, Rhine Province. He studied at the Technical University of Berlin and Aachen.

He was a professor of mechanical engineering at Aachen between 1897 and 1912. Working as an engineer, Junkers devised, patented, and exploited gas engines, heaters, a calorie meter and other inventions.

His aeronautical work began in earnest only at the age of fifty. He had far-sighted ideas of metal aeroplanes and flying wings, but always realities of war dragged him back.

During World War I the government forced him to focus on aircraft production. In 1915, he developed the world's first practical all metal aircraft design, the Junkers J 1 "Blechesel (Sheetmetal Donkey), which survived on museum display in Berlin until World War II.

His firm's first military production design in 1916-17 was the armored-fuselage two seat all metal sesquiplane, the Junkers J.I, considered the best German ground attack aircraft of the war. The J.I's pattern of an armored fuselage that protected the nose mounted engine, pilot and observer in a unitized metal "bathtub", was the possible inspiration for Sergei Ilyushin's later Il-2 Shturmovik (conceivably appropriate as Junkers did have a manufacturing plant in Fili, a suburb of Moscow, in the Soviet Union in the 1920s) with a similar armored fuselage design.

By 1918 his firm had created the world's first low-winged single seat fighter aircraft, the Junkers D.I, which also pioneered the use of duralumin throughout an airframe.

However, the D.I did not enter production until 1918. He also produced a two seat fighter (pilot and rear gunner), the Junkers CL.I. Postwar Soviet aviation pioneer Andrei Tupolev and American aviation designer William Bushnell Stout each owed much to Hugo Junkers in the designs of their earlier aircraft, which benefitted from Junkers' corrugated light metal construction philosophy.

The Junkers F.13 from 1919 was the first of several successful civil aircraft designs of Junkers Flugzeugwerke including the Junkers Ju 52/3m from 1932. Through a variety of business initiatives Junkers was also active in founding and developing airlines around the globe initially aiming to sell its aircraft.

But Junkers always had more ideas: the massive four engined G.38, nicknamed "Der Grosse Dessauer", delivered to Luft Hansa made no commercial trips for many months as he repeatedly recalled it to the factory for improvements.

Junkers was a socialist and a pacifist. For these reasons, he had several occasions to cross swords with German leadership. In 1917 the government forced him into partnership with Anthony Fokker to ensure wartime production targets would be met.

During the 1920s in Germany and among Junkers' employees a wide spectrum of political views was present. About every aspect of the business, and of its environment, there were differing opinions. For members of all the many groups represented in Junkers, aviation offered hope for national renewal. Their varied views led to lively internal corporate politics. In 1926, unable to make government loan repayments after a failed venture to build planes for the USSR, he lost control of most of his businesses.

In 1933 the new Nazi government interfered and, on taking power, immediately demanded ownership of Junkers' patents and control of his remaining companies. Under threat of imprisonment he eventually acquiesced, to little avail; a year later he was under house arrest. He died on 3 February 1935 in Germany.

Hugo Junkers is mainly known in connection with aircraft bearing his name. This includes such he reluctantly developed for the German Empire during World War I, later in minor association with Anthony Fokker, as well as civil aircraft designs during the Interwar Period produced by Junkers Flugzeugwerke (Junkers Aircraft Works). Junkers, a pacifist and not on good terms with the Nazis, died in 1935 and was not involved in the development of Junkers military aircraft for the Third Reich's Luftwaffe before or during World War II.