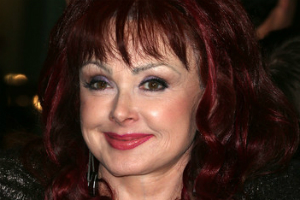 American country-western singing star of the famed duo "The Judd's" comprised of herself and daughter Wynonna. A first single in 1983 was followed with four platinum albums and four Grammy's. They sold more than 15 million albums worldwide and were the No.1 touring country act , and her youngest daughter Ashley was beginning to make a name for herself as an actress when their dream lives were shattered.

Naomi was forced to retire in 1990 with the diagnosis of hepatitis. She suffered with nausea, vomiting and jaundice, in a wheelchair and unable to finish her sentences. Acknowledging the diagnosis but not accepting the prognosis, Naomi began her "voyage of self-discovery on the path to wellness."

Reestablishing her bond with God and investigating alternative healing methods, changing her diet and taking long walks at her Tennessee farm, she spent the next three years writing her best-selling autobiography, "Love Can Build a Bridge." Her book was later made into a four-hour miniseries for TV with Naomi as co-executive producer. By then, she was well enough to take over the business management of Wynonna's singing career, 1994.

Judd was pregnant and married by the time she was 17, giving birth to daughter Wynonna, four months after the wedding. She divorced her husband of eight years after the birth of her second daughter, Ashley. Managing with jobs as a secretary and model, she entered nursing school in 1976. Judd cut a home demo tape and submitted it to RCA to start their country-western debut. She and her daughter soared to success within a short period of time before her unfortunate bout with hepatitis.

She was married to Larry Strickland, her lover and manager for 11 years, even though the romance had a rocky history. Judd filed for divorce from Strickland 8/14/2000 at the Williamson County Chacery Court in TN., alleging adultery and inappropriate marital conduct.

On 4/02/2001, Judd broke her right ankle when she stepped in a hole on her Tennessee farm.