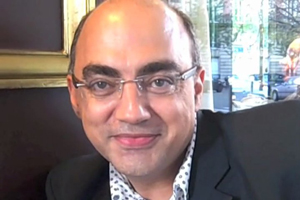 Pierre Jovanovic was journalist Matin de Paris and the Paris Daily of Philippe Tesson and editor of technological information Missive France Cables & Radio . As a writer, he popularized the theme of angels publishing the bestselling Survey existence of angels in 1993.

As of February 20, 2008, he writes a blog largely devoted to the analysis of the international financial situation. Since early 2009, he co-hosts on the community radio station Radio Here and Now , a review of international press first weekly and bi-weekly (Wednesdays at 14 pm) mainly dealing with the global economic situation. His work is based on social and economic sections of the print and visual essentially Anglo-Saxon, especially American.

In 2001, another journalist Quotidien de Paris , Henri Tricot, they launched the French publishing house "  The Garden of Books  "for the publication of documents and investigations.

Critical of the banking system, it supports Bruno Boulefkhad protesting against the bank since May 16, 2012.

In his book 777 he developed the theory of a universal bankruptcy combined with the fall of the Vatican, based on the text of the Apocalypse of St. John .

In his book Our Lady of the Apocalypse , it takes place in the case of the secret of Fatima . For him, the third secret of Fatima , published in a press conference in June 2000 by the Vatican and explaining that this vision for the attack against John Paul II , is a fake 3 .

His book Blythe Masters is a portrait of the banker JP Morgan & Co. , which invented the credit default swap .