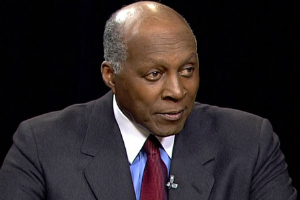 Vernon Eulion Jordan, Jr. (born August 15, 1935) is an African-American lawyer, business executive and civil rights activist in the United States. A leading figure in the civil rights movement, he was chosen by President Bill Clinton as a close adviser. Jordan has become known as an influential figure in American politics.

Vernon Jordan was born in Georgia to Mary Jordan and Vernon E. Jordan Sr; he has a brother Windsor. He is the cousin of James Shaw, a musician who is professionally billed as "The Mighty Hannibal."

Jordan grew up with his family in Atlanta's segregated society during the 1950s. He was an honor graduate of David Tobias Howard High School. Rejected for a summer intern's job with an insurance company because of his race after his sophomore year in college, he earned money for a few summers for college by working as a chauffeur to the former city mayor Robert Maddox, then a banker. Jordan graduated from DePauw University in Greencastle, Indiana, in 1957. He earned a law degree at Howard University School of Law in 1960. He is a member of the Omega Psi Phi and Sigma Pi Phi fraternities.

Jordan returned to Atlanta to join the law office of Donald L. Hollowell, a civil rights activist. The firm, including Constance Motley, sued the University of Georgia for racial discrimination in its admission policies. The suit ended in 1961 with a Federal Court order demanding the admission of two African Americans, Charlayne Hunter and Hamilton E. Holmes. Jordan personally escorted Hunter past a group of angry white protesters to the university admissions office.

After leaving private law practice in the early 1960s, Jordan became directly involved in activism in the field, serving as the Georgia field director for the National Association for the Advancement of Colored People. From the NAACP, he moved to the Southern Regional Council and then to the Voter Education Project.

In 1970, Jordan became executive director of the United Negro College Fund. He was president of the National Urban League from 1971 to 1981.

On May 29, 1980, Jordan was shot and seriously wounded outside the Marriott Inn in Fort Wayne, Indiana. He was accompanied by Martha Coleman at the time. Police thought initially that it might have been a domestic incident related to Coleman's life. Joseph Paul Franklin was acquitted in 1982 of charges of attempted murder. Then-president Jimmy Carter visited Jordan while he was recovering, an event that became the first story covered by the new network CNN. In 1996 Franklin admitted to having committed the shooting.

While still with the National Urban League, Jordan in 1981 said of the Ronald Reagan administration:

“I do not challenge the conservatism of this Administration. I do challenge its failure to exhibit a compassionate conservatism that adapts itself to the realities of a society ridden by class and race distinction.”

That year he resigned from the National Urban League to take a position as legal counsel with the Washington, D.C. office of the Dallas law firm of Akin Gump Strauss Hauer & Feld.

Jordan, a friend and political adviser to Bill Clinton, served as part of Clinton's transition team in 1992–1993, shortly after he was elected President. In the words of The New York Times:

"For Mr. Clinton, Mr. Jordan's roles have been manifold: Golfing companion. Smoother of ruffled feathers (he put the President back in touch with Zoë Baird after the withdrawal of her nomination to be Attorney General). Consoler-in-chief (after Mr. Clinton was defeated for re-election as governor in 1980, after the suicide of Vincent W. Foster Jr. in 1993). Conduit to the high and mighty (he took Mr. Clinton in 1991 to the Bilderberg conference in Germany, an exclusive annual retreat for politicians and businessmen). Go-between (he told Mike Espy he had to go as Secretary of Agriculture, helped win Warren Christopher a larger role as Secretary of State and sounded out Gen. Colin L. Powell for a Cabinet job).

In 1998, Jordan helped Monica Lewinsky, a former White House intern, after she left the White House. His role was considered controversial given the scandal that the Clinton administration had suffered because of the president's involvement with the intern. On October 1, 2003, a United States court of appeals rejected Jordan's claim for reimbursement for legal services related to assisting Clinton in scandals regarding Lewinsky and Paula Jones. Jordan asked the government to pay him $302,719, but was paid only $1,215.

Since January 2000, Jordan has been Senior Managing Director with Lazard Freres & Co. LLC, an investment banking firm. He is also a member of the board of directors of multiple corporations, including American Express, J.C. Penney Corporation, Asbury Automotive Group and the Dow Jones & Company.

He is formerly a member of the board of directors of Revlon, Sara Lee, Corning, Xerox, and RJR Nabisco during the 1989 leveraged buy-out fight between RJR Nabisco CEO F. Ross Johnson and Henry R. Kravis and his company KKR. A close friend of Jordan was the late Xerox tycoon Charles Peter McColough, who convinced Jordan to join the Board of Trustees at Xerox. McColough served as a mentor and friend of Jordan's until McColough's death.

In the 2004 presidential campaign, Jordan led debate preparation and negotiation efforts on behalf of John Kerry, the Democratic nominee for President. That year he was elected president of the Economic Club of Washington.

In 2006, Jordan served as a member of the Iraq Study Group, which was formed to make recommendations on the U.S. policy in Iraq.

He married Shirley (née Yarbrough), who died in 1985. They have a daughter, Vickee Jordan Adams, who works in media relations for Wells Fargo Home Mortgage.

In 1986, he remarried, to Ann Dibble Jordan. He has nine grandchildren, seven from his second wife's children, Janice, Mercer, and Toni.