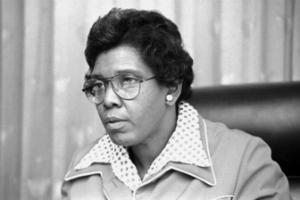 Barbara Charline Jordan (February 21, 1936 – January 17, 1996) was an American politician and a leader of the Civil Rights movement. She was the first African American elected to the Texas Senate after Reconstruction, the first southern black female elected to the United States House of Representatives, and the first African-American woman to deliver the keynote address at a Democratic National Convention. She received the Presidential Medal of Freedom, among numerous other honors. On her death she became the first African-American woman to be buried in the Texas State Cemetery.

Jordan taught political science at Tuskegee Institute in Alabama for a year. In 1960, she returned to Houston, passed the bar and started a private law practice.

Jordan campaigned unsuccessfully in 1962 and 1964 for the Texas House of Representatives. Her persistence won her a seat in the Texas Senate in 1966, becoming the first African American state senator since 1883 and the first black woman to serve in that body. Re-elected to a full term in the Texas Senate in 1968, she served until 1972. She was the first African-American female to serve as president pro tem of the state senate and served one day, June 10, 1972, as acting governor of Texas.

In 1972, she was elected to Congress, the first woman to represent Texas in the House in her own right. She received extensive support from former President Lyndon B. Johnson, who helped her secure a position on the House Judiciary Committee. In 1974, she made an influential, televised speech before the House Judiciary Committee supporting the process of impeachment of Richard Nixon, Johnson's successor as President. In 1975, she was appointed by Carl Albert, then Speaker of the United States House of Representatives, to the Democratic Steering and Policy Committee.

In 1976, Jordan, mentioned as a possible running mate to Jimmy Carter of Georgia, became instead the first African-American woman to deliver the keynote address at the Democratic National Convention. Her speech in New York that summer was ranked 5th in "Top 100 American Speeches of the 20th century" list and was considered by some historians to have been among the best convention keynote speeches in modern history. Despite not being a candidate, Jordan received one delegate vote (0.03%) for President at the Convention.

Jordan retired from politics in 1979 and became an adjunct professor teaching ethics at the University of Texas at Austin Lyndon B. Johnson School of Public Affairs. She again was a keynote speaker at the Democratic National Convention in 1992.

In 1994 and until her death in 1996, Jordan chaired the U.S. Commission on Immigration Reform, which advocated increased restriction of immigration, called for all U.S. residents to carry a national identity card and increased penalties on employers that violated U.S. immigration regulations. Then-President Clinton endorsed the Jordan Commission's proposals. While she was Chair of the US Commission on Immigration Reform she argued that "it is both a right and a responsibility of a democratic society to manage immigration so that it serves the national interest.” Her stance on immigration is cited by opponents of current US immigration policy who cite her willingness to penalize employers who violate US immigration regulations, to tighten border security, and to oppose amnesty or any other pathway to citizenship for illegal immigrants and to broaden the grounds for the deportation of legal immigrants.

Jordan supported the Community Reinvestment Act of 1977, legislation that required banks to lend and make services available to underserved poor and minority communities. She supported the renewal of the Voting Rights Act of 1965 and expansion of that act to cover language minorities; this extended protection to Hispanics in Texas and was opposed by Texas Governor Dolph Briscoe and Secretary of State Mark White. She also authored an act that ended federal authorization of price fixing by manufacturers.

In 1973, Jordan began to suffer from multiple sclerosis. She had difficulty climbing stairs and she started using a cane and eventually a wheelchair. She kept the state of her health out of the press so well that in the KUT radio documentary Rediscovering Barbara Jordan, President Bill Clinton stated that he wanted to nominate Jordan for the United States Supreme Court, but by the time he could do so, Jordan's health problems prevented him from nominating her. Jordan later also suffered from leukemia.

Jordan's partner of close to 30 years was Nancy Earl. Jordan met Earl, an educational psychologist who would become an occasional speech writer in addition to Jordan's partner, on a camping trip in the late 1960s. Jordan never publicly acknowledged her sexual orientation, but in her obituary, the Houston Chronicle mentioned her long relationship with Earl. However, one of Jordan's biographers, Mary Beth Rogers, neither confirmed nor denied that the former congresswoman was a lesbian, commenting that there were many reasons to explain why Jordan was so intensely private about her personal life. After Jordan's initial unsuccessful statewide races, advisers warned her to become more discreet and not bring any female partners on the campaign trail.

In 1992, she was awarded the Spingarn Medal from the NAACP.

In 1993, Jordan was honored with the Elizabeth Blackwell Award from Hobart and William Smith Colleges.

In 1994, Jordan was awarded the Presidential Medal of Freedom.

The many other honors given to her include her election into both the Texas and National Women's Hall of Fame; she was awarded the prestigious United States Military Academy's Sylvanus Thayer Award, becoming only the second female awardee.

The main terminal at Austin-Bergstrom International Airport is named after her, as are an elementary school in Odessa, Texas, a middle school in Cibolo, Texas; and Barbara Jordan High School in Houston. The Kaiser Family Foundation currently operates the Barbara Jordan Health Policy Scholars, a fellowship designed for people of color who are college juniors, seniors, and recent graduates as a summer experience working in a congressional office.

Many of Jordan's speeches have been collected in a 2007 publication from the University of Texas Press, Barbara Jordan: Speaking the Truth with Eloquent Thunder."

In her namesake, the Jordan/Rustin Coalition (JRC) was created in California in 2000. The organization mobilized gay and lesbian African Americans to aid in the passage of marriage equality in the state of California. Along with Bayard Rustin, a civil rights leader and close confidante of Martin Luther King, Jr., Barbara Jordan is remembered for her advocacy of progressive politics. According to its website, "the mission of the JRC is to empower Black same-gender loving, lesbian, gay, bisexual and transgender individuals and families in Greater Los Angeles, to promote equal marriage rights and to advocate for fair treatment of everyone without regard to race, sexual orientation, gender identity, or gender expression."

In 2011, actor/playwright Jade Esteban Estrada portrayed Jordan in the solo musical comedy ICONS: The Lesbian and Gay History of the World, Vol. 5 which includes the song "Nancy's Eyes" sung by the character of Jordan with music and lyrics by Estrada.