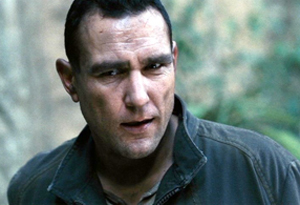 Vincent Peter "Vinnie" Jones (born 5 January 1965) is an English-born film actor and ex-footballer, having represented Wales. He has capitalised on his tough man image as a footballer and is now known as an actor for his aggressive style and intimidating demeanour.

Football career
Jones was born in Watford to a father who worked as a gamekeeper. He started his football career in 1984 at Alliance Premier League side Wealdstone, during which time he combined playing football with being a hod carrier. He played one season with second-level Swedish club IFK Holmsund in 1986 and helped them win the league.

Later that year he moved to Wimbledon for a £10,000 fee. He was part of the 'Crazy Gang' team that won the 1988 FA Cup Final against Liverpool, arguably the club's greatest achievement. He subsequently played for Leeds United, Sheffield United, and Chelsea, before moving back to Wimbledon again in 1992. He played over 250 games for the Dons, before briefly becoming player/coach of QPR in 1998. When overlooked for the vacant post of manager of QPR, he announced his retirement.

While a footballer, he became quickly infamous for his brutal "hard man" image, which frequently brought great criticism of his play. He was sent off 12 times in his career (second only to Roy Keane with 13), and holds the record for the quickest booking, having been booked after only three seconds of play. In one notorious incident he distracted Paul Gascoigne by grabbing his testicles. During another match, he ended the career of Tottenham defender Gary Stevens with a vicious tackle.

However, during his season at Leeds United -- after which they won promotion to the top-flight as Champions of Division Two -- Jones proved that he could thrive without the illegal side of his game, and under the stewardship of Howard Wilkinson received only three yellow cards in the whole season.

He also was the presenter of the infamous Soccer's Hard Men video released in 1992, which featured archived footage of himself and many other "hard men" of the game, and included advice for budding "hard men". After the release of the video, Jones was fined £20,000, banned for six months, and suspended for three years from The FA for "bringing the game into disrepute." Wimbledon chairman Sam Hammam branded Jones a "mosquito brain". Jones continued to find trouble. After exceeding 40 disciplinary points he was once again summoned to Lancaster Gate, but failed to appear. The FA banned Jones indefinitely. Jones explained that he had "mixed up" the date of the hearing; the FA imposed a four-match ban and told Jones to "grow up." Jones commented later: "The FA have given me a pat on the back. I've taken violence off the terracing and onto the pitch."

Many of Jones' fellow professionals were quick to condemn both the video and Jones himself. One of his most vocal critics was David Ginola, who said, "Jones does not deserve to be considered a footballer. Getting kicked is part of the job in France as well as England, but the real scandal is that someone like Jones gets to be a star, to make videos and become an example for kids."

A high point in his football career was when he was chosen to play international football for Wales. Though Jones is a common surname in Wales, the qualifying relationship was his grandfather on his mother's side, who came from Ruthin, north Wales. He earned nine caps and even captained the side.

Jones's international call-up was however greeted with consternation and even ridicule by Jimmy Greaves, who said, "Well, stone me! We've had cocaine, bribery and Arsenal scoring two goals at home. But just when you thought there were truly no surprises left in football, Vinnie Jones turns out to be an international player!".

Jones has stated that he would eventually like to return to football, possibly with Leeds United as a fan of the club himself. Jones told Yorkshire Radio "I will come back without a doubt, Leeds fans gave me so much and it's a club very close to my heart."

Other works
In 1998 Jones published his autobiography, "Vinnie: The Autobiography", which was later revised and reprinted a year later to include information on his 1998 feature film debut in Guy Ritchie's Lock, Stock and Two Smoking Barrels.

On 6 December 1998, Jones appeared at the World Wrestling Federation pay-per-view Capital Carnage, where he played up his 'hard man' image, acting as a special guest enforcer for the main event. Before the match he had a (staged) fight with fellow enforcer The Big Bossman and was "red carded" and kicked out. He came back at the end of the show to drink beer with "Stone Cold" Steve Austin and referee Earl Hebner. Jones returned to the promotion, now known as World Wrestling Entertainment, on 18 February 2007 at No Way Out, where he claimed he had "kicked Stone Cold's arse" on the set of The Condemned.

In May 2002, Jones played a character in the music video for Westlife's single 'Bop Bop Baby'. In November 2002, he released an album of blues and soul songs on Telstar called Respect in the UK, as his musical debut under the tuition of Phil Edwards. He also appeared in a series of UK TV advertisements for Bacardi.

Jones appeared on the first episode of the second season of the current Top Gear in their 'Star in a Reasonably Priced Car' segment. He managed to make it around the track in 1' 53".

In 2000, Jones caused controversy when he appeared in an ad for a drink called "Red Devil". In the ad, Jones is pruning flowers in his garden when he sees a robin crying because its bird feeder is empty. Jones fills the feeder, and places it on the windowsill of his kitchen. Seeing the feeder, the robin flies at it, collides with the kitchen window, and slides down the pane while Jones bursts out laughing. Many parents said the ad (which drew about 390 complaints) was tasteless, and upsetting for children. Later, the ad was shown only after the nine o'clock watershed. The ad was eventually axed.

Jones was the first ever guest host for The Friday Night Project when it first aired on Channel 4 in February 2005. In the same year he also had a minor role in the film She's the Man as coach Dinklage. As of September 2006, Jones' image and voice are being used in a campaign by UK bookmakers Ladbrokes to promote greyhound racing, a sport Jones has been connected with in the past, as a racing dog owner and an enthusiast. Jones has recently appeared as himself in an RAC commercial also featuring his wife, Tanya.

Jones narrated the TV series Vinnie Jones’ Toughest Cops. The series commenced airing in 2008 on ITV4 in the UK. Each episode to date has examined the work of a police force in a different country in the world, concentrating on dangerous aspects of the work. The first show concerned police in Colombia.

Personal life
Jones lives with his wife, Tanya, and their two children in Los Angeles; they also have a home in Hertfordshire. His son Aaron is now a member of the British Army. In 2005, he became president of Hertfordshire Agricultural Society. Jones is also President of NOBs (the National Organisation of Beaters and Pickers-up) and is a keen countrysports enthusiast.

After participating in a charity football match alongside fellow British Hollywood film actor Jason Statham, Jones was approached by a Los Angeles Galaxy scout and asked whether he would go for a trial at the club. Jones laughed off the offer by saying "You're 15 years too late".

He has had several brushes with the law. He was convicted of assaulting a neighbour in 1998. In December 2003, Jones was convicted of air rage offenses committed on a flight the previous May. Following his conviction, Bacardi withdrew the ads in which Jones appeared. In December 2008 he was treated for injuries and arrested after a bar fight at Wiley's Tavern in Sioux Falls, South Dakota. The fight is alleged to have been started over Jones attempting to join a game of pool with patrons Juan Barrera and Jesse Bickett. One of their party referred to Jones as "that guy from X-Men", which Jones took as a slight against his other roles. A scuffle ensued in which Jones dealt a headbutt to Barrera, and Bickett struck Jones with a beer glass. Jones now awaits trial which could land him in prison for over a year if convicted. Court case hearing was due 20th January 2009, Jones awaits the decision whether to charge him or not