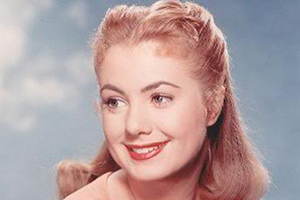 American actress of TV and film, singer and leader of the famed Partridge Family Band. She starred in the films "Oklahoma" in 1955, "Carousel" in 1956, "The Music Man" in 1962 and "Elmer Gantry" in 1960 for which she won an Oscar for Best Supporting Actress.

The TV series "The Partridge Family" ran from 1970 to 1974 with her step-son David Cassidy, and the whole cast went on to fame from their music as well as their acting series. Jones' other son, Shaun, became a rock-star in the '70s.

In 1953, 19-year-old Shirley Mae invaded New York with less than $200 in her pocket. With knees trembling, she auditioned for Rogers and Hammerstein and won the lead in not only the film version of "Oklahoma" but a job on Broadway in "South Pacific."

She divorced Jack Cassidy in 1975 after 19 years of marriage; the following year Cassidy was killed in a fire. She separated from her second husband, comedian Marty Ingels, in October 1995 after 17 years of marriage. In 1990, she and Ingels co-authored, along with Mickey Herskowitz, "Shirley & Marty, An Unlikely Love Story," William Morrow Publisher. Jones and Ingels reconciled but the road was not entirely smooth; they had another six-month trial separation in May 2000, and reconciled, moving back together on 11/10/2000. After 25 years of marriage, Jones finally filed for divorce in late February 2002.

In her 50's, Jones continued to be a huge draw in concert dates as well as serving as chairman of the National Leukemia Society and addressing menopause seminars, drawing on her own experience several years ago when a hysterectomy resulted in surgical change of life.