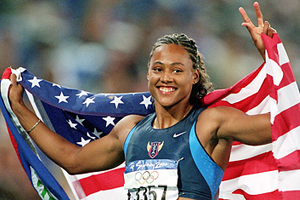 American Olympian athlete, she was the first woman to win five medals in a single Olympics. Called the fastest woman on earth, her fall from grace seemed as meteoric as her rise.

Abandoned by her biological father at a young age, Marion’s stepfather became her beloved dad. When he died in 1987, young Marion was devastated. Inspired by the likes of athletes like Jackie Joyner-Kersee and Florence Griffith Joyner, she found her niche in track and field events. In high school she began to show her athletic talents to the nation.

On 12 June 1991, age 15, she set a high school record for 200 meters and was invited to be on daytime TV’s “Good Morning America.” She continued to set records and earn kudos throughout her high school years for both track and field events as well as in basketball. In late 1991 “Track and Field,” a well-known sports publication, named her female high school athlete of the year. In 1992, she added long-jump records to her high school commendations.

In June 1992, not yet 17 years old, she tried out for the Olympics and was named an alternate for the US 400 relay team. A year later, she was happy to accept a basketball scholarship to the University of North Carolina at Chapel Hill where she continued her phenomenal rise in athletic history. An unfortunate bone fracture in her left foot prevented her from participating in the 1996 Olympics.

While at the university, she began dating a strength coach, a bronze-medal winning shot-putter, C.J. Hunter, who was seven years her senior and a divorced father of two. Shortly after their engagement, she quit basketball to concentrate on track. In competition after competition, in the US and abroad, she racked up records and medals. Using her growing fame in the meantime she began to publicly raise issues of pay parity for women in athletics.

She married Hunter on 3 October 1998 and together they trained for the upcoming Olympics. Setting her sites on her goal of taking five Gold medals at the Olympics, she said, "Right now, at 24, I think I can do what I say I can do. I've always been that way. As a kid I was a little badass, confident, able to walk around and do it all, or at least think I could do it all. ... My ultimate goal is to be mentioned in the same sentence as Michael Jordan, Muhammad Ali or Pele."

On September 24, 2000, in Sydney, Australia, she won her first Olympics gold medal. She racked up five medals all together, three gold medals for the 100 meters, 200 meters and 1600 meter relay and two bronze medals for her feats in the long jump and 100-meter relay. When the events were over, she had become the first woman to win five medals in a single Olympics. Her joy was slightly tarnished by reports that her husband, unable to compete because of an injury, had been accused of illegally using steroids to boost his performance. Two years later the couple divorced.

On 28 June 2003 she delivered her first child, a son named Tim Montgomery, Jr. after his dad, her boyfriend. Tim Montgomery, Sr., was a world-class sprinter who became implicated in illegal use of performance-enhancing drugs. Despite accusations against her, Marion denied that she herself had ever used such drugs, and drug tests largely showed negative results. Investigators weren’t convinced, and rumors continued to swirl. A news article of 23 June 2006 reported that one drug test had proven positive but when a later test resulted in a negative, she was allowed to continue competing.

She married for the second time on 24 February 2007, this time to Obadele Thompson. Like Jones, Thompson was a 2000 Olympic medalist. Together they had a child born in July 2007. A few months later, on October 5th, she admitted lying to the authorities about using illegal drugs even before the 2000 Olympics and making false statements about a check fraud scheme in which her former boyfriend, Tim Montgomery, was allegedly involved.

On 12 December 2007 the International Olympics Committee stripped her of her Olympics medals and banned her from the 2012 Beijing games. Disgraced and financially broke, the former Olympian was sentenced to six months in jail. She reported to prison on March 7, 2008.