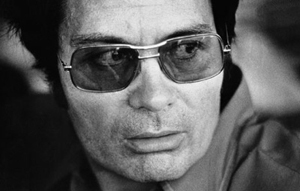 James Warren "Jim" Jones (May 13, 1931 – November 18, 1978) (birth time source : Astrodatabank, Frank C. Clifford, Zip Dobyns) was the American founder of the Peoples Temple group, which became synonymous with group suicide after the November 18, 1978 mass murder - suicide by poison in their isolated agricultural intentional community called Jonestown, located in the country of Guyana. Nine-hundred-and-nine (909) people were allegedly convinced or forced to drink cyanide as the only way to escape the potential threat brought to the group after Jim Jones ordered his men to kill visiting Congressman Leo Ryan and numerous members of his entourage.

Early life and founding of Temple
Jones was born in Lynn, Indiana to Lynetta Putnam and James Thurman Jones. He graduated from high school at Richmond High School in Richmond, Indiana. He became a preacher in the 1950s.

He obtained a bachelors degree at Butler University in 1961, and after graduate school from Indiana University in Bloomington, IN, Jim sold pet monkeys door-to-door to raise the money to fund his own church that would be named Wings of Deliverance. He later renamed his church the Peoples Temple, located in Indianapolis. He gained respectability when he became an ordained minister in 1964 in- the mainstream Christian denomination, Disciples of Christ. The church was exceptional for its equal treatment of African Americans and many of them became members of the church.

He started a struggle for racial equality and social justice, which he dubbed apostolic socialism. Jones authored a booklet, called "The Letter Killeth" pointing out what he felt were the contradictions, absurdities, and atrocities in the Bible, but the booklet also stated that the Bible contained great truths. As a child, Jones had even memorized the entire New Testament, and often held barn preachings at his local childhood home. At one point during these sessions the people listening to Jones were locked in and were unable to leave, when asked why they couldn't leave Jones had a weird smirk on his face, somewhat sinister looking. Friends and acquaintances of the preacher would see this face often in the future years to come. He was particularly fascinated with how he could manipulate people.

Rather than quitting after he got what he wanted, Jones pushed the envelope to see just how far he could go before the person objected. Throughout the years the young man perfected his craft and was very skilled in his new found art. He claimed to be an incarnation of Jesus, Akhenaten, Buddha, Lenin, and Father Divine and performed supposed miracle healings to attract new members. Members of Jones' church called Jones "Father" and believed that their movement was the solution to the problems of society and many did not distinguish Jones from the movement. The group gradually moved away from the mainstream.

Main article: Jonestown
In the summer of 1977, Jones and most of the 1000 members of the Peoples Temple moved to Guyana from San Francisco after an investigation into the church for tax evasion was begun. Jones named the closed settlement Jonestown after himself. His intention was to create an agricultural utopia in the jungle, free from racism and based on socialist principles.

People who had left the organization prior to its move to Guyana told the authorities of brutal beatings, murders and of a mass suicide plan, but were not believed. In spite of the tax evasion allegations, Jones was still widely respected for setting up a racially mixed church which helped the disadvantaged. Around 70% of the inhabitants of Jonestown were black and impoverished. The religious scholar Mary McCormick Maaga argued that Jones' authority waned after he moved to the isolated commune, because there he was not needed anymore for recruitment and he could not hide his drug addiction from rank and file members. Consequently, he lost some of his power over inner-circle members. In November 1978, U.S. Congressman Leo Ryan led a fact-finding mission to the Jonestown settlement in Guyana after allegations by relatives in the U.S. of human rights abuses. Ryan's delegation arrived in Jonestown on November 15 and spent three days interviewing residents. They left hurriedly on the morning of Saturday November 18 after an attempt was made on Ryan's life. They took with them roughly 15 Peoples Temple members who wished to leave. Delegation members later told police that, as they were boarding planes at the airstrip, a truckload of Jones' armed guards arrived and began to shoot at them. At the same time, one of the supposed defectors, Larry Layton, drew a weapon and began to fire on members of the party. When the gunmen left, six people were dead: Representative Ryan, Don Humphrey, a reporter from NBC, a cameraman from NBC, a newspaper photographer, and one defector from the Peoples Temple. The former California State Senator Jackie Speier, a staff member for Rep. Ryan in 1978, Richard Dwyer, the Deputy Chief of Mission from the U.S. Embassy at Georgetown and allegedly an officer of the Central Intelligence Agency, and a producer for NBC News, Bob Flick, survived the attack.

Later that same day, 909 of the remaining inhabitants of Jonestown, 276 of them children, died in what has commonly been labeled a mass suicide. However, there is much ambiguity over whether many who died committed suicide or were in fact murdered. While some followers obeyed Jones' instructions to commit "revolutionary suicide" by drinking cyanide-laced grape flavored Flavor Aid (often misidentified as Kool-aid), others died by forced cyanide injection or by shooting. Jones was found dead sitting in a deck chair with a gunshot wound to the head, although it is unknown if he had been murdered or committed suicide. The autopsy on his body showed levels of the barbiturate pentobarbital that could have been lethal to humans who have not developed physiological tolerance. His drug usage (including various LSD and marijuana experimentations) was confirmed by his son, Stephan, and Jones's doctor in San Francisco.

Other issues
Jones was married to Marceline Jones. They had two sons together, one biological and one adopted. Their biological son, Stephan Gandhi Jones, did not take part in the mass suicide because he was away, playing with the Peoples Temple basketball team in a game against the Guyanese national team. Jones' adopted son, Jim Jones Jr., was African American. Jim and Marceline were the first white couple in Indiana to adopt an African American child . Jones claimed to be the biological father of John Victor Stoen, who was the legal son of Grace Stoen and her husband Timothy Stoen. The custody dispute over Stoen had great symbolic value for the Peoples Temple and intensified the conflict with its opponents who consisted of, among others, a group called the "Concerned Relatives".

Marceline and Jim Jones' son Stephan Jones is today a businessman and family man, married with three children of his own. He appeared in the recent documentary Jonestown: Paradise Lost which aired in the USA on the History Channel. He states that he won't watch the film and that he does not mourn his father, only his mother Marceline Jones.

In MacArthur Park, Los Angeles on December 13, 1973, Jones was arrested and charged with soliciting a man for sex in a movie theater bathroom known for homosexual activity. The man, as it turns out, was an undercover Los Angeles Police Department vice officer. Jones is on record as later telling his followers that he was "the only true heterosexual", but at least one account exists of his sexually abusing a male member of his congregation in front of the followers, ostensibly to prove the man's own homosexual tendencies.

One of his sources of inspiration was the controversial cult leader Father Divine. Jones had borrowed the term "revolutionary suicide" from Black Panther leader Huey Newton who had argued "the slow suicide of life in the ghetto" ought to be replaced by revolutionary struggle that would end only in victory (socialism and self determination) or revolutionary suicide (death).