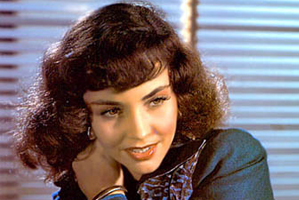 American actress who won the Oscar for Best Actress in 1943 for her first important role in "The Song of Bernadette." Her portrayal of the 19th century maid of Lourdes who claimed to see the Virgin Mary was an overnight sensation and propelled Jennifer Jones into the spotlight. Her other films include "Love Letters," and "Duel in the Sun."

An extraordinarily beautiful child with dark eyes and dark hair, Phyllis Lee Isley was born in rural Oklahoma. Her parents, Phil and Flora Mae, had a small acting troop called the "Isley Stock Company," and performed in tent shows around the Midwest. While most children only dream of becoming a "star," little Phyllis was living that reality from the very beginning, and even learned to walk backstage. Her parents settled in Oklahoma City, OK in September 1925, where Phyllis was soon enrolled at the Edgemere Public School. Her first role, at the age of six, was her portrayal of a candy cane in her first grade play. Sometimes shy and seemingly embarrassed by the fuss made over her by the actors in her parents’ company, Phyllis helped out during summer vacations and after school, by selling tickets and refreshments, and decided she would be an actress. Her father purchased several independent movie theaters in 1929, where she spent much of her time, increasing her determination to become an actress.

After graduating from high school, she enrolled in Monte Cassino, a junior college for girls, run by Benedictine sisters. Phyllis was different from the other girls because she was more interested in her planned career than she was in dating. She appeared in several school plays, usually in the leading role. Her enthusiasm for acting was evident, and her father suggested she go to Hollywood and use his connections to try and land a movie contract. Phyllis, however, was fascinated with Broadway and a life in the theater; a trip to New York when she was nine had peaked her curiosity in that direction.

She chose instead to enroll at Northwestern University in Evanston, Illinois, because it was reported to have an excellent drama department, but her expectations were not fulfilled. Restless because she didn’t feel challenged by her studies, she decided to contact her idol, stage great Katherine Cornell and ask her advice whether she should continue her education or get stage experience. When Cornell replied and suggested that it was "cultural background" that was needed, Phyllis left Northwestern and enrolled at the American Academy of Dramatic Arts in New York. With her parents’ aid, she established a residence at the Barbizon Hotel for women, and planned her audition. Her chosen scene, from "Romeo and Juliet," was well received, and she was admitted to the Academy in the fall of 1937.

Phyllis met Robert Walker, her future husband, at the Academy. A fellow student, they became close friends who shared a passion for acting and a common dream; it wasn’t long until they were inseparable. When Robert quit the Academy in the fall of 1939, Phyllis quit as well. Unable to locate work and finding prospects in New York bleak, they moved to Tulsa and took a 13-week stint on a radio program, "The Phyllis Isley Radio Theater," under her father’s guidance. Eventually they moved on to Hollywood, where Phyllis found work at the low budget Republic Studios. Her first film role consisted of a week’s work in a John Wayne "Three Musketeers" western called "New Frontier." Disheartened, they moved back to New York where she began modeling hats.

Returning to Hollywood once more, her talent was spotted by the brilliant independent producer David O. Selznick. Phyllis captivated him, and eventually she became his obsession. While waiting for the perfect role to launch her career, he encouraged her to change her name professionally, and they decided on Jennifer Jones. Her new name was announced in January 1941, when she was heralded as Selznick’s latest discovery and hinted that her first project would soon be announced. "The Song of Bernadette," seemed the perfect vehicle to debut this charming, talented actress, and Jennifer got the call for testing in October 1942. Two months later, she was informed that the part was hers.

Selznick nurtured Jennifer’s career and chose films with diverse characterizations to avoid typecasting. Her roles ranged from sweet and innocent to the sultry siren, and she was cast as characters from both contemporary and classic literature. Despite her talent and his watchful eye, Jennifer’s career slumped in the late 1940s-early 1950s. Her star rebounded with the mid-1950’s release of "Love is a Many Splendored Thing," only to drop again after the disastrous "A Farewell to Arms." For the next three years, Jennifer was off screen. Her return appearance in 1961’s "Tender is the Night" was poorly received by the public. A strong supporting role in the epic, "The Towering Inferno," in 1974 marked her final return to acting; the huge box office success put Jennifer’s career back on track once again.

Her relationship with David O. Selznick intensified over the years, and they exchanged wedding vows on 7/13/1949 in a ceremony on a yacht off the coast of Italy, and set up residence in Beverly Hills, CA. Jennifer’s first pregnancy with Selznick ended in miscarriage in 1951,and their only daughter, Mary Jennifer, was born on 8/12/1954. Selznick died in 1965, after which Jennifer fell into a long depression. Their daughter became increasingly unstable after her father’s death, and committed suicide on 5/11/1976, jumping to her death from the 22nd floor of a building in West Hollywood. Jennifer was left devastated and deeply depressed.

A few years later, she met Simon Norton, a multi-millionaire art collector, and it was love at first sight. After a whirlwind romance, they married on 5/29/1981 on a boat in the English Channel, and they embarked on their new life together. Unfortunately, Norton’s health deteriorated after he was diagnosed with Guillain Barre Syndrome in 1985, and on 6/01/1993, he left Jennifer a widow for the second time.

Jennifer’s own problems with depression led to a reported suicide attempt in the late 1960s, although she later claimed it was an accident. After ingesting an overdose of pills, she was found unconscious on Malibu Beach, CA. After this incident, Jennifer displayed great personal interest in mental health causes. She spent many hours with her personal analyst, working through her own problems, and began donating large sums of money to charities. Her daughter’s suicide deepened this commitment, and Jennifer donated one million dollars to establish the Jennifer Jones Simon Foundation for Mental Health and Education.

There would be no return to the silver screen for Jennifer; she retired from acting in 1977. Although remaining active on the Norton Simon Foundation Board and continuing her contributions to mental health organizations, she is not active in the film community and shuns personal interviews. She appeared at the 1987 Academy Awards as well as the American Film Institute Tributes to Lillian Gish and Gregory Peck. She was the recipient of the Lifetime Achievement Award at the German Film Awards in 1997, and, looking radiant, she made a rare public appearance at the 1998 Academy Awards, where she was honored, along with other past winners, in a special tribute.