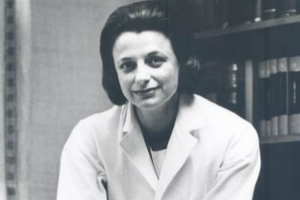 Virginia Eshelman Johnson (February 11, 1925 – July 24, 2013) was an American sexologist and psychologist, best known as the junior member of the Masters and Johnson sexuality research team. Along with her then husband William H. Masters, she pioneered research into the nature of human sexual response and the diagnosis and treatment of sexual disorders and dysfunctions from 1957 until the 1990s.

Johnson was born in Springfield, Missouri, on February 11, 1925, the daughter of Edna (née Evans) and Hershel Harry Eshelman, a farmer. Her paternal grandparents were members of the LDS church, and her father had Hessian ancestry. Johnson divorced her first husband, with whom she had had two children – Scott Forstall and Lisa Evans – in 1956. Throughout her years in school, Johnson was ahead of her peers academically and was able to skip several grades. She was an avid piano player and read extensively. Johnson was a talented singer and she would often perform for the elected officials through her mother's job as a Republican State Committee woman. These performances led to a job as a country music singer for radio station KWTO in Springfield, where she adopted the stage name of Virginia Gibson.

At the age of 16, Johnson began her freshman year at Drury University in Missouri. Instead of continuing with school, Johnson was hired to work in the state insurance office, and she did this for four years. In order to pursue her passion for music, Johnson later studied at the University of Missouri and the Kansas City Conservatory of Music. In 1957, Johnson decided she no longer wanted to pursue a singing career. She enrolled at Washington University in St. Louis in hopes to earn a degree in sociology. While Johnson never earned a degree, Masters did train her in medical terminology, therapy, and research while working as his assistant.

Johnson met Masters in 1957 when he hired her as a research assistant at the Department of Obstetrics and Gynecology at Washington University in St. Louis. Together they developed polygraph-like instruments that were designed to measure sexual arousal in humans. Using these tools, Masters and Johnson observed and measured around 700 men and women who agreed to have intercourse or masturbate in their laboratory. By observing these subjects, Johnson helped Masters to identify the four stages of sexual response. This came to be known as the human sexual response cycle. The cycle consists of the excitement phase, plateau phase, orgasmic phase, and resolution phase. In 1964, Masters and Johnson established their own independent nonprofit research institution in St. Louis called the Reproductive Biology Research Foundation; this center was renamed the Masters and Johnson Institute in 1978.

The pair married in 1971; Masters divorced his first wife to marry Johnson.

In April 2009, Thomas Maier reported in Scientific American that Johnson had serious reservations about the Masters and Johnson Institute's program to convert homosexuals into heterosexuals, a program which ran from 1968 to 1977.

Masters and Johnson divorced in 1992, largely ending their work together. Masters died in 2001. Virginia Johnson died in July 2013 "of complications from several illnesses".