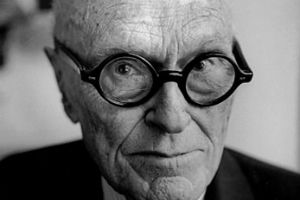 In 1930, he founded the Department of Architecture and Design at the Museum of Modern Art in New York City. In 1978 he was awarded an American Institute of Architects Gold Medal and in 1979 the first Pritzker Architecture Prize. He was a student at the Harvard Graduate School of Design. Johnson was gay, and has been called "the best-known openly gay architect in America." He came out publicly in 1993.

Johnson died in his sleep while at the Glass House retreat. He was survived by his life partner of 45 years, David Whitney, who died later that year at age 66.

Johnson was born in Cleveland, Ohio. He was descended from the Jansen family of New Amsterdam, and included among his ancestors the Huguenot Jacques Cortelyou, who laid out the first town plan of New Amsterdam for Peter Stuyvesant. He attended the Hackley School, in Tarrytown, New York, and then studied at Harvard University as an undergraduate, where he focused on history and philosophy, particularly the work of the Pre-Socratic philosophers. Johnson interrupted his education with several extended trips to Europe. These trips became the pivotal moment of his education; he visited Chartres, the Parthenon, and many other ancient monuments, becoming increasingly fascinated with architecture.

In 1928 Johnson met with architect Ludwig Mies van der Rohe, who was at the time designing the German Pavilion for the 1929 Barcelona International Exposition. The meeting was a revelation for Johnson and formed the basis for a lifelong relationship of both collaboration and competition.

Johnson returned from Germany as a proselytizer for the new architecture. Touring Europe more comprehensively with his friends Alfred H. Barr, Jr. and Henry-Russell Hitchcock to examine firsthand recent trends in architecture, the three assembled their discoveries as the landmark show "The International Style: Architecture Since 1922" at the Museum of Modern Art, in 1932. The show was profoundly influential and is seen as the introduction of modern architecture to the American public. It introduced such pivotal architects as Le Corbusier, Walter Gropius, and Mies van der Rohe. The exhibition was also notable for a controversy: architect Frank Lloyd Wright withdrew his entries in pique that he was not more prominently featured.

As critic Peter Blake has stated, the importance of this show in shaping American architecture in the century "cannot be overstated." In the book accompanying the show, coauthored with Hitchcock, Johnson argued that the new modern style maintained three formal principles: 1. an emphasis on architectural volume over mass (planes rather than solidity) 2. a rejection of symmetry and 3. rejection of applied decoration. The definition of the movement as a "style" with distinct formal characteristics has been seen by some critics as downplaying the social and political bent that many of the European practitioners shared.

Johnson continued to work as a proponent of modern architecture, using the Museum of Modern Art as a bully pulpit. He arranged for Le Corbusier's first visit to the United States in 1935, then worked to bring Mies and Marcel Breuer to the US as emigres.

From 1932 to 1940, Johnson openly sympathized with Nazism, so by June the Office of Naval Intelligence marked him as suspected of being a spy, expressed antisemitic ideas, and was involved in several right-wing and fascist political movements. Regarding this period in his life, he later said, "I have no excuse for such unbelievable stupidity... I don't know how you expiate guilt."

During the Great Depression, Johnson resigned his post at MoMA to try his hand at journalism and agrarian populist politics. His enthusiasm centered on the critique of the liberal welfare state, whose "failure" seemed to be much in evidence during the 1930s. As a correspondent, Johnson observed the Nuremberg Rallies in Germany and covered the invasion of Poland in 1939. The invasion proved the breaking point in Johnson's interest in journalism or politics– he returned to enlist in the US Army. After a couple of self-admittedly undistinguished years in uniform, Johnson returned to the Harvard Graduate School of Design to finally pursue his ultimate career of architect.

Johnson's early influence as a practicing architect was his use of glass. The Glass House (1949) - he designed as his own residence in New Canaan, Connecticut - was a profoundly influential work, but "universally viewed as having been derived from" the Farnsworth House, according to Alice T. Friedman. Johnson curated an exhibit of Mies van der Rohe work at the Museum of Modern Art in 1947, featuring a model of the glass Farnsworth House.

The concept of a Glass House set in a landscape with views as its real "walls" had been developed by many authors in the German Glasarchitektur drawings of the 1920s, and already realized by Johnson's mentor Mies. The building is an essay in minimal structure, geometry, proportion, and the effects of transparency and reflection.

The house sits at the edge of a crest on Johnson's estate overlooking a pond. The building's sides are glass and charcoal-painted steel; the floor, of brick, is not flush with the ground but sits 10 inches above. The interior is an open space divided by low walnut cabinets; a brick cylinder contains the bathroom and is the only object to reach floor to ceiling.

Johnson continued to build structures on his estate as architectural essays. Offset obliquely fifty feet from the Glass House is a guest house, echoing the proportions of the Glass House and completely enclosed in brick (except for three large circular windows at the rear, set in wooden frames, 5 feet in diameter, which reveal the interior of the building that was originally designed with a window in each of three rooms, two guest bedrooms at each end and a study in the middle). It now contains a bathroom, library, and single bedroom with a vaulted ceiling and shag carpet. It was built at the same time as the Glass House and can be seen as its formal counterpart. Johnson stated that he deliberately designed it to be less than perfectly comfortable, as "guests are like fish, they should only last three days at most".

Later, Johnson added a painting gallery with an innovative viewing mechanism of rotating walls to hold paintings (influenced by the Hogarth displays at Sir John Soane's house), followed by a sky-lit sculpture gallery. The last structures Johnson built on the estate were a library and a reception building, the latter, red and black in color and of curving walls. Johnson viewed the ensemble of one-room buildings as a total work of art, claiming that it was his best and only "landscape project."

The Philip Johnson Glass House is a site of the National Trust for Historic Preservation and now open to the public for tours.

After completing several houses in the idiom of Mies and Breuer, Johnson joined Mies van der Rohe as the New York associate architect for the 39-story Seagram Building (1956). Johnson was pivotal in steering the commission towards Mies by working with Phyllis Lambert, the daughter of the CEO of Seagram. The commission resulted in the iconic bronze-and-glass tower on Park Avenue. The structure was designed by Mies while the lobby and other internal aspects were designed by Johnson including the Four Seasons and Brasserie restaurants.

Completing the Seagram Building with Mies also decisively marked a shift in Johnson's career. After this accomplishment, Johnson's practice grew as projects came in from the public realm, including coordinating the master plan of Lincoln Center and designing that complex's New York State Theater. Meanwhile, Johnson began to grow bored with the orthodoxies of the International Style he had championed.

Although startling when constructed, the glass and steel tower (indeed many idioms of the modern movement) had by the 1960s become commonplace the world over. He eventually rejected much of the metallic appearance of earlier International Style buildings, and began designing spectacular, crystalline structures uniformly sheathed in glass. Many of these became instant icons, such as PPG Place in Pittsburgh and the Crystal Cathedral in Garden Grove, California.

Johnson's architectural work is a balancing act between two dominant trends in post-war American art: the more "serious" movement of Minimalism, and the more populist movement of Pop Art. His best work has aspects of both movements. Johnson's personal art collection reflected this dichotomy, as he introduced artists such as Mark Rothko to the Museum of Modern Art as well as Andy Warhol. Straddling between these two camps, his work was seen by purists of either side as always too contaminated or influenced by the other. With his thick, round-framed glasses, Johnson was the most recognizable figure in American architecture for decades. As an art collector Johnson's eclectic eye supported avant-garde movements and young artists often before they became widely known. His collection of American art was strong in Abstract expressionism, Pop Art, Minimalism, Neo-Dada, Color Field, Lyrical Abstraction, and Neo-Expressionism and he often donated important works from his collection to institutions like MoMA, and other important private museums and University collections like the Norton Simon Museum, the Sheldon Museum of Art and the Iris & B. Gerald Cantor Center for Visual Arts at Stanford University among many others.

From 1967 to 1991 Johnson collaborated with John Burgee. This was by far Johnson's most productive period — certainly by the measure of scale — he became known at this time as builder of iconic office towers, including Minneapolis's IDS Tower opened 1972. That building's distinctive stepbacks (called "zogs" by the architect) created an appearance that has since become one of Minneapolis's trademarks and the crown jewel of its skyline. In 1980, the Crystal Cathedral was completed for Rev. Robert H. Schuller's famed megachurch, which became a Southern California landmark.

The AT&T Building completed in 1984 in Manhattan, now the Sony Building, was immediately controversial for its neo-Georgian pediment (Chippendale top) characteristic for Postmodernism architecture and close - in concept - to the 1982 Humana Building by Michael Graves. At the time, it was seen as provocation on a grand scale: crowning a Manhattan skyscraper with a shape echoing a historical wardrobe top defied every precept of the modernist aesthetic: historical pattern had been effectively outlawed among architects for years. In retrospect other critics have seen the AT&T Building as a flagship of Postmodernism, necessary in the context of modernism's aesthetic cul-de-sac. In 1987, Johnson was awarded an honorary doctoral degree from the University of Houston. The institution's Hines College of Architecture is also housed in one of Johnson's buildings.

Johnson's publicly held archive, including architectural drawings, project records, and other papers up until 1964 are held by the Drawings and Archives Department of Avery Architectural and Fine Arts Library at Columbia University, the Getty, and the Museum of Modern Art.