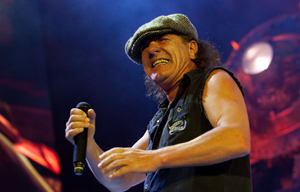 Brian Johnson (born October 5, 1947) is a British singer and songwriter, best known as the lead vocalist for the Australian hard rock band, AC/DC since April 1980. He currently lives in Sarasota, Florida.

In 1972, Johnson formed the glam rock band Geordie and became their lead singer. However, after a few hit singles, the band split up in 1978. Johnson reformed Geordie in 1980, however, just after a record deal had been signed, he was asked to audition for AC/DC. A few days after the audition.

Johnson was told he would be replacing deceased Bon Scott as the lead vocalist of the band. Scott passed away after his last album Highway To Hell. Johnson's first album with AC/DC, Back in Black, is the band's best selling album and ranks among the top-selling albums of all time.

Johnson's sartorial trademark is his cap. Originally, he wore a flat cap, once regarded as a symbol of his native Tyneside, but in recent years, he has occasionally worn a baseball cap instead.

In August 1978, when Geordie played at The Stoneleigh Club, Porthcawl, Wales, Brian Johnson came to blows with a bouncer. His nose was broken, and he sported two black eyes on the front of the next day's newspapers. Police were called, and the bouncer was eventually sentenced to imprisonment for three months.

Brian Johnson was born October 5, 1947. Johnson's father, Allan, was a Sergeant Major of the British Army's Durham Light Infantry; his mother, Esther, came from Italy. When he was young, Johnson performed in various shows with the Scouts, and appeared in a play which aired on television, and joined a local church choir. Brian has a wife named Brenda.

AC/DC
At the AC/DC audition , Johnson sang the songs; "Whole Lotta Rosie" and "Nutbush City Limits" (Ike & Tina Turner). A few days later, the band told Johnson he would be the new vocalist of AC/DC.

Johnson's first album with AC/DC, Back in Black (1980), is now regarded as a hard rock landmark.

From 1980, Johnson had co-written all of AC/DC's songs, with Angus and Malcolm Young until personal matters diverted him in 1990, when The Razors Edge was being written. Since then, the Young brothers have written all of AC/DC's material. However, Johnson is writing the lyrics for the band's new album, due for release in 2008.

Helen of Troy musical
Since April 2003, Johnson has been working on a musical version of Helen of Troy with Sarasota Ballet choreographer, Robert de Warren. The musical is a Les Miserables-style musical with rousing anthems, tender ballads and minimal dialogue. He conceived the project with writers Ian La Frenais, Dick Clement and Brendan Healy after seeing Andrew Lloyd Webber's musical, Cats, and describing it as, "fucking shite, wrist-cuttingly bad".

Malcolm McDowell, who made his recording debut singing one of the songs for the soundtrack in Brian's studio, has agreed to play Zeus. The Cranberries singer Dolores O'Riordan and Bruce Vilanch are also set to participate.

A small public performance, that featured songs written for the musical, was given in New York on June 13, 2005.