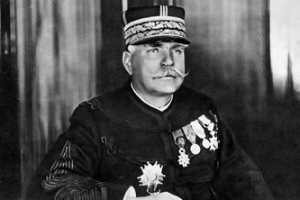 Marshal Joseph Jacques Césaire Joffre, G.C.B., O.M. ( 12 January 1852 – 3 January 1931), was a French general during World War I. He is most known for regrouping the retreating allied armies to defeat the Germans at the strategically decisive First Battle of the Marne in 1914. His popularity led to his nickname Papa Joffre.

Joffre was born in Rivesaltes, Roussillon, the son of a French Catalan family of vineyard owners. He entered the École Polytechnique in 1870 and became a career officer. He first saw active service during the Siege of Paris in the Franco-Prussian War, but spent much of his career in the colonies as a military engineer, serving with distinction in the Keelung Campaign during the Sino-French War (August 1884–April 1885). He returned to France and was made commander-in-chief of the French Army (1911), after General Joseph Gallieni declined the post. With the revival of the army and a purge of "defensive-minded" officers he adopted the strategy devised by General Ferdinand Foch, the offensive known as Plan XVII. Joffre was selected to command despite never having commanded an Army, even on paper, and "having no knowledge whatever of General Staff work."

Battle of the Frontiers

At the outbreak of war, the French plan clashed with the German Schlieffen Plan, much to the detriment of the French. On 15 August, after German cavalry had been spotted at Dinant on the Meuse, and after repeated warnings from Lanrezac (commander of the Fifth Army) Joffre issued his Instruction Particuliere No 10, stating that the main German effort would come through Belgium.

Although Joffre was aware (8am on 18 August) that as many as fifteen German corps were moving through Belgium (in fact it was sixteen, and twenty-eight if the German Fourth and Fifth Armies are also included), he believed that only a few of these would come west of the Meuse, where he believed they could be held by the British and Belgians. French Third and Fourth Armies were preparing to attack into the Ardennes, and he wanted Lanrezac’s Fifth Army to attack the bulk of the German right wing on its west flank as – it was assumed – it attacked the left flank of French Fourth Army.

French First and Second Armies attacked into Alsace-Lorraine on 19 and 20 August and were beaten back with severe loss by German forces which were preparing for a counteroffensive. Joffre believed (20 August) that Liege was still holding out (in fact the last of the Liege forts had fallen on 16 August), and hoped that Lanrezac would be able to link up with Namur, which was expected to hold out for even longer. The Germans entered Brussels that day, but Joffre was convinced, after the defeat in Alsace-Lorraine and air and cavalry reports of strong German forces in Belgium, that the German centre in the Ardennes must be weak. On 21 August French Second Army was pressed by a German counterattack. De Castelnau asked for permission to abandon Nancy and its fortified heights, but Joffre forbade him to do so.

With French Third and Fourth Armies now attacking into the Ardennes, the infantry outpacing their horsedrawn artillery, Bulow’s German Second Army attacked Lanrezac’s French Fifth Army and forced bridgeheads across the Meuse. Fifth Army was also now attacked on its right by Hausen’s German Third Army; although these attacks were held, Lanrezac asked Joffre for permission to retreat. On 23 August Fifth Army was attacked again.

On 23 August Joffre reported to the French War Minister that his Fourth Army was pressing into the Ardennes with (he believed, wrongly) local numerical superiority, despite the fact that he had already received reports of French defeats in this sector on previous days. German Fourth Army and Fifth Armies were in fact advancing against the French forces in front of them rather than moving westwards as Joffre believed. In his memoirs Joffre later admitted that he had been mistaken (he was also unaware of the fall of Namur and of the extent of the fighting at Mons and Charleroi on his left), but at the time he demanded that Fourth Army resume the offensive and provide lists of unsatisfactory officers for dismissal. Messimy (War Minister) fully supported Joffre in his purging of unsuccessful generals, even suggesting that, as in 1793, some of them simply ought to be shot.

On 25 August, rejecting the advice of his staff officer General Berthelot that Lanrezac’s Fifth Army be ordered to attack westwards against the inside of the German right wing, he instead had Major Gamelin draw up plans for a French concentration at Amiens, with many of the troops drawn from the French right wing in Alsace, and with regret also ordered the successful counterattacks of Third Army and the Army of Lorraine to be called off. Maunoury was put in command of the newly-formed Sixth Army near Paris (26 August).

Concerned at reports (which later turned out to be exaggerated) that the British had been defeated at Le Cateau and would need French protection to recover cohesion, early on 27 August Joffre gave Lanrezac a direct written order to counterattack as soon as his forces were on open ground where they could use their artillery (which Lanrezac had told him was the key factor). After Lanrezac spent the day arguing against the order, Joffre visited him at 8.30am on 28 August, and ordered him to attack to the west. After a “heated” discussion, Joffre had his aide Major Gamelin draw up a written order and signed it in Lanzerac’s presence.

De Langle de Cary’s Fourth Army, originally intended to be the spearhead of the attack into the Ardennes, was a strong force and had made several counterattacks, but Joffre now ordered it to cease counterattacking and to send a detachment under Foch to cover the gap between Fourth and Fifth Armies – this became the new Ninth Army.

Joffre turned up at Lanrezac’s headquarters to supervise his conduct of the Battle of Guise (29 August) – willing if necessary to sack him there and then. In the event he was impressed by Lanrezac’s cool demeanour and handling of the battle. As a result of the battle, von Kluck’s German First Army broke off its attacks on Maunoury’s Sixth French Army and swung south-east, inside of Paris.

On 30 August Joffre recommended that the French government evacuate Paris, and learned of the Russian disaster at Tannenberg, although he was aware that two German corps were still headed east as reinforcements for East Prussia. On 1 September Fifth Army retreated across the Aisne in some confusion, and Joffre issued his Instruction Generale No 4, placing Maunoury’s Sixth Army under the command of Gallieni (Military Governor of Paris) and forming a new cavalry corps under Conneau to fill the gap between Fifth Army and the BEF. At this stage his mind was still leaning towards Berthelot’s old suggestion that Fifth Army attack westwards against the inside of the German right wing.

Joffre sacked Lanrezac on the afternoon of 3 September, replacing him with the more aggressive Franchet d’Esperey. Joffre helped to retrieve the situation through retreat and counterattack at the First Battle of the Marne.

His major positive contributions were 1) his sustained calm under pressure and the calculated reasoning of an alumnus from École Polytechnique 2) his ruthless dismissal of unsuccessful generals during the summer of 1914 (three army commanders, ten corps commanders and thirty-eight divisional commanders, replacing them with combative men like Foch, Franchet d'Esperey and - more junior at that stage - Petain and Nivelle) and 3) his outstanding logistical handling of French infantry divisional movements and artillery ammunition supplies during and after the French retreat of August 1914.

Joffre was a man of impenetrable calm, and taciturn – he would sometimes turn up at a unit’s headquarters, listen to reports, and then depart having said hardly a word, to the consternation of the officers whom he had just inspected. He was heavily dependent on his chief of staff General Berthelot. Sir John French thought highly of him.

Joffre fought further major offensives in Artois and Champagne in 1915.

Joffre told Wilson (23 March) that “by the end of Apr(il) he would be in a condition to attack & break (underline) the line”. On 4 May “he talked of getting to Namur & the war being over in 3 (months)”.

The British Government accepted the need to maintain the Salonika bridgehead to keep the French happy, despite being sceptical about the idea that it would bring Greece into the war on the Allied side, but British military opinion did not favour any more commitment than necessary. Argument continued with Joffre throughout the year.

After months of discussion Haig and Joffre finally (14 February 1916) agreed to an Anglo-French offensive on the Somme, although the British were not pleased at Joffre’s suggestion that the British engage in “wearing out” attacks prior to the main offensive. Verdun began on 21 February, reducing the planned French commitment to the Somme.

Following the enormous French losses of 1915, and after further losses at Verdun in 1916, where the Germans initially made good progress against fortifications which had had their guns removed for use elsewhere, Joffre's political position weakened. Early in 1916 he asked the British commander-in-chief, General Sir Douglas Haig, to put in a good word with the British Ambassador in Paris (Lord Bertie) so that it would get back to the French government. General Haig wanted to delay the Anglo-French offensive at the Somme until 15 August to allow for more training and more artillery to be available. When told of this Joffre shouted at Haig that “the French Army would cease to exist” and had to be calmed down with “liberal doses of 1840 brandy”. The British refused to agree to French demands for a joint Anglo-French offensive from the Salonika bridgehead. Eventually – perhaps influenced by reports of French troop disturbances at Verdun – Haig agreed to attack at the start of July. This was just in time, as it later turned out that Petain (commander at Verdun) was warning the French government that the “game was up” unless the British attacked.

Joffre had been successfully lobbied by Robertson and at the second Chantilly Conference (15–16 November 1916) they agreed to concentrate on the Western Front in 1917 rather than sending greater resources to Salonika.

Joffre was replaced by General Robert Nivelle on 13 December 1916.

Still popular, Joffre was made Marshal of France on 26 December 1916, the first man to receive that rank under the Third Republic, but his role was little more than ceremonial.

Following the catastrophic defeats of France's ally Romania at the hands of Central Powers in late 1916, that forced the capital Bucharest to be evacuated, Joffre was appointed as head of the French Military Mission aimed at reforming the Romanian army. He spent the first part of 1917 there. In June 1917, he was appointed head of the French military mission to the USA, then leader of the Supreme War Council in 1918.

In 1918, Mount Joffre on the Continental Divide in Western Canada was named after him. Summits with the names of other French generals are nearby: Cordonnier, Foch, Nivelle, Mangin, and Pétain.

Joffre retired in 1919 and was made a member of the Académie française. Joffre was also a survivor of the 1918 flu pandemic during this time.

In 1920 Joffre presided over the Jocs Florals in Barcelona, a Catalan literary certamen. He died on 3 January 1931 in Paris and was buried on his estate in Louveciennes. His memoirs, in two volumes, were published posthumously in 1932.