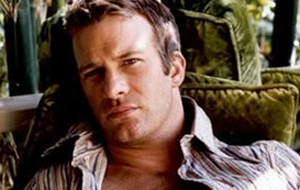 Jane was born in Baltimore, Maryland, the son of Cynthia, an antiques dealer, and Michael Elliott, a biogenetic engineer. In 1987, he graduated from Thomas Sprigg Wootton High School in Montgomery County, Maryland.
Career

Jane began his acting career with the Telugu film Padamati Sandhya Ragam (1986), directed by Jandhyala, a renowned filmmaker in Telugu Cinema. His early roles included Zeph in Buffy the Vampire Slayer (1992). He had supporting roles in several high profile films, including The Crow: City of Angels (1996), Boogie Nights (1997), The Thin Red Line (1998), Thursday (1998) and Magnolia (1999). After receiving critical acclaim as baseball player Mickey Mantle in 61*, Jane began receiving leading roles such as that of Andre Stander in the 2003 South African film, Stander for which he gained further critical acclaim.

Jane, director Jonathan Hensleigh and Avi Arad have said in many interviews that Jane was the first and only actor to be asked to play the title role in the 2004 movie The Punisher. Jane initially turned down the role twice, as he did not have much interest in the superhero genre. Jane said that when they asked him the second time to play the Punisher it was Tim Bradstreet's artwork of the Punisher that piqued his interest. After finding out that the character was not a traditional superhero, but more of an anti-hero and a vigilante crime fighter, he accepted. He read as many Punisher comics as he could find and quickly became a fan. Jane trained for 6 or 7 months with Navy SEALs and gained more than twenty pounds of muscle for the part.

In addition to starring in the movie he contributed his voice to The Punisher and the Gun video games. He also co-owns RAW, an entertainment company he runs along with Steve Niles and Tim Bradstreet. RAW Studios, the company's comic book division, has released Bad Planet (written by Jane) through Image Comics. Jane would become a spokesperson for Steve Niles and in became the cover model for comic book character Cal McDonald in 2006, as depicted by their partner Bradstreet.

In addition to his screen work, Jane has appeared several times on stage, and received strong critical reviews as Tom in Tennessee Williams' The Glass Menagerie, and as Chris in Arthur Miller's All My Sons. He has also portrayed a fictionalized version himself in the Fox television show Arrested Development in which the show's characters have not heard of him, and do not recognize him as the star actor that he is. In 2005, Marvel released The Punisher video game. The video game's storyline is compiled with different situations and enemies from the Punisher comics, and a character based upon Jigsaw also appeared in the 2005 Punisher video game but with an origin that ties directly into the 2004 Punisher film.

Jane did not return in the planned sequel to The Punisher. Lions Gate Entertainment had approved a direct sequel to be made due to the strong performance the film had on DVD. However, the project lingered in development for over 3 years. Jonathan Hensleigh completed a first draft of the script before pulling out around 2006. John Dahl was in talks to direct the film, but pulled out, saying he did not like the script, and that the studio was not willing to spend enough money on the project. In a statement on May 15, 2007 and in two audio interviews, Thomas Jane said that he pulled out of the project because of creative differences, and the budget of the film being cut.
“ What I won't do is spend months of my life sweating over a movie that I just don't believe in. I've always loved the Marvel guys, and wish them well. Meanwhile, I'll continue to search for a film that one day might stand with all those films that the fans have asked me to watch." ”

Jane said in June 2007 that movie director Zack Snyder had expressed interest in casting him for the role of 'The Comedian' for the adaptation of Alan Moore's graphic novel Watchmen, but he turned down the role because he was too busy.

In 2007, Jane's directing debut was the film Dark Country in which he also played the main character.

It was reported on February 8, 2008 that Thomas Jane had joined movie director John McTiernan in the action/thriller movie Run. Although Thomas Jane has yet to say that he has signed on to the film and due to McTiernan's civil suit the film has been put on hold. On May 27, 2008 it was reported that Thomas Jane and actor Ving Rhames had joined the cast in the action film Give ‘em Hell, Malone with writer Mark Hosack and director Russell Mulcahy. Filming took place on October 6, 2008.

On December 18, 2008, HBO announced it was picking up the dark comedy Hung, and Jane was contracted to star in the show. He plays the character of Ray Drecker, a high school history teacher and baseball coach, who, after attending a self help class while being down on his luck, decides to market the large size of his penis as a path to success. The series was renewed for a second season which airs in the summer of 2010.

It is unknown when, but Thomas Jane will develop a mini series for the Syfy (Sci Fi Channel) called Voyage to Savage Planet. He is also planning on doing a World War II action horror film called The Devil's Commandos.

Jane appeared on the June/July 2010 cover of Men's Fitness magazine.

Thomas Jane voiced the character Jonah Hex in an animated short as a companion piece on the Special Edition Blu-Ray and 2-Disc Special Edition DVD release of Batman: Under the Red Hood.
Personal life

Jane spent time in his early Hollywood days as a busker. He commented on this in a Newsweek article published May 31, 2004 (p. 21):

"I had two songs in my repertoire that I hammered to death — "Hey Joe" and "Knockin' on Heaven's Door"," he recalled. "People used to pelt me with change just to shut me up."

Jane is divorced from actress Aysha Hauer, the daughter of actor Rutger Hauer. He and Aysha starred in a number of movies together, including a short, "Picture This" by director Sean Ramsay, who was a UCLA student at the time. He was engaged to Olivia d'Abo from 1998 to 2001.

On 17 March 2008, Thomas Jane was pulled over by the California Highway Patrol for driving at "an extremely high rate of speed" on I-5. Jane was arrested for DUI with a blood alcohol level higher than .08% in Kern County, California. Jane failed several field sobriety tests, including a breathalyzer. Police also said he was driving with a suspended license.

After meeting through mutual friends in 2001, Jane and actress Patricia Arquette became engaged in 2002. Their daughter Harlow Olivia Calliope was born on February 20, 2003. Jane and Arquette subsequently married on June 25, 2006 at the Palazzo Contarini in Venice, Italy. In January 2009, Arquette filed for divorce from Jane on the grounds of irreconcilable differences, but the couple soon reconciled and Arquette requested to abandon the divorce petition on July 9, 2009. However, on August 13, 2010, Jane's representative announced that Jane and Arquette had decided to proceed with a divorce.