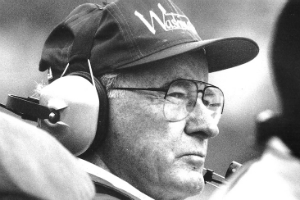 Don James (born December 31, 1932) is a former American football player and coach. He served as the head coach at Kent State University from 1971 to 1974 and at the University of Washington from 1975 to 1992, compiling a career college football record of 178–76–3. His 1991 Washington team won a share of the national championship after completing a 12–0 season with a win over Michigan in the Rose Bowl. James was inducted into the College Football Hall of Fame as a coach in 1997.

Born and raised in Massillon, Ohio, James graduated from Massillon High School in 1950. As a quarterback for the Miami Hurricanes, James set five school passing records. He then received a master's degree in education from the University of Kansas, where he was a graduate assistant for the Jayhawks. James coached high school football at Southwest Miami High School in 1959, then was a college assistant coach for 12 seasons at Florida State, Michigan, and Colorado.

In 1971, James became the head coach at Kent State in Ohio, where he compiled a 25–19–1 record (.567) in four years. There he coached future NFL great Jack Lambert and current college head coaches Nick Saban of Alabama and Gary Pinkel of Missouri. During his tenure at Kent, the Golden Flashes won their only Mid-American Conference title, in 1972, and played in their first bowl game, the 1972 Tangerine Bowl.

In December 1974, Don James was hired by University of Washington athletic director Joseph Kearney to succeed Jim Owens as head coach. James served in this capacity for 18 seasons, from 1975 to 1992. He led the Huskies to a national championship in 1991, shared with Miami. James' teams won four Rose Bowls, the Orange Bowl in January 1985, and compiled a record of 10–5 in all bowl games. Overall, James tallied a 153–57–2 mark for a winning percentage of .726 at Washington, including a then-record 98 wins in Pacific-10 Conference play. Washington won 22 consecutive games from 1990 to 1992.

During the 1992 season, it was revealed that several Huskies players had received improper benefits. Among them, starting-quarterback Billy Joe Hobert had received a series of loans totaling $50,000 made by a friend's father-in-law. While this was not an institutional violation (Hobert was deemed ineligible as a result, but the program was not punished), this was the first of a series of investigative reports by the Seattle Times and Los Angeles Times that eventually led to the Pacific-10 Conference and NCAA investigations. These led to charges that Washington exhibited "lack of institutional control" over its handling of recruiting funds for on-campus visits, in which player hosts allegedly kept money or gave it to recruits, and turned in false expense forms (amounts cited in the report were $80). The school was also charged that a booster ran a summer jobs program that employed more than 50 Husky athletes since the 1970s that either paid for work that was not performed or were not given enough work to merit their salary. The Huskies received sanctions from both the NCAA and Pacific-10 Conference, though notably James and the coaching staff were not specifically cited as having broken any rules. James resigned from his head coaching position on August 22, 1993 in protest of what he considered unfair sanctions against his team. James later clarified that he was protesting what he felt was a betrayal by then University President William Gerberding who, against the wishes of James, argued in favor of altering the penalties against the program from a 2-year TV ban and 1-year bowl ban, to a 1-year TV ban and 2-year bowl ban.