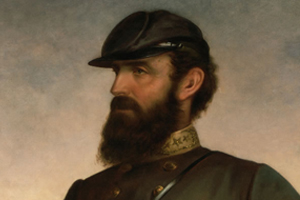 American military man, whose behavior during the first battle at Bull Run in 1861 earned him the nickname "Stonewall" when General Barnard Bee proclaimed, "There is Jackson standing like a stone wall."

A graduate of the U.S. Military Academy at West Point, he led Confederate troops in the highly successful Shenandoah Valley campaign in 1862. Following this renowned battle, his resourcefulness and bravery led to his promotion to Lieutenant General. During his last, and perhaps greatest battle, on 5/02/1863 at Chancellorsville, VA, this legendary military leader was mistakenly shot by his own troops c. 8:30 PM. Within a week he had succumbed to his wounds, dying of pneumonia on 05/10/1863, around 5:15 PM, Guinea Station, Caroline County, Virginia.

Very little is known about his early years. Jackson was born in what is now known as West Virginia, in the town of Clarksburg, VA. His father and mother both died when he was young, and Jackson grew up living with relatives. His early life gave him little opportunity for formal education, but in 1842 he was appointed to West Point where he received his college education. He graduated 17th in his class and subsequently received his commission as Second Lieutenant with assignment to the artillery division.

First sent to the Mexican War, it was there that he met General Robert E. Lee, later the famous commander of the Confederate forces. The fighting ended, Jackson was promoted to First Lieutenant and to the brevet rank of Major and ultimately was assigned to the occupation forces in Mexico City.

Peacetime, however, held no appeal for Jackson, and he found serving in the occupation forces to be monotonous. Resigning his commission in 1851, he began teaching artillery tactics and natural philosophy at the Virginia Military Institute. Stern and somewhat shy by nature, he was never popular or successful at teaching, and his moral righteousness and extreme sense of duty earned Jackson, a Presbyterian, the derisive title, "Deacon Jackson."

The start of the Civil War brought an opportunity to get back into battle, and Jackson took it, offering his services to the state of Virginia. He received his commission as a Colonel in the state forces of Virginia and soon thereafter was charged with organizing volunteers into an effective army brigade. His skill at this task earned him both fame and promotion. First assigned to a small command at Harpers Ferry, VA, where the Shenandoah River joins the Potomac, his mission was to fortify that area, and to hold it if at all possible. In July 1861 Jackson’s brigade joined others on the field of Bull Run, near Manassas, VA; it was there that he stationed his brigade in a strong, unbreakable line, holding back the enemy despite overwhelming odds, and earning the sobriquet, "Stonewall."

Although Jackson had eventually withdrawn to a more defensible position during his first sojourn in the Shenandoah Valley, it wasn’t long before he was back in the Valley again, fighting a battle often described as a "masterpiece." The spring of 1862 found Jackson defeating several Federal units in the Valley and eventually driving General Nathaniel P. Banks out of Winchester, VA and back to the Potomac River. His strategy wrecked the plans of Union General George B. McClellan, and by this time Jackson’s reputation was growing to mythical proportions. Next turning his attention elsewhere in the Valley, he defeated the Federal troops at Cross Keys on June 8, and the following day he defeated the troops at Port Republic.

The Second Battle of Bull Run found Lee and Jackson working together in an attempt to beat back Federal forces under the command of General John Pope. Lee sent Jackson to attack the rear of Pope’s forces, and ultimately Pope was soundly beaten. Lee then crossed the Potomac in an effort to "liberate" Maryland, while Jackson was sent to capture Harpers Ferry, which he did on September 13-15, following which he rejoined Lee at Antietam, VA. General Lee now divided his army into two corps, assigning Jackson, by now a Lieutenant General, to one, while putting the other in the command of General James Longstreet. In December 1862, Jackson was in command of the Confederate right during the attack of Federal General Ambrose E. Burnside who was easily defeated.

In April 1863, the seemingly unconquerable team of Lee and Jackson made perhaps its boldest move of the war. They faced General Joseph Hooker, Burnside’s successor, as he attempted to take the Confederate position on the Rappahannock River, just south of Washington, D.C. Lee moved the main body of his troops, including Jackson’s corps, into the woods near Chancellorsville, VA. Dividing his army, and keeping only 10,000 men to meet the front lines of Hooker’s attack, Lee secretly sent Jackson and his entire corps around to Hooker’s right.

Lee’s plan was completely successful, and on the evening of 5/02/1863, Jackson took the unsuspecting Federal forces by complete surprise. The moment of victory, however, was bittersweet for the Confederacy, as Jackson, who had gone forward to organize a pursuit of the fleeing Federal troops, was accidentally shot by his own men as he returned at nightfall. Seriously, but not mortally wounded, his left arm was amputated. Although hopes were high for his recovery, within a week pneumonia set in, and Jackson died. The man famous for his resourcefulness and immense bravery in the face of enemy fire, as well as for the ability to keep his head during battle, was irreplaceable. The qualities of Lee and Jackson complimented each other well, and the cooperation between the two was legendary. While the battle ended with the loss of Jackson’s left arm, General Robert E. Lee had, in fact, lost his "right arm."

A man who combined a deep religious fervor with a fiercely aggressive fighting spirit, Jackson was a stern disciplinarian. His men trusted him and had confidence in his leadership. He was a master of surprise tactics and was able to keep his intentions so veiled in secrecy that often his own officers were unaware of his plans until they were ordered into battle.

Jackson married twice during his lifetime, first to Eleanor Junkin, who later died. He remarried Mary Anna Morrison. Eccentric throughout his life, Jackson was known for quirks such as standing while eating. He believed that one side of his body weighed more than the other side, and as a result he walked with one arm raised to restore his balance.

In Jackson’s memory, the plantation office building where he died was made into the "Stonewall" Jackson Shrine. It was one of several outbuildings on Thomas C. Chandler’s plantation, "Fairfield," and the location was chosen specifically by General Lee as a safe place for Jackson to recuperate. Dead at age 39, Jackson’s last words were reported to be, "Let us cross over the river and rest in the shade of the trees."