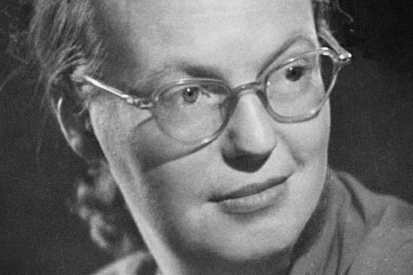 Shirley Hardie Jackson (December 14, 1916 – August 8, 1965) was an American author. A popular writer in her time, her work has received increasing attention from literary critics in recent years. She has influenced such writers as Neil Gaiman, Stephen King, Nigel Kneale and Richard Matheson.

She is best known for the short story "The Lottery" (1948), which suggests a secret, sinister underside to bucolic small-town America. In her critical biography of Jackson, Lenemaja Friedman notes that when "The Lottery" was published in the June 26, 1948, issue of The New Yorker, it received a response that "no New Yorker story had ever received". Hundreds of letters poured in that were characterized by, as Jackson put it, "bewilderment, speculation and old-fashioned abuse".

In the July 22, 1948, issue of the San Francisco Chronicle Jackson offered the following in response to persistent queries from her readers about her intentions:

Explaining just what I had hoped the story to say is very difficult. I suppose, I hoped, by setting a particularly brutal ancient rite in the present and in my own village to shock the story's readers with a graphic dramatization of the pointless violence and general inhumanity in their own lives.

Jackson's husband, the literary critic Stanley Edgar Hyman, wrote in his preface to a posthumous anthology of her work that "she consistently refused to be interviewed, to explain or promote her work in any fashion, or to take public stands and be the pundit of the Sunday supplements. She believed that her books would speak for her clearly enough over the years." Hyman insisted the darker aspects of Jackson's works were not, as some critics claimed, the product of "personal, even neurotic, fantasies", but that Jackson intended, as "a sensitive and faithful anatomy of our times, fitting symbols for our distressing world of the concentration camp and the Bomb", to mirror humanity's Cold War-era fears. Jackson may even have taken pleasure in the subversive impact of her work, as evidenced by Hyman's statement that she "was always proud that the Union of South Africa banned 'The Lottery,' and she felt that they at least understood the story".

She is also well known for the 1959 novel The Haunting of Hill House, which was adapted in the 1963 Robert Wise film The Haunting.

Although Jackson claimed to have been born in 1919 in order to appear younger than her husband, birth records state that she was born in 1916. Born Shirley Hardie Jackson in San Francisco, California, to Leslie and Geraldine Jackson, Shirley and her family lived in the community of Burlingame, California, an affluent middle-class suburb that would feature in Shirley's first novel The Road Through the Wall (1948). The Jackson family relocated to Rochester, New York, where Shirley attended Brighton High School and graduated in 1934. For college, she first attended the University of Rochester, before graduating with a BA from Syracuse University in 1940.

While a student at Syracuse, Shirley became involved with the campus literary magazine, through which she met her future husband Stanley Edgar Hyman, who would become a noted literary critic. For Stanley J. Kunitz and Howard Harcraft's Twentieth Century Authors (1954), she wrote:

I very much dislike writing about myself or my work, and when pressed for autobiographical material can only give a bare chronological outline which contains, naturally, no pertinent facts. I was born in San Francisco in 1919 and spent most of my early life in California. I was married in 1940 to Stanley Edgar Hyman, critic and numismatist, and we live in Vermont, in a quiet rural community with fine scenery and comfortably far away from city life. Our major exports are books and children, both of which we produce in abundance. The children are Laurence, Joanne, Sarah and Barry: my books include three novels, The Road Through the Wall, Hangsaman, The Bird's Nest and a collection of short stories, The Lottery. Life Among the Savages is a disrespectful memoir of my children.

After their marriage and brief sojourns in New York City and Westport, Connecticut, the Hymans settled in North Bennington, Vermont, where Hyman became a professor at Bennington College as Shirley continued to publish novels and short stories. Her novel Hangsaman (1951) and her short story "The Missing Girl" (from Just an Ordinary Day, the 1995 collection of previously unpublished and/or uncollected short stories) both contain certain elements similar to the mysterious real-life December 1, 1946, disappearance of 18-year-old Bennington College sophomore Paula Jean Welden of Stamford, Connecticut. This event, which remains unsolved to this day, took place in the wooded wilderness of the Glastenbury Mountain near Bennington in southern Vermont, where Jackson and her family were living at the time. The fictional college depicted in Hangsaman is based in part on Jackson's experiences at Bennington College, as indicated by Jackson's papers in the Library of Congress.

The Hymans were known for being colorful, generous hosts who surrounded themselves with literary talents, including Ralph Ellison. Both Shirley and Stanley were enthusiastic readers whose personal library was estimated at over 100,000 books. The Hymans had four children, Laurence (Laurie), Joanne (Jannie), Sarah (Sally), and Barry, who would come to their own brand of literary fame as fictionalized versions of themselves in their mother's short stories.

In addition to her adult literary novels, Jackson also wrote a children's novel, Nine Magic Wishes, available in an edition illustrated by her grandson, Miles Hyman, as well as a children's play based on Hansel and Gretel and entitled The Bad Children. In a series of short stories, later collected in the books Life Among the Savages and Raising Demons, she presented a fictionalized version of her marriage and the experience of bringing up four children. These stories pioneered the "true-to-life funny-housewife stories" of the type later popularized by such writers as Jean Kerr and Erma Bombeck during the 1950s and 1960s.

In 1965, Jackson died of heart failure in her sleep, at her home in North Bennington, at the age of 48. At the time of her death, she was overweight and a heavy smoker who had suffered throughout her life from various neuroses and psychosomatic illnesses. These ailments, along with the various prescription drugs used to treat them, may have contributed to her declining health and early death. After her death, her husband released a posthumous volume of her work, Come Along With Me, containing several chapters of her unfinished last novel as well as several rare short stories (among them "Louisa, Please Come Home") and three speeches given by Jackson in her writing seminars.

In addition to the aforementioned Hangsaman, her other novels include The Bird's Nest (1954) and The Sundial (1958). The Haunting of Hill House (1959) is regarded by many, including Stephen King, as one of the important horror novels of the 20th century. This contemporary updating of the classic ghost story has a vivid and powerful opening paragraph:

No live organism can continue for long to exist sanely under conditions of absolute reality; even larks and katydids are supposed, by some, to dream. Hill House, not sane, stood by itself against its hills, holding darkness within; it had stood so for eighty years and might stand for eighty more. Within, walls continued upright, bricks met neatly, floors were firm, and doors were sensibly shut; silence lay steadily against the wood and stone of Hill House, and whatever walked there, walked alone.

In addition to radio, TV and theater adaptations, "The Lottery" has been filmed three times, most notably in 1969 as an acclaimed short film which director Larry Yust made for an Encyclopædia Britannica educational film series. The Academic Film Archive cited Yust's short "as one of the two bestselling educational films ever".

Eleanor Parker starred in Hugo Haas' Lizzie (1957), based on The Bird's Nest, with a cast that included Richard Boone, Joan Blondell, Marion Ross and Johnny Mathis.

Jackson's 1962 novel We Have Always Lived in the Castle was adapted for the stage by Hugh Wheeler in the mid-1960s. Directed by Garson Kanin and starring Shirley Knight, it opened on Broadway October 19, 1966. The David Merrick production closed after only nine performances at the Ethel Barrymore Theatre, but Wheeler's play continues to be staged by regional theater companies.

Joanne Woodward directed Come Along with Me (1982), adapted from Jackson's unfinished novel, with a cast headed by Estelle Parsons and Sylvia Sidney.

In 2010, We Have Always Lived in the Castle was adapted into a musical drama by Adam Bock and Todd Almond and premiered at Yale Repertory Theatre on September 17, 2010. The production was directed by Anne Kauffman and starred Alexandra Socha, Jenn Gambatese, Bill Buell and Sean Palmer.

In 1938, while she was studying at Syracuse, her first published story, "Janice", appeared, and the stories that followed were published in Collier's, Good Housekeeping, Harper's, Mademoiselle, The New Republic, The New Yorker, Woman's Day, Woman's Home Companion and other publications.

In 1996, a crate of unpublished stories was found in the barn behind Jackson's house. The best of those stories, along with previously uncollected stories from various magazines, were published in the 1996 collection Just an Ordinary Day. The title was taken from one of her stories for The Magazine of Fantasy & Science Fiction, "One Ordinary Day, with Peanuts".

Jackson's papers are available in the Library of Congress. In its August 5, 2013, issue The New Yorker published "Paranoia", which the magazine said was discovered at the library.

According to the post-feminist critic Elaine Showalter, Jackson's work is the single most important mid-20th century body of literary output yet to be critically revalorized in the present day. In a March 4, 2009, podcast distributed by the renowned business publisher The Economist, Showalter also revealed Joyce Carol Oates has edited a collection of Jackson's work called Shirley Jackson Novels and Stories that was published in the highly-esteemed Library of America series.

The 1980s witnessed considerable scholarly interest in Jackson's work. Peter Kosenko, a Marxist critic, advanced an economic interpretation of "The Lottery" that focussed on "the inequitable stratification of the social order." Sue Veregge Lape has argued that feminist critics who did not consider Jackson to be a feminist played a significant role in her lack of earlier critical attention. In contrast, Jacob Appel has written that Jackson was an "anti-regionalist writer" whose criticism of New England proved unpalatable to the American literary establishment.

In 2007, the Shirley Jackson Awards were established with permission of Jackson's estate. They are in recognition of her legacy in writing, and are awarded for outstanding achievement in the literature of psychological suspense, horror, and the dark fantastic. The awards are presented at Readercon.