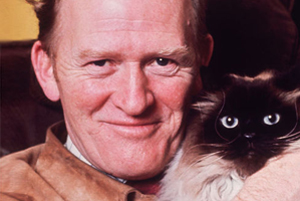 Gordon Cameron Jackson, OBE (19 December 1923 – 15 January 1990) was a Scottish Emmy Award-winning actor best remembered for his roles as the butler Angus Hudson in Upstairs, Downstairs and George Cowley, the head of CI5, in The Professionals.

Gordon Jackson was born in Glasgow in 1923, the youngest of five children. He attended Hillhead High School, and in his youth he took part in BBC radio shows including Children's Hour. He left school aged 15 and became a draughtsman for Rolls-Royce. His film career started in 1942, when producers from Ealing Studios were looking for a young Scot to act in The Foreman Went to France and he was suggested for the part. After this, he returned to his job at Rolls-Royce, but he was soon asked to do more films, and he made the decision to make acting his career. Jackson soon appeared in other Ealing films, including San Demetrio London, The Captive Heart, Eureka Stockade and Whisky Galore!. In the early years of his career, Jackson also worked in rep in Glasgow, Worthing and Perth.

In 1949, he starred in the film Floodtide, along with actress Rona Anderson. He and Anderson married two years later on 2 June 1951. They had two sons, Graham and Roddy. The same year, he made his London stage debut, appearing in Seagulls Over Sorrento. In the 1950s and 1960s he appeared on television in programmes such as The Quatermass Xperiment, The Adventures of Robin Hood, ABC of Britain, The Navy Lark, Gideon's Way and The Avengers. Jackson also starred in the films The Great Escape, The Bridal Path and The Ipcress File. In 1969, he starred with his wife in The Prime of Miss Jean Brodie. That year, he played Horatio in Tony Richardson's production of Hamlet and he won a Clarence Derwent Award for Best Supporting Actor, having also taken part in the film version.

Gordon Jackson became a household name playing the stern Scottish butler Hudson in sixty episodes of the period drama Upstairs, Downstairs from 1971 to 1975. In 1976, he won an Emmy Award for Outstanding Single Performance by a Supporting Actor for the episode "The Beastly Hun". In 1974, he was named British Actor of the Year and in 1979 he was made an OBE. In 1972, Jackson was cast opposite Bette Davis in the American television movie Madame Sin, which was released in foreign markets as a feature film.

His next big television role came in 1977 with The Professionals. He played George Cowley in all 57 episodes until the programme's end in 1983, although filming had finished in 1981. In 1981, he had played Noel Strachan in the Australian World War II drama A Town Like Alice, winning a Logie Award for this performance.

After A Town Like Alice and The Professionals, Gordon Jackson continued his television work with appearances in Hart to Hart, Campion and Shaka Zulu, and the films The Shooting Party and The Whistle Blower. He also appeared in the theatre, appearing in Cards on the Table, adapted from the novel by Agatha Christie at the Vaudeville Theatre in 1981, and in Mass Appeal by Bill C. Davis at the Lyric Hammersmith in 1982. From 1985 to 1986, Jackson narrated two afternoon cookery shows in New Zealand called Fresh and Fancy Fare and its successor Country Fare. His last role before his death was in Effie's Burning, and this was broadcast after his death.

In 1989, he was diagnosed with bone cancer. He died the following year, aged 66, in London and was cremated at Golders Green Crematorium.