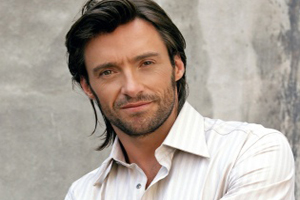 Hugh Michael Jackman (born 12 October 1968) is an Australian film producer, and film and stage actor, known for playing Wolverine in X-Men and its sequels, and for his Tony Award-winning performance in The Boy from Oz.

Early life
Jackman was born in Pymble, Sydney, New South Wales, Australia, the youngest of five children of English-born parents Chris Jackman and Grace Watson. His mother left the family and went back to England when he was eight years old, and he remained behind with his father (an accountant with a degree from Cambridge), and his siblings.

Jackman attended Pymble Public School and Knox Grammar School, an all-boys school, where he starred in the musical My Fair Lady in 1985, directed by the headmaster, Dr Ian Paterson. Jackman was School Captain in 1986. The following year he spent a gap year working at Uppingham School in England. Upon his return to Australia he pumped petrol at Shell, Wahroonga and worked as a part-time clown for children's parties while studying at the University of Technology, Sydney. In 1989 Jackman participated in a Christian workcamp on Hasst's Bluff and Areyonga Aboriginal land in the Western Desert in Central Australia. Jackman then graduated with a BA in Communications, having majored in journalism. He later used some money inherited from a relative to attend the WAAPA of Edith Cowan University in Perth, from which he graduated in 1994.

Jackman's early film work includes Erskineville Kings and Paperback Hero (1999), while his television work includes Law of the Land, Halifax f.p., Blue Heelers, and Snowy River: The McGregor Saga (in which he appeared in the recurring guest starring role of Duncan Jones).

On stage, Jackman played Gaston in the Melbourne production of Beauty and the Beast, and Joe Gillis in the same city's production of Sunset Boulevard. During his stage musical career in Melbourne, he starred in the 1998 Midsumma festival cabaret production Summa Cabaret. He also hosted both Melbourne's Carols by Candlelight and Sydney's Carols in the Domain.

He first became known outside of Australia when he played the leading role of Curly in the Royal National Theatre's acclaimed stage production of Oklahoma! in the West End of London in England. His performance was filmed for television broadcast and DVD release. On 6 June 2002, Jackman sang the role of Billy Bigelow in Carousel in a special concert performance at Carnegie Hall in Manhattan, New York City.

He was a last-minute addition to the X-Men cast. Dougray Scott was originally cast as Wolverine, but Scott was tied up on the set of Mission: Impossible II for two additional months of shooting. According to a CBS interview in November 2006, even his wife Deborra-Lee Furness told him not to take the role, a comment she later told him she was glad he ignored. Jackman, at 6' 2 1/2" tall, stands nearly a foot taller than Wolverine, who is said in the original comic book to be 5' 3". Hence, the filmmakers were frequently forced to shoot Jackman at unusual angles or only from the waist up to make him appear shorter than he actually was. In an interview with Men's Health magazine, he stated that he was also required to add a great deal of muscle for the role, and noted that at the end of his preparatory physical training, he could bench press 315 lbs. and leg press 1000 lbs. An instant star upon the film's release, Jackman later reprised the role of Wolverine in in 2003's X2: X-Men United, and 2006's X-Men: The Last Stand. The trilogy ultimately garnered over a billion dollars worldwide. He is producing a Wolverine spin-off, to be released sometime in 2008.

In 2004, Jackman won a Tony Award for his Broadway portrayal of Australian songwriter and performer Peter Allen in The Boy from Oz. He hosted the Tony Awards in 2003, 2004 and 2005, garnering very positive reviews. The televising of the these awards earned him an Emmy Award win for Outstanding Individual Performer in a Variety, Musical or Comedy program in 2005. In 2004 and 2005, it was rumoured that he was being considered for the next James Bond, succeeding Pierce Brosnan. However, the role went to Daniel Craig.

In 2006, he was cast to replace Russell Crowe in Baz Luhrmann's Australia, starring opposite Nicole Kidman. The film is currently (June 2007) in production in Queensland, Australia, at the north-east coastal town of Bowen.

Jackman is also preparing a number of movies which he will both produce and star in, including Wolverine, estimated to begin filming around Summer 2007 and a remake of Carousel.

Personal life
Jackman married actress Deborra-Lee Furness in April 1996. They met on the set of his first TV acting job in Correlli, an Australian television program. Jackman played an angry prisoner who fell in love with his counsellor, played by Furness. The couple suffered through two miscarriages, after which they adopted two children, son Oscar Maximillian (b. May 15, 2000) and daughter Ava Eliot (b. July 10, 2005). They currently live in Melbourne. Jackman personally designed an engagement ring for Furness, and their wedding rings bore the Sanskrit inscription "Om paramar mainamar," translated by Furness as "we dedicate our union to a greater source".

In 2005, Jackman joined with longtime assistant John Palermo to form a production company, Seed Productions, whose first project will be Wolverine in 2008. Furness is also involved in the company, and Palermo had three rings made with an inscription meaning "unity" for himself, Furness, and Jackman. About the trio's collaboration Jackman reports "I'm very lucky in the partners I work with in my life, Deb and John Palermo. It really works. We all have different strengths. I love it. It's very exciting".

Jackman knows how to juggle 5 balls in the air at the same time. He does not smoke in real life, and hates having to do so in films. In real life he is described as a very polite and friendly man, unlike the belligerent, anti-social Wolverine. He sang the Australian National Anthem in front of 100,000 people at the Melbourne Cricket Ground before the 1998 Bledisloe Cup. He also sang the National Anthem at the 1999 NRL Grand Final in front of 108,000 people at Stadium Australia.

On April 1, 2007, Jackman was awarded an honorary fellowship at WAAPA of Edith Cowan University in Perth.

Jackman is a known supporter of the West Coast Eagles in the Australian Football League. He also reportedly supports English soccer team Norwich City FC due to his mother hailing from Norfolk, UK.