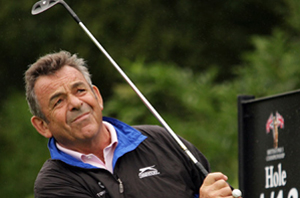 Jacklin was born in the North Lincolnshire town of Scunthorpe in 1944, the son of a truck driver. He attended Henderson Avenue Primary School in the town. He turned professional in 1962.

In 1969, Jacklin became the first British player to win The Open Championship for 18 years, winning by two strokes at Royal Lytham & St Annes. The following season he won his second major title, the U.S. Open by seven strokes on a windblown Hazeltine National Golf Club course. It was the only U.S. Open victory by a European player in an 84-year span (1926–2009); Northern Ireland's Graeme McDowell ended that streak in 2010.

Jacklin won eight events on the European Tour between its first season in 1972 and 1982. He also won tournaments in Europe prior to the European Tour era, and in the United States, South America, South Africa and Australasia. His 1968 PGA Tour win at the Jacksonville Open Invitational was the first by a European player on the U.S. Tour since the 1920s; Jacklin was the first British player since the 1940s and Henry Cotton to devote much of his effort to American Tour events.

However, Jacklin may be best remembered for his involvement in the Ryder Cup. He was a playing member of the "Great Britain and Ireland" team in 1967, 1969, 1971, 1973, 1975 and 1977, and of the first European team in 1979. Except for a tie in 1969, all of those teams were defeated. Jacklin was involved in one of the most memorable moments in Ryder Cup history at Royal Birkdale Golf Club in 1969. After his eagle putt on 17 evened his match with Jack Nicklaus, Nicklaus conceded Jacklin's two-foot putt on 18, halving the match, and ending the Ryder Cup with a tied score. "The Concession" ended with the two golfers walking off the course with arms around each other's shoulders. Jacklin and Nicklaus later co-designed a golf course in Florida called "The Concession" to commemorate the moment.

Jacklin suffered a devastating near-miss in The Open Championship of 1972 at Muirfield. Tied for the lead with playing partner Lee Trevino playing the 71st hole, Jacklin had a straightforward 15-foot birdie putt on the par-5 hole, while Trevino was not yet on the green after four struggling strokes. But Trevino holed a difficult chip shot, and Jacklin took three putts, leaving him one shot behind. Trevino parred the final hole to win, but Jacklin bogeyed, finishing third behind Jack Nicklaus. Jacklin was just 28 years old at the time, but never seriously contended again in a major championship.

Jacklin later served as the non-playing captain of Europe in four consecutive Ryder Cups from 1983 to 1989. He had a 2.5–1.5 won-loss record, captaining his men to their first victory for 28 years in 1985, and to their first ever victory in the United States in 1987.

Jacklin was inducted into the World Golf Hall of Fame in 2002. He retired from tournament golf in 2004 at the age of sixty, having won a number of events at senior level. Jacklin has developed a golf course design business since his retirement from competition. He has designed numerous courses, including the 9-hole par 3 course of The St. Pierre Park Hotel in Guernsey.

Jacklin has been hearing impaired for over 25 years and wears a hearing aid device on both sides. He is a patron of the English Deaf Golf Association.

Jacklin has six children. The youngest of his children, Sean, is a golfer who plays in Europe on the Challenge Tour.

Jacklin's first wife, Vivien, was from Belfast, Northern Ireland. They met in the bar of a Belfast hotel and married in 1966. In 1971, Jacklin said that he received death threats from a caller who also threatened to bomb his wife's family home in Belfast. The caller said that Jacklin would be shot if he played in the Ulster Open, because his wife's family supported Ian Paisley.

Vivien Jacklin died suddenly of a brain haemorrhage in April 1988, aged 44. In an interview in 2002, Jacklin said: "You can't understand the anguish of losing a spouse until it happens to you. I lost my will to live after my first wife died. I contemplated doing something very terrible to myself. Eventually I recovered."

Six weeks after his first wife's death, Jacklin met a 16-year-old waitress named Donna Methven at a golf tournament in England. Jacklin later said: "I was at my lowest ebb and Donna was a shoulder to cry on." They had a two-month affair which led to front-page headlines in British tabloid newspapers.

Jacklin said in an interview in 1989 that he was barely on speaking terms with his mother.