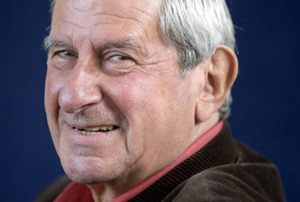 Sir Jeremy Isaacs (born 28 September 1932) is a British television producer and executive, winner of many BAFTA awards and international Emmy Awards. He was also General Director of the Royal Opera House, Covent Garden (1987-96).

Isaacs was born in Glasgow from what were described as "Scottish Jewish roots". He grew up in Hillhead, the son of a jeweller and a GP, and is a cousin to virologist Alick Isaacs. He was educated at the independent Glasgow Academy and Merton College, Oxford, where he read Classics. He did his National Service in the Highland Light Infantry.

Isaacs began his career in television when he joined Granada Television in Manchester as a producer in 1958. At Granada he was involved in creating or supervising series such as World in Action and What the Papers Say. He has worked for the BBC (on Panorama) in the 1960s and was the overall producer for the 26-episode series The World at War for Thames Television in 1973. He was Director of Programmes for Thames between 1974 and 1978. He then produced Ireland: A Television History (1981) for the BBC.

Isaacs was the founding chief executive of Channel 4 between 1981 and 1987, overseeing its launch period and setting the channel's original 'high brow' style. At that time, the channel catered more for less mainstream cultural tastes than it does now with opera and foreign language films featuring, though such populist programmes as the pop music series The Tube and soap opera Brookside had a place in the schedule from the beginning.

The channel commissioned Michael Elliott's production of King Lear (1983) with Laurence Olivier in the title role and Isaacs re-commissioned a number of programmes from his time at Granada including What the Papers Say. His appointment of David Rose, previously long with the BBC, as the Commissioning Editor for Fiction led to the Channel's involvement with the eighties revival of the British film industry via the Film on Four strand. Despite a general liberal atmosphere though, a few commissioned programmes such as Ken Loach's A Question of Leadership were withdrawn from transmission.

In 1990, Isaacs named a four-hour dramatisation of an early Percy Bysshe Shelley Gothic horror novel, Zastrozzi (1986), as one of the 10 programmes of which he was most proud during his tenure as Channel 4's chief executive.

When handing over responsibility for running the channel to Michael Grade, Isaacs threatened to throttle him if he betrayed the trust placed in him to respect the channel's remit.

After leaving Channel 4, and failing to be appointed Director General of the BBC in 1987, Isaacs became General Director of the Royal Opera House, Covent Garden, a role he fulfilled until 1996. This was a difficult period for the ROH, which was not helped by the broadcast of the revealing The House (1996) documentary series on BBC2.

Ted Turner sought out Isaacs (confusing him with the actor Jeremy Irons) for the role of executive producer for his 1998 24-episode Cold War series.

Between 1997 and 2000 Isaacs was president of the Royal Television Society. He is currently chairman of Sky Arts.

From 1990 to 1998 Isaacs acted as interviewer in a revival of the BBC series Face to Face; John Freeman had filled this role in the original 1959-62 run.