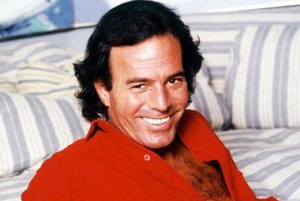 Spanish singer, known as the master of the love song, the world's top selling living pop star, Iglesias has sold a Guinness record of 100 million albums worldwide. Releasing five albums a year in five different languages, Spanish, Italian, French, Portuguese and English, it is estimated that every 30 seconds the music of Julio Iglesias is playing somewhere in the world. His first album released in the U.S., with the hit single "To All The Girls I've Loved Before," sold 3 million copies alone and placed Iglesias in the pantheon of golden-throated song-and-sex stars.

The son of a physician and a homemaker, Julio grew up in Madrid in an atmosphere of wealth and privilege. Well-mannered, athletic and eager to please, the average student spent most of his childhood and adolescence playing soccer, displaying a precocious talent which later earned him a place on the national team, playing goalie for Real Madrid. "I was one of the best young soccer players in my country," he said. "You never know at what age you can be a superstar, but it was definitely my dream. Up until the accident."

The professional athlete who took no interest in music whatsoever suffered a setback at age 20 that was to alter the course of his life. While driving recklessly around a curve, Julio's car turned over, ejecting the two other passengers. Miraculously, everyone walked away relatively unharmed, including Julio. Or so he thought.

Months later, a progressive weakening of reflexes and increased numbing rendered Julio unable to walk. Tests revealed that he had suffered a hemorrhage in the accident which caused compression in his spine. After surgery, paralysis set, resulting in the prospect of life in a wheelchair. "I felt like I had died."

Still there was light at the tend of the tunnel. His spine had been traumatized, not severed, and by all accounts he could walk again, but it required much rehabilitation and effort. Two months after the accident occurred, a nurse handed the bedridden Julio a guitar with an instruction manual. Within weeks he was writing and performing his own music. Four years later, following a grueling regimen to regain his ability to walk and a two year stint at Cambridge where he studied law and performed in local clubs, he made his first public performance at a Spanish music festival and won every award. Within two weeks, the song recorded at the festival, "La Vida Sigue Igal," became the No.1 single in Spain, launching Julio into a new career that quickly reached superstar status. "I knew success already from sports. I couldn't do sports again, yet I couldn't survive without lights."

Concert tours followed to sold-out houses worldwide including three performances at the White House. A driven perfectionist, Iglesias supervises every detail of his recordings and their releases and, despite his astonishing success, is seldom without his nose to the grindstone, composing, translating, or endlessly rehearsing to create the "perfect" show, or "perfect" album.

Iglesias' marriage to Isabel Preysler ended in annulment in 1971, which, sadly, named their three children as bastards in the eyes of the church. Enrique was the youngest of those three children; he had an older sister and older brother, Chabeli and Julio Jose, respectively. Julio and long-time companion Miranda Rijnsburger, born 5 October 1965, had a son on 9 September 1997, her first, his fourth, following up with another son and then, twin daughters on 1 May 2001. He owns five houses, but calls his three-million-dollar palace on a man-made island in North Miami home. In January 1998 he is working on another home being built in Punta Cana, Dominican Republic. He's also developing a golf resort there with designer Oscar de la Renta.

In the late '90s, his handsome son Enrique began to follow the Iglesias legend as a singing heart-throb.

The singer and his long-time girlfriend, Miranda Rijnsburger, welcomed their fifth child on 5 May 2007, a son named Guillermo, born in Miami Beach, FL.