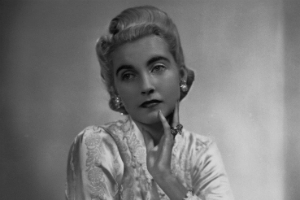 Barbara Woolworth Hutton (November 14, 1912 – May 11, 1979) was an American socialite, heiress and debutante, often dubbed "Poor Little Rich Girl" due to the fact that she was given a lavish and expensive debutante ball during the Great Depression and due to her troubled life.

Heiress to the retail tycoon Frank Winfield Woolworth, she endured a disturbed childhood that made it hard for her to form relationships. Seven times married, she acquired several grand foreign titles, but was cynically exploited by many of her husbands. Although much envied for her possessions and her life of leisure, she remained deeply insecure, often taking refuge in drink, drugs and playboys. She ended her days almost bankrupt, owing to her naivete and compulsive generosity, her state worsened further by the death of her only son in an air crash.

Born in New York City, Barbara Hutton was the only child of Edna Woolworth (1883–1917), a daughter of Frank W. Woolworth, the founder of the successful Woolworth five-and-dime stores. Barbara's father was Franklyn Laws Hutton (1877–1940), a wealthy co-founder of E. F. Hutton & Company (owned by Franklyn's brother Edward Francis Hutton), a respected New York investment banking and stock brokerage firm. She was a niece by marriage of cereal heiress Marjorie Merriweather Post, who was for a time (1920–1935) married to E.F. Hutton; thus their daughter, actress-heiress Dina Merrill (born Nedenia Hutton), was a first cousin to Barbara Hutton. Dina Merrill related on A&E's Biography of the Woolworths, that for a time Barbara lived with them following the death of her mother and abandonment by her father.

Edna Hutton reportedly died from suffocation due to mastoiditis, but rumor persists that she committed suicide by poison in despair over her husband's philandering, especially as the coroner decided that no autopsy was necessary. Five year old Barbara discovered her mother's body. After her mother's death, she lived with various relatives, and was raised by a governess. Hutton attended Miss Hewitt's Classes, now The Hewitt School in New York's Lenox Hill neighborhood and Miss Porter's School for Girls in Farmington, Connecticut. She became an introverted child who had limited interaction with other children of her own age. Her closest friend and only confidante was her cousin Jimmy Donahue, the son of her mother's sister.

In 1924, Barbara Hutton's grandmother Jennie (Creighton) Woolworth died, leaving about $28 million to Barbara in a trust fund worth $26.1 million and another $2.1 million in stock from her mother's inheritance to be administered by her father. By the time of her 21st birthday in 1933, her father had increased the amount to about $42 million (Over $2 billion in 2012), not including the additional $8 million from her mother's estate through sound investments, making her one of the wealthiest women in the world.

In accordance with New York's high society traditions, Barbara Hutton was given a lavish débutante ball in 1930 on her 18th birthday, where guests from the Astor and Rockefeller families, amongst other elites, were entertained by stars such as Rudy Vallee and Maurice Chevalier. The ball cost $60,000 ($825,000 in 2012), a veritable fortune in the days of the depression. Public criticism was so severe that she was sent on a tour of Europe to escape the onslaught of the press.

Though Barbara Hutton was portrayed in the press as the "lucky" young woman who had it all, the public had no idea of the psychological problems she lived with that led to a life of victimization and abuse. Barbara Hutton married seven times:

Her first two husbands used her great wealth to their advantage, especially the extremely abusive Count Court Haugwitz-Reventlow, with whom she had her only child, a son named Lance. Lance Reventlow became a race car driver and builder of his own well respected sports car, the Scarab, in the golden age of American sports car racing. Reventlow dominated her through verbal and physical abuse, which escalated to a savage beating that left her hospitalized and put him in jail. He also persuaded her to give up her American citizenship, and to take his native Danish citizenship for tax purposes, which she did in December 1937 in a New York federal court. At this point she lapsed into drug abuse. Hutton then developed anorexia, which would plague her for the rest of her life.

Hutton's divorce from Reventlow gave her custody of their son. As her father had done, she left the raising of her child to a governess and private boarding schools.

"How do you get a marriage to button?"

"You'll have to ask some other person."

As World War II threatened in 1939, Hutton moved to California. She was active during the war, giving money to assist the Free French Forces and donating her yacht to the Royal Navy. Using her high-profile image to sell war bonds, she received positive publicity after being derided by the press as a result of her marriage scandals. In Hollywood, she met and married Cary Grant, one of the biggest movie stars of the day. The married couple was dubbed "Cash and Cary". Grant did not need her money nor to benefit from her name, and appeared to genuinely care for her. Nevertheless, this marriage also failed. Grant did not seek or receive any money from Hutton in their divorce settlement. Hutton would go on to live with Frederick McEvoy, purchasing a chalet at a ski resort in Franconia, New Hampshire. The couple never married and remained friends until McEvoy's death in 1951.

Hutton left California and moved to Paris, France, before acquiring a palace in Tangier. Hutton then began dating Igor Troubetzkoy, an expatriate Russian prince of very limited means but world renown. In the spring of 1948 in Zurich, Switzerland, she married him. That year, he was the driver of the first Ferrari to ever compete in Grand Prix motor racing when he raced in the Monaco Grand Prix and later won the Targa Florio. He ultimately filed for divorce. Hutton's subsequent attempted suicide made headlines around the world. Labeled by the press as the "Poor Little Rich Girl", her life nevertheless made great copy and the media exploited her for consumption by a fascinated public.

Her next marriage, lasting all of 53 days (December 30, 1953 – February 20, 1954), was to Dominican diplomat Porfirio Rubirosa, a notorious international playboy who meanwhile continued his affair with actress Zsa Zsa Gabor.

Hutton then spent time with Americans James Douglas and Philip Van Rensselaer. Her lavish spending continued; already the owner of several mansions around the world, in 1959 she built a luxurious Japanese-style palace on a 30-acre (120,000 m2) estate in Cuernavaca, Mexico.

Her next husband was an old friend, German tennis star Baron Gottfried von Cramm. This marriage also ended in divorce. He died in an automobile crash near Cairo, Egypt, in 1976.

In Tangier, Hutton met her seventh husband, Prince Pierre Raymond Doan Vinh na Champassak. This marriage, too, was short-lived. Raymond Doan was an adopted member of the former royal family of the Kingdom of Champasak.

Hutton frequently appeared drunk in public and her spending continued unabated. She began spending time with younger men, and was known to make gifts to total strangers.

Over the years, apart from an important inheritance which included Old Master paintings and important sculptures, she also personally acquired a magnificent collection of her own which included the spectrum of arts, porcelain, valuable jewelry, including elaborate historic pieces that had once belonged to Marie Antoinette and Empress Eugénie of France, and important pieces by Fabergé and Cartier. Among her pieces of jewelry was the 40-carat (8.0 g) Pasha Diamond, which she purchased as an unusual octagonal brilliant-cut but had recut into a round brilliant, bringing it down to 36 carats (7.2 g).

The death of her only son Lance Reventlow in an air crash in 1972 sent Hutton into a state of despair. By this time, her fortune had diminished, due to her extreme generosity (she had donated Winfield House to the United States government as a residence for their UK ambassador.) but also allegedly through questionable deals by her long-time lawyer, Graham Mattison. Eventually she began liquidating assets in order to raise funds to live, yet continued to spend money on strangers willing to pay a little attention to her. She spent her final years in Los Angeles, living at the Beverly Wilshire Hotel, where she died from a heart attack in May 1979, aged 66. One biographer claimed that at her death, $3,500 was all that remained of her fortune, but some who actually knew her said that was not the case. She was interred in the Woolworth family mausoleum at Woodlawn Cemetery in the Bronx, New York.