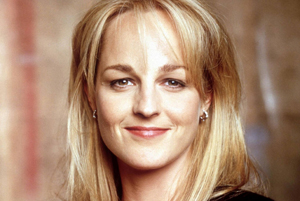 Helen Elizabeth Hunt (born June 15, 1963) is an Emmy, Golden Globe and Academy Award-winning American actress, perhaps most widely known for her role in the television sitcom Mad About You.

Hunt began her career in the 1970s as a child actress. Her early roles included an appearance as Murray Slaughter's daughter on The Mary Tyler Moore Show, and a regular role in the television series The Swiss Family Robinson. She appeared as a marijuana-smoking classmate on an episode of The Facts of Life. She also appeared as a young woman who, while on PCP, jumps out of a second-story window in a 1982 after school special called Desperate Lives. In the mid-1980s, she had a recurring role on St. Elsewhere as Clancy Williams, girlfriend of Dr. Jack "Boomer" Morrison.

In the 1990s, after the lead female role in the short-lived My Life and Times, Hunt became well-known to television audiences in Mad About You, winning Emmy Awards for her performance in 1996, 1997, 1998, and 1999. Over 25 million people tuned in to see her performance in an episode titled, "The Birth". By the end of the show in 1999, Hunt was the (then) highest-paid TV actress in history, earning $1 million per episode.

Hunt has also had a successful film career, with roles in movies such as Cast Away and the 1996 blockbuster Twister. After winning an Academy Award for Best Actress in 1998 for her performance in As Good as It Gets, she took time off from movie work to play Viola in Shakespeare's Twelfth Night at the Lincoln Center in New York City.

In 2000, Hunt returned to the screen in four films: Dr. T & the Women with Richard Gere, Pay It Forward with Kevin Spacey & Haley Joel Osment, What Women Want with Mel Gibson, and Cast Away with Tom Hanks. In 2003, she returned to Broadway in Yasmina Reza's Life x 3.

In 2006, Hunt appeared in a small role in the film Bobby. Her directorial debut came with the film Then She Found Me, a film in which she also starred.