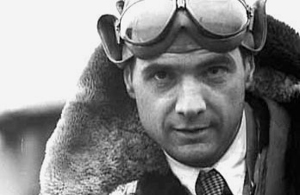 Howard Arvin Hughes, Jr. (December 24, 1905 – April 5, 1976) was, in his time, an aviator, engineer, industrialist, film producer and director, a playboy, an eccentric, and one of the wealthiest people in the world. He is famous for setting multiple, world air-speed records, building the Hughes H-1 Racer and H-4 Hercules airplanes, producing the movies Hell's Angels and The Outlaw, owning and expanding TWA, and for his debilitating eccentric behavior in later life.

Early years
Hughes was born in Humble, Texas, on December 24, 1905. Hughes claimed his birthday was Christmas Eve. Although some biographers debate his exact birth date, (according to NNDB.com, it was most likely "the more mundane date of September 24." His parents were Allene Stone Gano Hughes (a descendant of Catherine of Valois, Dowager Queen of England, by second husband Owen Tudor) and Howard R. Hughes, Sr., who patented the tri-cone roller bit, which allowed rotary drilling for oil in previously inaccessible places. Howard R. Hughes, Sr. founded Hughes Tool Company in 1909 to commercialize this invention.

Hughes grew up under the strong influence of his mother, who was obsessed with protecting her son from all germs and diseases. From his father, Hughes inherited an interest in all things mechanical. At age 12, Hughes was supposedly photographed in the local newspaper as being the first boy in Houston to have a 'motorized' bicycle, which he had built himself.

Hughes' parents died within two years of each other, while he was still in his teens. Allene Hughes died at the age of 39, in March 1922, due to complications from an ectopic pregnancy. Less than two years later in January 1924, Howard Hughes, Sr. died of a heart attack. Their deaths apparently inspired 19-year-old Hughes to include the creation of a medical research laboratory in his 1925 will. It is also believed that the research laboratory was conceived as a tax shelter.

Because Howard Sr.'s will had not been updated since Allene's death, young Hughes inherited 75 percent of his father's multi-million dollar fortune, which included the increasing amounts of cash flow generated from oil drilling royalties. Hughes dropped out of Rice University shortly after his father's death. In June 1925, at age 19, Hughes married Ella Rice, and shortly thereafter they left Houston and moved to Hollywood where Hughes hoped to make a name for himself making movies.

Howard Hughes' gravestone
Hughes Family Gravesite at Glenwood CemeteryHughes died on April 5, 1976, while on an airplane owned by Robert Graf, en route from his penthouse in Acapulco, Mexico to The Methodist Hospital in Houston. It has also been argued that he died before leaving Mexico. His reclusive activities and drug use had made him practically unrecognizable; his hair, beard, fingernails, and toenails had grown grossly long, his once-strapping 6'4" frame now weighed barely 90 lbs, and the FBI had to resort to fingerprints to identify the body.

A subsequent autopsy noted kidney failure as the cause of death. Hughes was in extremely poor physical condition at the time of his death; X-rays revealed broken-off hypodermic needles still embedded in his arms and severe malnutrition. The first doctor to examine him diagnosed the cause of Hughes' death as neglect. While his kidneys were damaged, his other internal organs were deemed perfectly healthy.

Hughes is buried in the Glenwood Cemetery in Houston.