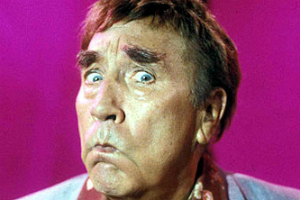 His first stage appearance was at age 13 but his early hopes of becoming a serious actor were dashed when he failed an audition for RADA. He began to entertain during World War II service in the British Army. It was at this time that he adapted his surname to Howerd "to be different".

Despite suffering from stage fright, he continued to work after the war, beginning his professional career in the summer of 1946 in a touring show called For the Fun of It.

His act was soon heard on radio, when he made his debut, in early December 1946, on the BBC's Variety Bandbox programme with a number of other ex-servicemen. His profile rose in the immediate postwar period (aided with material written by Eric Sykes, Galton and Simpson and Johnny Speight). In 1954, he made his screen debut opposite Petula Clark in The Runaway Bus, which had been written for his specific comic talent. The film was so low-budget that it could not afford scenery; instead a fog-generator was used so that little was visible behind the action. The film, however, was an immediate hit, even though Howerd never established a major film presence therafter.

Howerd was a regular feature in the 1950s version of the comic Film Fun but when he began experimenting with different formats and contexts, including stage farces, Shakespearean comedy roles, and television sitcoms, he began to fall out of fashion. After suffering a nervous breakdown at the start of the 1960s, he began to recover his old popularity, initially with a season at Peter Cook's satirical Establishment Club in Soho in London. He was boosted further by success on That Was The Week That Was (TW3) in 1963 and on stage with A Funny Thing Happened on the Way to the Forum (1963–1965), which led into regular television work. In 1966 and 1967, he co-hosted a 90-minute Christmas show called The Frankie and Bruce Christmas Show with Bruce Forsyth, featuring many top acts of the day.

With Petula Clark in the 1954 British comedy The Runaway Bus

He was famous for his seemingly off-the-cuff remarks to the audience, especially in the show Up Pompeii!, which was a direct follow-up from Forum. His television work was characterised by direct addresses to camera and by his littering monologues with verbal tics such as "Oooh, no missus" and "Titter ye not". A later sale of his scripts, however, showed that the seemingly off-the-cuff remarks had all been meticulously planned. Barry Cryer said of his technique: "What he could do with a script was amazing, like all the great performers. He transformed something you'd just written - what you hoped was in a Frankie Howerd idiom - but when you heard him do it, my God, it was something else; - it was gossiping over the garden wall, the apparent waffle - he was like a tightrope walker, you thought he's going to fall off in a minute, you thought , 'Come on, Frank' , we're waiting for a laugh, and then, suddenly, Bang.

He knew exactly what he was doing." Another feature of his humour was to feign innocence about his obvious and risqué double entendres while mockingly censuring the audience for finding them funny.

Howerd appeared as Francis Biggar, one of the lead characters in 1967's Carry On Doctor, one of the more memorable films of the Carry On... canon.

The success of the film version of Up Pompeii in 1971 saw British exhibitors vote him the ninth most popular star at the British box office that year.

In 1971 Howerd recorded, with June Whitfield, a comedy version of the song "Je t'aime", made famous by Jane Birkin and Serge Gainsbourg, in which she featured as "Mavis" alongside Howerd's "Frank", and a third unexplained sleeping partner named "Arthur". The song was included in the 2004 CD re-issue of Oh! What a Carry On!.

In 1976, Howerd appeared in The Frankie Howerd Show on CBC Television. It received good ratings but was not renewed.

In 1978, Howerd appeared in the big-budget Hollywood musical Sgt. Pepper's Lonely Hearts Club Band playing Mean Mr Mustard, acting alongside musical and film talent such as Peter Frampton, the Bee Gees, George Burns, Alice Cooper, Aerosmith and Steve Martin. He was cast by producer Robert Stigwood as he was on Stigwood's record label at the time. The film was a critical and commercial flop. Since Howerd was not well known to American audiences, this may have been his biggest exposure in the U.S..

After six years without a regular television show in the United Kingdom (though he had hosted a one-off UK version of The Gong Show for Channel 4, which was critically panned and was not commissioned for a full series), Howerd returned to TV screens in 1987 in the Channel 4 show Superfrank!, scripted by Miles Tredinnick and Vince Powell. In the last years of his career, Howerd developed a following with student audiences and performed a one-man show at universities and in small theatrical venues. He was also a regular and popular guest on the late night BBC Radio 1 programme Into the Night, hosted by Nicky Campbell.

Howerd often worked with Sunny Rogers who was his accompanying pianist from 1960 onwards. She appeared in his TV and live theatre shows including his last major West End appearance—his one-man show—at the Garrick Theatre in 1990. In 1982, Howerd appeared in the televised versions of Trial by Jury (as the Learned Judge) and H.M.S. Pinafore (as Sir Joseph Porter, KCB).

Throughout his career, Howerd hid his potentially career-destroying homosexuality (acts between consenting males being illegal in England and Wales until 1967) from both his audience and his mother, Edith.

In 1958, he met wine waiter Dennis Heymer at the Dorchester Hotel while dining with Sir John Mills; Howerd was 40 and Heymer was 28. Heymer became his lover as well as manager, and stayed with Howerd for more than thirty years, until Howerd's death, with Heymer helping to revive Howerd's flagging career in the 1960s. However, the two had to remain discreet as Howerd feared being blackmailed if anyone beyond his immediate circle found out. The relationship was explored in 2008 in a drama for BBC Four, Rather You Than Me, starring David Walliams and Rafe Spall.

Backstage, Howerd was notoriously bold in his advances, and was known for his promiscuity. One of Howerd's former boyfriends was comic actor Lee Young who created the TV sitcom Whoops Baghdad (1973) for him. Howerd's uncomfortable relationship with his sexuality – he once said to Cilla Black, "I wish to God I wasn't gay" – as well as his depressive mental state, led him to seek resolution through a series of different methods. Heymer would often drop Howerd off on Friday at his psychiatrist, who would ply him with LSD over the weekend.

In his early career Howerd suffered from a stutter, which caused him some distress. Close friend Cilla Black said in 2008: "That devastated him" adding, "Often he'd be physically ill with stage fright.".

Howerd and Heymer lived for the last twenty or so years of his life in Wavering Down, a house in the village of Cross, Somerset under the Mendip Hills. After Howerd's death, Heymer curated Howerd's collection of memorabilia until his own death in 2009. The two were buried together in a replica Egyptian sarchophagus.

Having contracted a virus during a Christmas trip up the River Amazon in 1991, Howerd suffered respiratory problems at the beginning of April 1992 and was rushed to London's Harley Street Clinic, but was released at Easter to enjoy his last few days at home. He collapsed and died of heart failure two weeks afterwards, on the morning of 19 April 1992. He was 75 years old. Two hours before he died, he was speaking on the telephone to his TV producer about new ideas for his next show.

Howerd died one day before fellow comedian Benny Hill. News of the two deaths broke almost simultaneously and some newspapers ran an obituary of Howerd in which Hill was quoted as regretting Howerd's passing, saying "We were great, great friends". The quote was released by Hill's agent, who was not aware that his client had died.

A BBC TV biography about Frankie Howerd — Rather You Than Me — was broadcast by BBC Four on 9 April 2008, and repeated on 10 February 2013. The script was written by Peter Harness, after extensive interviews with Howerd's partner, Dennis Heymer. The comedian David Walliams was cast as Howerd.

Howerd's home, Wavering Down, is a tourist attraction and, in the summer, hosts concerts and opens regularly as a museum of Howerd's collection of memorabilia and personal effects such as his false teeth and ill-fitting toupee to raise funds for charities.Howerd's grave is at St. Gregory's Church in Weare, Somerset.