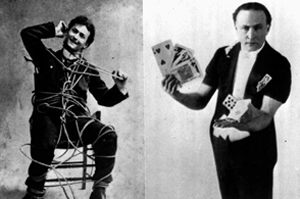 Harry Houdini (March 24, 1874 – October 31, 1926), whose real name was Ehrich Weiss (which was changed from Erich Weisz when he emigrated to America), was a Hungarian-American magician, escapologist (widely regarded as one of the greatest ever), stunt performer, as well as an investigator of spiritualists, film producer, actor, and an amateur aviator.

Birth
Harry Houdini was born into a Jewish family in Budapest, Hungary. His given name is found spelled differently in different sources and also his birth date is uncertain. However, years after his death a copy of his birth certificate was found and published in The Houdini Birth Research Committee's Report (1972). According to that original source, he was born on March 24, 1874 as Erich Weisz. Houdini himself spelled his name Ehrich Weiss, as can be seen from this letter to his mother. As to his birth date, from 1900 onwards Houdini claimed in interviews to have been born in Appleton, Wisconsin on April 6, 1874.

He immigrated with his family to the United States on July 3, 1878 at the age of four on the SS Fresia with his mother (who was pregnant), and his four brothers. Houdini's name was listed as Ehrich Weiss. Friends called him "Ehrie" or "Harry".

At first, they lived in Appleton, where his father served as rabbi of the Zion Reform Jewish Congregation. In 1880, the family was living on Appleton Street. On June 6, 1882, Rabbi Weiss became an American citizen. After losing his tenure, he moved to New York City with Ehrich in 1887. They lived in a boarding house on East 79th Street. Rabbi Weiss later was joined by the rest of the family once he found more permanent housing. As a child Ehrich took several jobs, one of which was as a locksmith's apprentice, and then being a champion cross country runner. He made his public debut as a 10-year-old trapeze artist, calling himself, "Ehrich, the prince of the air."

Magic
In 1894, Weiss became a professional magician, and began calling himself "Harry Houdini" because he was influenced by French magician Jean Eugène Robert-Houdin and his friend Jack Hayman told him that in French adding an "i" to Houdin would mean "like Houdin" the great magician. In later life Houdini would claim that the first part of his new name, Harry, was a homage to Harry Kellar, whom Houdini admired a great deal. However, it's more likely Harry derived naturally from his nickname "Ehrie." Initially, his magic career resulted in little success, though he met fellow performer Wilhelmina Beatrice (Bess) Rahner in 1893, and married her three weeks later. For the rest of his performing career, Bess would work as his stage assistant.

Houdini initially focused on traditional card acts. At one point he billed himself as the "King of Cards." One of his most notable non-escape stage illusions was performed in London's hippodrome: he vanished a full-grown elephant (with its trainer) from a stage, beneath which was a swimming pool.

He soon began experimenting with escape acts. Harry Houdini's "big break" came in 1899, when he met the showman Martin Beck. Impressed by Houdini's handcuffs act, Beck advised him to concentrate on escape acts and booked him on the Orpheum vaudeville circuit. Within months, he was performing at the top vaudeville houses in the country. In 1900, Houdini traveled to Europe to perform.

Houdini was a sensation in Europe where he became widely known as "The Handcuff King." He toured England, Scotland, the Netherlands, Germany, France, and Russia. In each city Houdini would challenge local police to restrain him with shackles and lock him in their jails. In many of these challenge escapes, Houdini would first be stripped nude and searched. In Moscow, Houdini escaped from a Siberian prison transport van. Publicity stated that, had he been unable to free himself, he would have had to travel to Siberia where the only key was kept. In Cologne, he sued a police officer, Werner Graff, who claimed he made his escapes via bribery. Houdini won the case when he opened the judge's safe (he would later say the judge had forgotten to lock it). With his newfound wealth and success, Houdini purchased a dress said to have been made for Queen Victoria. He then arranged a grand reception where he presented his mother in the dress to all their relatives. Houdini said it was the happiest day of his life. In 1904, Houdini returned to the U.S. and purchased a house for $25,000, a brownstone at 278 W. 113th Street in Harlem, New York. The house still stands today.

From 1907 and throughout the 1910s, Houdini performed with great success in the United States. He would free himself from jails, handcuffs, chains, ropes, and straitjackets, often while hanging from a rope in plain sight of street audiences. Because of imitators and a dwindling audience, on January 25, 1908, Houdini put his "handcuff act" behind him and began escaping from a locked, water-filled milk can. The possibility of failure and death thrilled his audiences. Rather than promote the idea that he was assisted by spirits, as did the Davenport Brothers and others, Houdini advertised to the public that he made his escapes by dematerializing. In 1913, he introduced perhaps his most famous act, the Chinese Water Torture Cell, in which he was suspended upside-down in a locked glass-and-steel cabinet full to overflowing with water. The act required that Houdini hold his breath for more than three minutes.

He explained some of his tricks in books written for the magic brotherhood throughout his career. In Handcuff Secrets (1909) he revealed how many locks and handcuffs could be opened with properly applied force, others with shoestrings. Other times, he carried concealed lockpicks or keys, being able to regurgitate small keys at will. When tied down in ropes or straitjackets, he gained wiggle room by enlarging his shoulders and chest, and by moving his arms slightly away from his body, and then dislocating his shoulders. His straitjacket escape was originally performed behind curtains, with him popping out free at the end. However, Houdini's brother who was also an escape artist billing himself as Theodore Hardeen, after being accused of having someone sneak in and let him out and being challenged to escape without the curtain, discovered that audiences were more impressed and entertained when the curtains were eliminated, so that they could watch him struggle to get out. They both performed straitjacket escapes dangling upside-down from the roof of a building for publicity on more than one occasion. It is said that Hardeen once handed out bills for his show while Houdini was doing his suspended straightjacket escape and Houdini became upset because people thought it was Hardeen up there escaping, not Houdini. Many people imitate some of his tricks to this day.

In 1910, Houdini toured Australia. He brought with him his Viosin biplane and had the distinction of achieving the first controlled powered flight over Australia, doing so on March 21, at Diggers Rest, Victoria, just north of Melbourne. . Colin Defries preceded him, but he crashed the plane on landing. .

For the majority of his career, Houdini performed his act as a headliner in vaudeville. For many years he was the highest paid performer in American vaudeville. In the last years of his life (1925/26), Houdini launched his own full evening show which he billed as "3 Shows in One: Magic, Escapes, and Fraud Mediums Exposed."