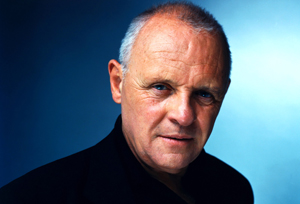 Sir Philip Anthony Hopkins CBE (born 31 December 1937) is an Academy Award, Golden Globe and Emmy Award-winning film, stage and television actor. He was born and raised in Wales, but became an American citizen in 2000.

Early life
Hopkins was born in Margam, Port Talbot in Wales to Muriel Anne (née Yeats) and Richard Arthur Hopkins, a baker. His mother is a distant relative of the Irish poet William Butler Yeats. His schooldays were unproductive. A loner with dyslexia, he found that he would rather immerse himself in art, such as painting and drawing or playing the piano, than attend to his studies. In 1949, to instill some discipline, his parents insisted that he attend Jones' West Monmouth Boys' School in Pontypool. He remained there for five terms, of which Hopkins does not have fond memories. He was then educated at Cowbridge Grammar School.

Hopkins was influenced and encouraged to become an actor by compatriot Richard Burton, whom he met briefly at the age of 15. To that end, he enrolled at the College of Music and Drama in Cardiff, from which he graduated in 1957. After a two-year spell in the Army, he moved to London where he trained at RADA, at the suggestion of Roy Marsden.

Career
In 1965, after several years spent performing and honing his craft in repertory, he was spotted by Laurence Olivier, who invited him to join the National Theatre. Hopkins was given the opportunity to be Olivier's understudy, and got his chance to shine when the actor was struck down with appendicitis during a production of August Strindberg's The Dance of Death. Olivier later noted in his memoir, Confessions of an Actor:

"A new young actor in the company of exceptional promise named Anthony Hopkins was understudying me and walked away with the part of Edgar like a cat with a mouse between its teeth."

Despite his success at the National, Hopkins tired of repeating the same roles nightly and yearned to be in movies. In 1968, he got his break in The Lion in Winter playing Richard I, along with future James Bond star Timothy Dalton, who played Philip II of France.

Although Hopkins continued in theatre (most notably in the Broadway production of Peter Shaffer's Equus, directed by John Dexter) he gradually moved away from it to become more established as a television and film actor. He has since gone on to enjoy a long career, winning many plaudits for his performances. He was made a Commander of the British Empire (CBE) in 1987, and a Knight Bachelor in 1993. In 1996 Hopkins was awarded an honorary fellowship from the University of Wales, Lampeter.

Hopkins has stated that his role as Burt Munro, whom he portrayed in his 2005 film The World's Fastest Indian, was his favourite role ever in his career. Hopkins also asserted that Munro was the easiest role that he had ever played because both men have a similar outlook on life.

In 2006, Hopkins was the recipient of the Golden Globe Cecil B. DeMille Award for lifetime achievement.