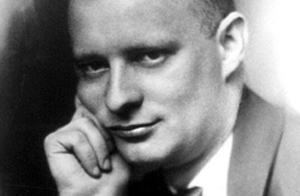 Biography
Born in Hanau, Germany, Hindemith was taught the violin as a child. He entered the Hochsche Konservatorium in Frankfurt am Main where he studied conducting, composition and violin under Arnold Mendelssohn and Bernhard Sekles, supporting himself by playing in dance bands and musical-comedy outfits.

He acted as concertmaster of the Frankfurter Museumsorchester from 1915 to 1923 and played in the Rebner string quartet from 1914 in which he played second violin, and later the viola. In 1921 he founded the Amar Quartet, playing viola, and extensively toured Europe.

In 1922, some of his pieces were heard in the International Society for Contemporary Music festival at Salzburg, which first brought him to the attention of an international audience. The following year, he began to work as an organizer of the Donaueschingen Festival, where he programmed works by several avant garde composers, including Anton Webern and Arnold Schoenberg. From 1927 he taught composition at the Berliner Hochschule für Musik in Berlin.

In the 1930s he made a visit to Cairo and several visits to Ankara where (at the invitation of Atatürk) he led the task of reorganizing Turkish music education and the early efforts for the establishment of Turkish State Opera and Ballet. Towards the end of the 1930s, he made several tours in America as a viola and viola d'amore soloist.

Hindemith's relationship to the Nazis is a complicated one: some condemned his music as "degenerate" (largely on the basis of his early, sexually charged operas such as Sancta Susanna), and on December 6 1934, during a speech at the Berlin Sports Palace, Germany’s Minister of Propaganda, Joseph Goebbels publicly denounced Hindemith as an “atonal noisemaker.”

Others, though, thought that he might provide Germany with an example of a modern German composer, who by this time was writing music based in tonality, and with frequent references to folk music; the conductor Wilhelm Furtwängler's defence of Hindemith, published in 1934, takes precisely this line.

The controversy around his work continued throughout the thirties, with the composer falling in and out of favour with the Nazi hierarchy; he finally emigrated to Switzerland in 1938 (partly as his wife was Jewish), and in the meantime had sworn an oath to Hitler, had accepted a commission to write music for a Luftwaffe event (although it never materialised), conducted for official Nazi concerts, and accepted a position on the Reich Music Chamber. This part of Hindemith's life has until recently been downplayed by historians of the composer (such as Skelton or Kemp), who have mostly tried to assert his anti-Nazi beliefs.

In 1935, Hindemith was commissioned by the Turkish government to reorganize that country's musical education, and, more specifically, was given the task of preparing material for the “Universal and Turkish Polyphonic Music Education Programme” for all music-related institutions in Turkey, a feat which he accomplished to universal acclaim. This development seems to have been supported by the Nazi regime: it may have got him conveniently out of the way, yet at the same time he propagated a German view of musical history and education. (Hindemith himself said he believed he was being an ambassador for German culture.) Hindemith did not stay in Turkey as long as many other émigrés. Nevertheless, he greatly influenced the developments of Turkish musical life; the Ankara State Conservatory owes much to his efforts. In fact, Hindemith was regarded to be a “real master” by young Turkish musicians and he was appreciated and greatly respected.

In 1940 Hindemith emigrated to the United States. At the same time that he was codifying his musical language, his teaching and compositions began to be affected by his theories, according to critics like Ernest Ansermet (1961, note to p. 42 added on an errata slip). Once in the States he taught primarily at Yale University where he had such notable pupils as Lukas Foss, Norman Dello Joio, Mel Powell, Harold Shapero, Hans Otte, Ruth Schonthal, and Oscar-winning film director George Roy Hill. During this time he also gave the Charles Eliot Norton Lectures at Harvard, from which the book A Composer's World was extracted (Hindemith 1952). He became an American citizen in 1946, but returned to Europe in 1953, living in Zürich and teaching at the university there. Towards the end of his life he began to conduct more, and made numerous recordings, mostly of his own music. He was awarded the Balzan Prize in 1962.

Hindemith died in Frankfurt am Main from acute pancreatitis.

Hindemith's music
Hindemith is among the most significant German composers of his time. His early works are in a late romantic idiom, and he later produced expressionist works, rather in the style of early Arnold Schoenberg, before developing a leaner, contrapuntally complex style in the 1920s. It has been described as neoclassical, but is very different from the works by Igor Stravinsky labeled with that term, owing more to the contrapuntal language of Bach than the Classical clarity of Mozart.

This new style can be heard in the series of works he wrote called Kammermusik (Chamber Music) from 1922 to 1927. Each of these pieces is written for a different small instrumental ensemble, many of them very unusual. Kammermusik No. 6, for example, is a concerto for the viola d'amore, an instrument which had not been in wide use since the baroque period, but which Hindemith himself played. He continued to write for unusual groups throughout his life, producing a sonata for double bass in 1949, for example.

Around the 1930s, Hindemith began to write less for chamber groups, and more for large orchestral forces. In 1933-35, Hindemith wrote his opera Mathis der Maler, based on the life of the painter Matthias Grünewald. It is respected in musical circles, but like most twentieth-century operas it is rarely staged, though a well-known production by the New York City Opera in 1995 was an exception (Holland 1995). It combines the neo-classicism of earlier works with folk song. Hindemith turned some of the music from this opera into a purely instrumental symphony (also called Mathis der Maler), which is one of his most frequently performed works.

Hindemith, like Kurt Weill and Ernst Krenek, wrote Gebrauchsmusik (Utility Music), music intended to have a social or political purpose and often intended to be played by amateurs. The concept was inspired by Bertolt Brecht. An example of this is his Trauermusik (Funeral Music), written in 1936. Hindemith was preparing a concert for the BBC when he heard news of the death of George V. He quickly wrote this piece for solo viola and string orchestra to mark the event, and the premiere was given on the same day. Hindemith later disowned the term Gebrauchsmusik, saying it was misleading.

Hindemith's most popular work, both on record and in the concert hall, is probably the Symphonic Metamorphoses of Themes by Carl Maria von Weber, written in 1943. It takes melodies from various works by Weber, mainly piano duets, but also one from the overture to his incidental music for Turandot (Op. 37/J. 75), and transforms and adapts them so that each movement of the piece is based on one theme.

In 1951, Hindemith completed his Symphony in B-flat. Scored for concert band, it was written for the U.S. Army Band "Pershing's Own". Hindemith premiered it with that band on April 5th of that year . Its second performance took place under the baton of Hugh McMillan, conducting the Boulder Symphonic Band at the University of Colorado. The piece is representative of his late works, exhibiting strong contrapuntal lines throughout, and is a cornerstone of the band repertoire.

Hindemith's musical system
Most of Hindemith's music uses a unique system that is tonal but non-diatonic; it is centered around a tonic, and modulates from one tonal center to another like most tonal music, but uses all 12 notes freely rather than relying on a scale picked as a subset of these notes. Hindemith even rewrote some of his music after developing this system. One of the key features of his system is that he ranks all musical intervals of the 12-tone equally tempered scale from the most consonant to the most dissonant. He classifies chords in six categories, on the basis of how dissonant they are, whether or not they contain a tritone, and whether or not they clearly suggest a root or tonal center. Hindemith's philosophy also encompasses melody--Hindemith strives for melodies that do not clearly outline major or minor triads.

In the late 1930s, Hindemith wrote a theoretical book The Craft of Musical Composition (Hindemith 1937–70), which lays out this system in great detail. It laid out Hindemith's compositional technique he had been using throughout the 1930s and would continue to use for the rest of his life. Hindemith also advocated for his system as a means of understanding and analyzing the harmonic structure of other music, claiming that it has a broader reach than the traditional roman numeral approach to chords (an approach that is strongly tied to the diatonic scales). In the same book, Hindemith uses his system to analyze his own music alongside music of J.S. Bach, and even that of Arnold Schoenberg.

His piano work of the early 1940s, Ludus Tonalis is seen by many as a further example or exploration of this system. It contains twelve fugues, in the manner of Johann Sebastian Bach, each connected by an interlude during which the music moves from the key of the last fugue to the key of the next one. The order of the keys follows Hindemith's ranking of musical intervals around the tonal center of C.

One traditional aspect of classical music that Hindemith retains is the idea of dissonance resolving to consonance. Much of Hindemith's music begins in consonant territory, progresses rather smoothly into dissonance, and resolves at the end in full, consonant chords. This is especially apparent in his "Concert Music for Strings and Brass."