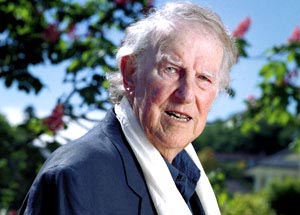 Sir Edmund Percival Hillary, KG, ONZ, KBE (born 20 July 1919) is a New Zealand mountaineer and explorer. On 29 May 1953 he and Sherpa mountaineer Tenzing Norgay became the first climbers known to have reached the summit of Mount Everest. They were part of the ninth British expedition to Everest, led by John Hunt.

Youth
Edmund Percival Hillary was born to Percival Augustus Hillary and Gertrude Clark in Tuakau (south of Auckland), on July 20, 1919. His grandparents were early settlers in northern Wairoa in the mid 19th century, after emigrating from Yorkshire. Hillary was educated at Auckland Grammar School. His daily bus journey to and from school was over two hours each way, during which he regularly used time to read. As he grew up he was smaller than his peers, and very shy, so he took refuge in his books and daydreams of a life filled with adventure. At 16, his interest in climbing was sparked during a school trip to Mount Ruapehu. Though gangly and uncoordinated, he found that he was physically strong and had greater endurance than many of his tramping companions. In 1939, he completed his first major climb, reaching the summit of Mount Olivier in the Southern Alps.

With his brother Rex, Hillary became a beekeeper, allowing him to pursue climbing in the austral winter and beekeeping off-season.

School of Radiant Living
Hillary's family was involved with Herbert Sutcliffe in the School of Radiant Living, helping to found a school in Auckland, and Hillary's mother was secretary. In 1939, at 19, Hillary trained as an accredited teacher of Radiant Living and was briefly Sutcliffe's assistant. From 1938-1943 he was closely associated with the school in Auckland. In his book View from the Summit (Doubleday, London, 1999) Hillary wrote: "I gained quite a lot from Radiant Living - I learned to speak confidently from the platform and even started thinking more freely on important topics. But finally my enthusiasm faded, as it always seemed to do. I developed the conviction that I was trying to escape from ordinary life, so I reluctantly withdrew from the organisation."

World War II
In 1943 Hillary joined the RNZAF as a navigator, and served on Catalina flying boats. In 1945 he was sent to Fiji and the Solomon Islands where he was badly burned in a boating accident after which he was repatriated to New Zealand.

Expeditions
He was part of a British reconnaissance expedition to Everest in 1951 led by Eric Shipton before joining the successful British attempt of 1953.

1953 Everest Expedition
In that era, the route to Everest was closed by Chinese-controlled Tibet and Nepal allowed only one expedition per year. A Swiss expedition (in which Tenzing took part) had attempted to reach the summit in 1952, but was turned back by weather 800 feet (260 m) from the summit. During a 1952 trip in the Alps, Hillary discovered he and his friend George Lowe had been invited for the approved British 1953 attempt and immediately accepted.

Shipton was named as leader, but was replaced by Hunt. Hillary considered pulling out, but both Hunt and Shipton talked him into remaining. Hillary was intending to climb with Lowe, but Hunt named two teams for the assault: Tom Bourdillon and Charles Evans, and Hillary and Tenzing. Hillary therefore made a concerted effort to forge a working friendship with Tenzing.

The Hunt expedition, like many such expeditions, was a team effort. Lowe supervised the preparation of the Lhotse Face, a huge and steep ice face, for climbing. Hillary forged a route through the treacherous Khumbu Icefall.

The expedition set up base camp in March 1953. Working slowly, the group set up its final camp at the South Col, 7,900 metres (25,900 ft). On May 26, Bourdillon and Evans attempted the climb, but turned back when Evans' oxygen system failed. The pair had reached the South Summit, coming within 100 metres (300 ft) of the summit. Hunt then directed Hillary and Tenzing to go for the summit.

Snow and wind held up the pair at the South Col for two days. They set out on May 28 with a support trio of Lowe, Alfred Gregory, and Ang Nyima. The two pitched a tent at 8,500 metres (27,900 ft) on May 28, while their support group returned down the mountain. On the following morning, Hillary discovered his boots had frozen solid outside the tent. He spent two hours warming them before he and Tenzing attempted the final ascent, wearing 30-pound packs. The crux move of the last part of the ascent was the 40-foot (12 m) rock face later named the "Hillary Step." Hillary saw a means to wedge his way up a crack in the face between the rock wall and ice, and Tenzing followed. From there, the following effort was relatively simple. They reached the summit at 11:30 am. As Hillary put it, "A few more whacks of the ice axe in the firm snow, and we stood on top."

Tenzing Norgay on the summit of Mt. Everest. Photograph taken by Edmund Hillary, May 29, 1953They spent only about 15 minutes at the summit. They unsuccessfully looked for evidence of the earlier Mallory expedition. Hillary took Tenzing's photo, Tenzing left chocolates in the snow as an offering, and Hillary left a cross that he had been given.

The two had to take care on the descent, discovering that drifting snow had covered their tracks to complicate the task. The first person they met was Lowe, who had climbed up to meet them with hot soup.

"Well George, we finally knocked the bastard off."

As it happened, news of the successful expedition reached civilization on the day of the coronation of Queen Elizabeth II. The group was surprised by the international acclaim that they received upon arriving in Kathmandu.

After Everest
Hillary climbed 10 other peaks in the Himalayas on further visits in 1956, 1960-61 and 1963-65. He also reached the South Pole, as part of the Commonwealth Trans-Antarctic Expedition for which he led the New Zealand section, on 4 January 1958. He also led a jetboat expedition from the mouth of the Ganges River to its source in 1977. In 1985, Hillary accompanied Neil Armstrong in a small, twin-engine ski plane over the Arctic Ocean and landed at the North Pole. He thus became the first man to stand at both poles as well as the summit of Everest. That same year, Hillary was appointed New Zealand High Commissioner (Ambassador) to India, Nepal, and Bangladesh, and spent four and a half years based in New Delhi.

In 1979, he had been scheduled to act as a commentator on the ill-fated Air New Zealand Flight 901, an Antarctic sightseeing flight, but had to pull out due to work commitments elsewhere. He was replaced by his close friend Peter Mulgrew, who perished as the flight crashed on Mount Erebus.

In January 2007 Hillary travelled to Antarctica to commemorate the fiftieth anniversary of the founding of Scott Base. While there, Hillary called for the British government to contribute to the upkeep of Scott's and Shackleton's huts.

On Sunday 22 April 2007, whilst on a trip to Kathmandu, Sir Edmund Hillary apparently suffered a fall. There was no comment on the nature of his illness and he did not immediately seek treatment. He was hospitalised after returning to his native New Zealand.

To mark the occasion of the 50th anniversary of the first successful ascent of Everest, the Nepalese Government conferred honorary citizenship upon Sir Edmund at a special Golden Jubilee celebration in the capital, Kathmandu. He is the first foreign national to receive such an honour from the Nepalese.

Family life
Hillary married Louise Mary Rose on September 3, 1953, soon after the ascent of Everest. A shy man, Hillary relied on his future mother-in-law to propose on his behalf. They had three children: Peter (1954), Sarah (1955), and Belinda (1959).

In 1975, while en route to join Hillary in the village of Phaphlu, where he was helping build a hospital, Louise and Belinda were tragically killed in a plane crash in Nepal, near Kathmandu airport shortly after take-off.

His son Peter Hillary has become a climber in his own right, successfully climbing Everest for the first time in 1990. In April 2003, Peter and Jamling Tenzing Norgay (son of Tenzing) climbed Everest as part of a 50th anniversary celebration.

Hillary also has six grandchildren including Amelia Hillary who is also involved in Hillary's work in the Himalayas.

Philanthropy
He has devoted all of his life to helping the Sherpa people of Nepal through the Himalayan trust which he founded and to which he has given much of his time and energy. Through his efforts he has succeeded in building many schools and hospitals in this remote region of the Himalayas. He has stated that he regards this as his most important achievement. He is also the Honorary President of the American Himalayan Foundation, a United States non-profit body that also helps improve the ecology and living conditions in the Himalayas. During the mid-1980s, he was New Zealand's High Commissioner to India (the equivalent of an Ambassador between Commonwealth countries), where he was in frequent demand as a guest of honour.

Wikinews has related news:
Sir Edmund Hillary was angry with mountaineers who left British climber to dieHillary has recently spoken of his disdain for the attitudes displayed by many modern mountaineers. In particular he publicly criticised New Zealander Mark Inglis and 40 other climbers who, in various groups, left British climber David Sharp to die in May 2006. He said:

"I think the whole attitude towards climbing Mount Everest has become rather horrifying. The people just want to get to the top, it was wrong if there was a man suffering altitude problems and was huddled under a rock, just to lift your hat, say good morning and pass on by"

He also told the New Zealand Herald that he was horrified by the callous attitude of today’s climbers:

To take part in the celebration of the 50th anniversary of Scott Base (New Zealand) in Antarctica, Sir Edmund Hillary, along with a delegation including the Prime Minister, flew to the station on January 18, 2007.
Hillary took part in the 1975 general election, as a member of the "Citizens for Rowling" campaign. His involvement in this campaign is seen as precluding his nomination as Governor-General, with the position instead being offered to Keith Holyoake in 1977.
The oldest house in Macleans College is named after him.
Hillary House is a Primary Wing House at St Paul's School, Darjeeling in India, named in his honor.