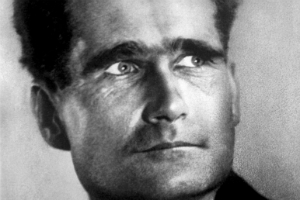 German politician (born in Egypt), the Deputy Leader of the Nazi party and No.3 in power after Hermann Goering. He joined the army in 1914 and became a shock troop leader, then a pilot. In January 1920 he joined Hitler's Party where he rose to the position of SS General.

Inexplicably, Hess took off at 5:45 PM from Augsburg, Germany, to fly to Scotland on May 10, 1941, where he bailed out of the plane and took it on his own to attempt negotiations with England on behalf of Germany. He believed that he was obeying supernatural powers and had a mission to end the war. Hitler denied his authority, calling him insane.

Hess was imprisoned and tried in November 1941, given a life sentence. After 21 months in a Nuremberg prison, he spent 41 years at Spandau. He wrote prodigiously about the Nazis and the war, convinced that he would play a leading role in the "Fourth Reich."

He initially goose-stepped down the corridors of Spandeau, snapping the Nazi salute. After an initial period of rages and bouts of persecution mania, Hess settle into a routine of numbing regularity. His days started with an hour of calisthenics, breakfast, a walk in the prison garden, lunch, an afternoon of reading and television (he was banned from news programs).

For a half hour each month, he was allowed a visit from his wife and son; no touching was permitted. For the last 21 years, he was the sole inmate of Spandeau. After four suicide attempts, he strangled himself with an electric cord on 8/17/1987, 4:10 PM, age 93.