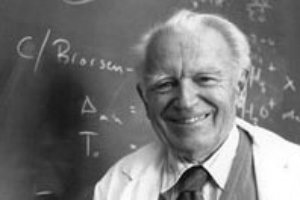 German physicist, known for his work in determining the structure of molecules, in particular free radicals. He won the Nobel Prize in 1971 for chemistry. One of Herzberg’s most important works is the three-volume "Molecular Spectra and Molecular Structure," 1939-1966.

His father died when he was 10, leaving his mother to support him and his brother. She immigrated to the United States where she worked as a housekeeper and sent small amounts of money back to her sons. As a child Herzberg was interested in astronomy and applied to study at Hamburg Observatory. Because of the family’s money problems, however, he was discouraged from pursuing his passion.

During high school, he immersed himself in mathematics, physics and chemistry and caught the attention of the physics teacher, Herr Hillers, who took him under his wing. In 1924, aided by a private scholarship, Herzberg began his studies at the Technical University.