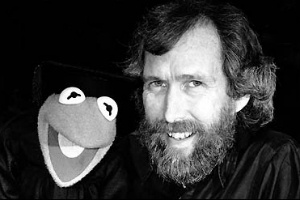 American puppeteer, producer, director, writer and performing genius. Winner of seven Emmys, Henson was inducted into the Academy of TV Arts and Sciences Hall of Fame 1987.

He was the second of two sons born to Paul, an employee of the Department of Agriculture, and Elizabeth, a homemaker. His brother Paul, a few years older, was killed in a car crash when Jim was 22. When he was in fifth grade the family returned to Maryland, and he was raised a Christian Scientist. Encouraged to use his artistic and creative talents by his maternal grandmother, while in high school he began creating memorable characters he called Muppets, half marionettes, half puppets and he began his first local five minute TV show in 1954.

A freshman at University of Maryland in 1955, he was given his own twice daily five-minute TV show, "Sam and Friends," on the local NBC affiliate, winning a local Emmy in 1958. His first performing partner was Jane Nebel whom he later married. Henson graduated in 1960 with a B.A. and trained with noted puppeteer Bill Baird. He appeared on many national shows as a guest and began recruiting a team of creative people that stayed with him throughout his career. Jim moved to New York in 1963 making weekly appearances on "The Today Show" and gaining many commercial ad clients.

With a strong interest in film making, Henson began experimenting and he received an Oscar nomination for his first live action short subject, "Time Piece" in 1965. Henson's big break occurred in 1969 when he went to work for the PBS Children's TV Workshop which created the popular public television show for children, "Sesame Street." The Muppets that Henson introduced were a smash hit with TV audiences, Kermit the Frog, Bert and Ernie, a large yellow bird named "Big Bird," the Cookie Monster, Grover, and Oscar the Grouch. The show became a hit abroad, beaming into the homes of 100 countries in 14 languages. His Muppets started making history teaching kids the alphabet and how to count. They received awards from Canada, most European countries and the U.S. including seven Emmys, the first in 1977, a Luminary Award from Advertising Club of Washington, DC in 1977, a first Grammy in 1978, the Saturn Award in 1979 and over 100 other vocational awards.

From TV to live action and animated films, Henson's creativity touched a wide range of media and people of all ages with his adorable cast and crew. Henson continued to actively work with the television show supplying the voice and movements for Kermit. In the '70s, the marketing and licensing of the Muppet characters made Henson a wealthy and successful puppeteer.

In 1976, British impresario Sir Lew Grade financed Henson's "The Muppet Show." The show introduced new Muppet characters such as Fozzie Bear and the celebrated Miss Piggy. The syndicated series won an audience of 235 million and became the most popular syndicated show in TV history.

He received a doctor of fine arts degree from University Maryland in 1977 and from Fordham University in 1982. Henson pulled the plug on the show in 1981 to concentrate his creativity in the film industry.

Many celebrities enjoyed making cameo appearances in the successful films, "The Muppet Movie," 1979, "The Muppets Take Manhattan," 1984 and "Muppet Treasure Island" in 1996 in which over 400 Muppet creatures appear. The visionary puppeteer directed his characters in "The Great Muppet Caper," 1981, "The Dark Crystal," 1982 and "Labyrinth," in 1986. His last projects were "The Storyteller," begun in 1987 and "Jim Henson's Greek Myths."

In August 1989, Henson started negotiations to sign over his characters to the Walt Disney Company except for his Sesame Street characters. He closed the sale in the spring of 1990 for $200 million.

Jim and Jane Nebel were married 5/28/1959. They had five kids, the youngest born in 1971. They legally separated two years before Jim's death, but did not divorce, remaining friends. Jane was with him when he died. Four years previous to his death he wrote a letter to his children with his last wishes.

Henson suffered from adolescent acne and grew a beard to cover the scars. Flying between New York, Los Angeles and Orlando, Florida weekly took a physical toll on Jim. His favorite pastime was the total relaxation of frequent walks in Manhattan's Central Park.

In early 1990, feeling ill with a cold, but not wanting to bother anyone, his condition had evolved into full-blown pneumonia before he entered the emergency room at New York Hospital suffering from a virulent bacterial infection under acute, respiratory distress. Put on a ventilator at 8:00 AM on 5/15/1990 Henson spent less than 21 hours in the hospital.

His heart and kidneys were failing and he was in shock. After two cardiac arrests his heart stopped beating 5/16/1990, 1:21 AM New York. Doctors believed he might have recovered from his illness if he had been admitted earlier to the hospital.