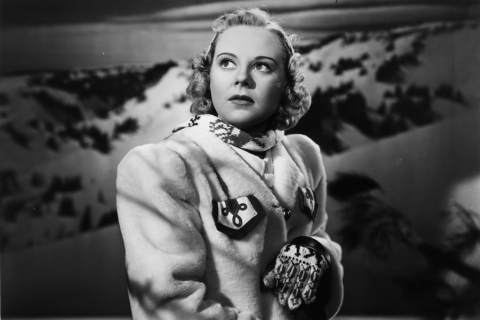 Sonja Henie was born in Kristiania, current Oslo, the only daughter of Wilhelm Henie (1872–1937), a prosperous Norwegian furrier and his wife Selma Lochmann-Nielsen (1888–1961). In addition to the income from the fur business, both of Henie's parents had inherited wealth. Wilhelm Henie had been a one-time World Cycling Champion and the Henie children were encouraged to take up a variety of sports at a young age. Henie initially showed talent at skiing, and then followed her older brother Leif to take up figure skating. As a girl, Henie was also a nationally ranked tennis player and a skilled swimmer and equestrienne. Once Henie began serious training as a figure skater, her formal schooling ended. She was educated by tutors, and her father hired the best experts in the world, including the famous Russian ballerina Tamara Karsavina, to transform his daughter into a sporting celebrity.

Henie won her first major competition, the senior Norwegian championships, at the age of 10. She then placed eighth in a field of eight at the 1924 Winter Olympics, at the age of eleven. During the 1924 program, she skated over to the side of the rink several times to ask her coach for directions. But by the next Olympiad, she needed no such assistance.

Henie won the first of an unprecedented ten consecutive World Figure Skating Championships in 1927 at the age of fourteen. The results of 1927 World Championships, where Henie won in 3–2 decision (or 7 vs. 8 ordinal points) over the defending Olympic and World Champion Herma Szabo of Austria, was controversial, as all three of five judges that gave Henie first-place ordinals were Norwegian (1 + 1 + 1 + 2 + 2 = 7 points) while Szabo received first-place ordinals from an Austrian and a German Judge (1 + 1 + 2 + 2 + 2 = 8 points). Henie went on to win first of her three Olympic gold medals the following year. She defended her Olympic titles in 1932 and in 1936, and her World titles annually until 1936. She also won six consecutive European championships from 1931 to 1936. Henie's unprecedented three Olympic gold medals haven't been matched by any ladies single skater since; neither are her achievements as ten-time consecutive World Champion. While Irina Slutskaya of Russia won her seventh European Championship in 2006 to become the most successful ladies skater in European Championships, Henie retains record of most consecutive titles, sharing it with Katarina Witt of Eastern Germany/Germany (1983–1988).

Towards the end of her career, she began to be strongly challenged by younger skaters including Cecilia Colledge, Megan Taylor and Hedy Stenuf. However, she held off these competitors and went on to win her third Olympic title at the 1936 Winter Olympics, albeit in very controversial circumstances with Cecilia Colledge finishing a very close second. Indeed, after the school figures section at the 1936 Olympic competition, Colledge and Henie were virtually neck and neck with Colledge trailing by just a few points. As Sandra Stevenson recounted in her article in The Independent of the 21st April 2008, "the closeness  infuriated Henie, who, when the result for that section was posted on a wall in the competitors' lounge, swiped the piece of paper and tore it into little pieces. The draw for the free skating  came under suspicion after Henie landed the plum position of skating last, while Colledge had to perform second of the 26 competitors. The early start was seen as a disadvantage, with the audience not yet whipped into a clapping frenzy and the judges known to become freer with their higher marks as the event proceeded. Years later, a fairer, staggered draw was adopted to counteract this situation".

During her competitive career, Henie traveled widely and worked with a variety of foreign coaches. At home in Oslo, she trained at Frogner Stadium, where her coaches included Hjordis Olsen and Oscar Holte. During the latter part of her competitive career she was coached primarily by the American Howard Nicholson in London. In addition to traveling to train and compete, she was much in demand as a performer at figure skating exhibitions in both Europe and North America. Henie became so popular with the public that police had to be called out for crowd control on her appearances in various disparate cities such as Prague and New York City. It was an open secret that, in spite of the strict amateurism requirements of the time, Wilhelm Henie demanded "expense money" for his daughter's skating appearances. Both of Henie's parents had given up their own pursuits in Norway—leaving Leif to run the fur business—in order to accompany Sonja on her travels and act as her managers.

Henie is credited with being the first figure skater to adopt the short skirt costume in figure skating, wear white boots, and make use of dance choreography. Her innovative skating techniques and glamorous demeanor transformed the sport permanently and confirmed its acceptance as a legitimate sport in the Winter Olympics.

After the 1936 World Figure Skating Championships, Henie gave up her amateur status and took up a career as a professional performer in acting and live shows. While still a girl, Henie had decided that she wanted to move to Hollywood and become a movie star when her competitive days were over, without considering that her thick accent might hinder her acting ambitions.

In 1936, following a successful ice show in Los Angeles orchestrated by her father to launch her film career, Hollywood studio chief Darryl Zanuck signed her to a long term contract at Twentieth Century Fox which made her one of the highest-paid actresses of the time. After the success of her first film, One in a Million, Henie's position was assured and she became increasingly demanding in her business dealings with Zanuck. Henie also insisted on having total control of the skating numbers in her films such as Second Fiddle (1939).

In addition to her film career at Fox, Henie formed a business arrangement with Arthur Wirtz, who produced her touring ice shows under the name of "Hollywood Ice Revue". Wirtz also acted as Henie's financial advisor. At the time, figure skating and ice shows were not yet an established form of entertainment in the United States. Henie's popularity as a film actress attracted many new fans and instituted skating shows as a popular new entertainment. Throughout the 1940s, Henie and Wirtz produced lavish musical ice skating extravaganzas at Rockefeller Center's Center Theatre attracting millions of ticket buyers.

At the height of her fame, her shows and touring activities brought Henie as much as $2 million per year. She also had numerous lucrative endorsement contracts, and deals to market skates, clothing, jewelry, dolls, and other merchandise branded with her name. These activities made her one of the wealthiest women in the world in her time.

Henie broke off her arrangement with Wirtz in 1950 and for the next three seasons produced her own tours under the name "Sonja Henie Ice Revue". It was an ill-advised decision to set herself up in competition with Wirtz, whose shows now featured the new Olympic champion Barbara Ann Scott. Since Wirtz controlled the best arenas and dates, Henie was left playing smaller venues and markets already saturated by other touring ice shows such as Ice Capades. The collapse of a section of bleachers during a show in Baltimore, Maryland in 1952 compounded the tour's legal and financial woes.

In 1953 Henie formed a new partnership with Morris Chalfen to appear in his European Holiday On Ice tour. This was a great success. She produced her own show at New York's Roxy Theatre in January 1956. However, a subsequent South American tour in 1956 was a disaster. Henie was drinking heavily at that time and could no longer keep up with the demands of touring, and this marked her retirement from skating.

In 1938, she published her autobiography Mitt livs eventyr which has translated and released as Wings on My Feet in 1940, which was republished in a revised edition in 1954. At the time of her death, Henie was planning a comeback for a television special that would have aired in January 1970.

Henie's connections with Adolf Hitler and other high-ranking Nazi officials made her the subject of controversy before, during, and after World War II. During her amateur skating career, she performed often in Germany and was a favorite of German audiences and of Hitler personally. As a wealthy celebrity, she moved in the same social circles as royalty and heads of state and made Hitler's acquaintance as a matter of course.

Controversy appeared first when Henie greeted Hitler with a Nazi salute during an exhibition in Berlin some time prior to the 1936 Winter Olympics; she was strongly denounced by the Norwegian press. She did not repeat the salute at the Olympics in Garmisch-Partenkirchen, but after the Games she accepted an invitation to lunch with Hitler at his resort home in nearby Berchtesgaden, where Hitler presented Henie with an autographed photo with a lengthy inscription. After beginning her film career, Henie kept up her Nazi connections, for example personally arranging with Joseph Goebbels for the release of her first film, One in a Million, in Germany.

During the occupation of Norway by Nazi Germany, German troops saw Hitler's autographed photo prominently displayed at the piano in the Henie family home in Landøya, Asker. As a result, none of Henie's properties in Norway were confiscated or damaged by the Germans. Henie became a naturalized citizen of the United States in 1941. Like many Hollywood stars, she supported the U.S. war effort through USO and similar activities, but she was careful to avoid supporting the Norwegian resistance movement, or making public statements against the Nazis. For this, she was condemned by many Norwegians and Norwegian-Americans. After the war, Henie was mindful that many of her countrymen considered her to be a quisling. However, she made a triumphant return to Norway with the Holiday on Ice tour in 1953 and 1955.

Henie was married three times, to Dan Topping, Winthrop Gardiner Jr., and the wealthy Norwegian shipping magnate and art patron, Niels Onstad. After her retirement in 1956, Henie and Onstad settled in Oslo and accumulated a large collection of modern art that formed the basis for the Henie-Onstad Art Centre at Høvikodden in Bærum near Oslo.

In addition to her marriages, Henie had a variety of love interests, including her skating partners Jack Dunn and Stewart Reburn, celebrated boxing legend Joe Louis, a much-publicized affair with Tyrone Power, and a later romance with actor Van Johnson. According to the biography Queen of Ice, Queen of Shadows, written by her brother Leif with Raymond Strait after her death, Henie was obsessed with money and sex, had a vile temper when crossed, and used her family and others shamelessly to advance her own ends.

Henie was diagnosed with leukemia in the mid-1960s. She died of the disease at age 57 in 1969 during a flight from Paris to Oslo. Considered by many as one of the greatest figure skaters in history, she is buried with Onstad in Oslo on the hilltop overlooking the Henie-Onstad Art Centre.