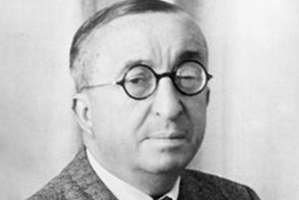 German aircraft designer, manufacturer, Wehrwirtschaftsführer in the Third Reich, and member of the Nazi party. His company Heinkel Flugzeugwerke produced the Heinkel He 178, the world's first turbojet aircraft and jet plane, and the Heinkel He 176, the first rocket aircraft. He was awarded the German National Prize for Art and Science in 1938.

As a young man became an apprentice machinist at a foundry. Heinkel studied at the Technical Academy in Stuttgart, where he initially became interested in aviation through a fascination with Zeppelins, and in 1909 attended an international airshow in Frankfurt am Main. He determined flight was the future of transportation, and the following year, he built his first aircraft, working from a set of plans by Henri Farman. Heinkel crashed the plane in 1911 and suffered severe injuries. Soon afterwards, he gained employment at Luft-Verkehrs Gesellschaft (LVG), who were building Farman aircraft. From there, he went to Albatros, where Heinkel designed the Albatros B-II, a reconnaissance aircraft used during the early stages of the First World War. His planes were used by the Austro-Hungarian army and German navy during the war. After leaving the Albatros, Heinkel designed several land- and seaplanes for the Hansa-Brandenburg company starting in 1914. In 1921, Heinkel was appointed head designer of the recently re-established Caspar-Werke, but soon left after a dispute over ownership of a design. In 1922 he established the Heinkel-Flugzeugwerke company at Warnemünde. Due to the restrictions placed on German aircraft manufacturing by the Treaty of Versailles, Heinkel looked overseas for contracts, with some seaplane designs being licence-built in Sweden and working on catapult-launched seaplanes for the Imperial Japanese Navy. He installed a similar catapult on the ocean liner Bremen for launching mail planes. Between 1921-1924, the Japanese government placed several orders with Heinkel's company, and helped him skirt the Versailles Treaty, which banned the construction of military aircraft in Germany, by informing the company of facility inspections by allied commissions in advance. Japan was part of the inspection commission. Heinkel hid his aircraft in dunes behind his plant and were never discovered during inspections. Heinkel noted in his memoirs that his company's relationship with Japan in the 1920s led to decades of cooperation.

After Adolf Hitler came to power, designs by Heinkel's firm formed a vital part of the Luftwaffe's growing strength in the years leading up to the Second World War. This included the Heinkel He 59, the Heinkel He 115 and the Heinkel He 111. He was designated a Wehrwirtschaftführer (~ defence industry leader) by the German government for his commitment to rearmament. Heinkel was passionate about high-speed flight, and was keen on exploring alternative forms of aircraft propulsion. He donated aircraft to Wernher von Braun who was investigating rocket propulsion for aircraft, as well as sponsoring the research of Hans von Ohain into turbojet engines, leading to the flight of the Heinkel He 178, the first aircraft to fly solely under turbojet power by Erich Warsitz on August 27, 1939. Heinkel had been a critic of Hitler's regime concerning being forced to fire Jewish designers and staff in 1933, however, he was a member of the Nazi party, awarded the German National Prize for Art and Science in 1938, one of the rarest honors of the German government, and he used forced Jewish labor starting in 1941, in which his company was considered a "model for slave labor." In 1942 the government "nationalised" the Heinkel works. In practice, this meant that Heinkel was detained until he sold his controlling interest in his factories to Hermann Göring. Heinkel moved to Vienna and started a new design bureau there, working on the Heinkel He 274 design until the war ended.

With Germany forbidden from manufacturing aircraft by the Allies, Heinkel used his company's facilities to build private transportation. In 1953 Heinkel began production of the Tourist scooter, followed by the Perle moped in 1954. In 1956 he introduced the Heinkel Kabine bubble car. Bubble car and moped production ceased shortly after the restriction on aircraft manufacture was lifted, but scooter production continued until 1965. In 1959, Heinkel's company was sued by Edmund Bartl for being enriched by slave labor during World War II, however, the German Supreme Court dismissed his claims for filing too late and ordered Bartl to pay court costs and attorney's fees.