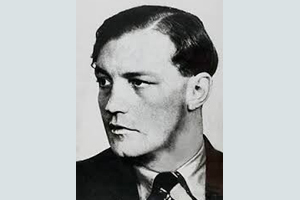 British murderer and sadist who is noted for the gruesome killings of two women, crimes, "too horrible to describe." He was noted for being an exceptionally handsome and charming man and for some time, cut a swath worthy of a movie hero.

In February 1936, Heath began service in the RAF with a commission. He was court-martialled in August 1937 for being AWOL for five months. He escaped arrest by taking an officer's car. In November 1937, he posed as an officer, "Lord Dudley" to gain fraudulent credit at a Nottingham hotel. Captured, he was arraigned on ten offenses, including entering and theft in July 1938.

With the outbreak of WW II, Heath was released from Hollesby Bay Colony, September 1939, and he enlisted in the Royal Army Service Corp the following month. He was commissioned and posted to the middle East in March 1940. Upon a dispute with a Brigadier, he was arrested in July 1941; found to have five counts of bad checks, he went AWOL. He was detained and put on a ship to England. In Durban, South Africa he jumped ship and went to Johannesburg, passing as Capt. Selway, a Highlander.

In December 1941, Heath enlisted under his assumed identity and was commissioned in the South Africa Air Force. Apparently in a comfortable niche, Heath married in 1942 and had a son. Serving as an RAF pilot of a Mitchell bomber, he was shot down on the Dutch-German border in May 1944. His identity exposed, he was court-martialled on six charges and dismissed in August 1945 in South Africa. His wife divorced him for desertion in October 1945 and he returned to England in February 1946.

On the morning of 6/21/1946, Heath killed Margery Gardner, 32, in Notting Hill, London. Her body was found in a hotel room registered in Heath's name, her wrists and ankles bound and her nipples bitten nearly off. She had been flogged with a whip on her face, chest, back and stomach and a poker had been inserted into her vagina. The cause of death was suffocation. The police put out a bulletin but did not release Heath's picture. As a result, a second woman died.

Heath went on holiday to Bournemouth and registered at the Tallard Royal hotel as Group Captain Rupert Brookes. He was thought to be an officer and a gentleman, playing host to drinks around. On July 3rd he was introduced to 21-year-old Doreen Marshall and persuaded her to have dinner with him. During the dinner, she was apparently upset and ordered a cab but they reconciled and he cancelled it. They left the hotel at 00:15 AM, 7/04/1946.

When Marshall was missing, Heath was investigated and found to have a pearl from her necklace in his jacket and scratches on his face. Her body was found on July 8th, naked, horribly flogged and mutilated and with her throat cut.

The trial opened on 9/24 at Central Criminal Court. The defense did not put Heath on the stand but entered a plea of insanity. Within two days he was found sane and guilty. To the end he remained cool, well-dressed and in control, the picture of the debonair playboy. Heath was hanged on 10/26/1946.