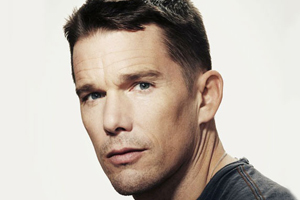 Hawke was born in Austin, Texas, to James Steven Rosencrantz and Leslie Carole Green, who were students at the University of Texas at the time of his birth, and separated five years later. Hawke's great-grandfather was the brother of Cornelius Williams, who was the father of well-known playwright Tennessee Williams.

When he was 10 he moved with his mother from Atlanta to New York where attended the Packer Collegiate Institute in Brooklyn Heights and then moved to West Windsor , New Jersey, where he attended West Windsor-Plainsboro High School South and then transferred to and graduated from the Hun School of Princeton in 1988. He took acting classes at the McCarter Theatre.

His first paid role was at the age of 12 in McCarter's production of George Bernard Shaw's Saint Joan.

Career
At the age of fourteen he made his feature film debut in Joe Dante's Explorers (1985). Hawke studied acting at the British Theatre Association in England and at Carnegie Mellon University in Pittsburgh. He has twice enrolled in New York University's English program and is one of the founding fathers and artistic director of Malaparte, a former New York City theatre company. Malaparte productions included A Joke!; Wild Dogs; Good Evening; Sons and Fathers; It Changes Every Year; Veins and Thumbtacks; Hesh; and The Great Unwashed.

Hawke as Vincent Anton Freeman/Jerome Morrow in GattacaIn 1988, Hawke was cast in a role in director Peter Weir's Dead Poets Society; the film's success was considered Hawke's breakthrough. He left school and appeared in A Midnight Clear, Alive, Reality Bites, Before Sunrise, Gattaca, The Newton Boys, Great Expectations and many other movies. In 2001, he was nominated for an Academy Award for Best Supporting Actor in Training Day.

Hawke directed Chelsea Walls and has written two novels, The Hottest State (in 1996) and Ash Wednesday (in 2002), which received a nomination from The Guardian for worst sex scene of the year. In 2005, he received his first screenwriting Oscar nomination for co-writing the 2004 film, Before Sunset (a sequel to Before Sunrise).

On March 26, 2006 Hawke's personal business office in New York City was destroyed by a fast-moving fire. He was in the middle of directing and starring in a movie version of his first novel, The Hottest State. The fire broke out in a newly renovated office on the second floor of the office building and the blaze quickly spread to the fifth floor. It destroyed Hawke's fourth-floor office and his post-production studio. Master tapes and negatives from Hawke's film were being stored off-site and were reportedly not destroyed by the fire.

In the summer of 2006, he shot the Sidney Lumet film Before the Devil Knows You're Dead with Marisa Tomei, Albert Finney, and Philip Seymour Hoffman.

From October 2006 through May 2007, he was in The Coast of Utopia by Tom Stoppard at Lincoln Center in New York, playing Mikhail Bakunin. For this performance, he was nominated for a Tony Award for Best Featured Actor in a Play.

Hawke lives in Chelsea, a neighborhood in the borough of Manhattan in New York City, and owns a small peninsula in Tracadie, Nova Scotia, he has recently completed a screenplay with Tracadie neighbor, writer Charles Gaines, author of 'Pumping Iron' and inventor of the game Paintball.

He is a Democrat.

His mother, Leslie Hawke, has been honored for her ongoing humanitarian work in Romania, where she first went as a member of the Peace Corps in 2000. She founded and runs an educational charity for Roma (Gypsy) children in that country (www.ovid.ro).

It has also been rumored that Hawke owns a diner out in Arkansas which he named "The Hawke".