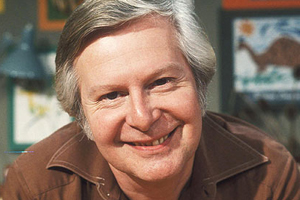 Norman Antony "Tony" Hart (15 October 1925 – 18 January 2009) was an English artist and children's television presenter. He started off as an officer in a Gurkha regiment but became famous for being a children's presenter and artist on television shows such as Vision On, Playbox, Take Hart and Hartbeat, often accompanied by Morph. He also created the Blue Peter ship logo.

Hart was interested in drawing from an early age. He attended All Saints, Margaret Street Resident Choir School and then Clayesmore School in Dorset, where art was his best subject.

He left school in 1944 and wanted to join the Royal Air Force, but as he would have been unable to fly owing to slightly deficient eyesight, he instead signed up with the British Indian Army and served as an officer in the 1st Gurkha Rifles. After the war, he was told that low-ranked British officers would be replaced by Indian officers when India became independent and he decided to leave the army.

After being demobilised, Hart decided to become a professional artist and studied art at Maidstone College of Art, which later became Kent Institute of Art & Design (and is now the Maidstone campus of the University for the Creative Arts). He graduated in 1950 and, after working as a display artist in a London store, became a freelance artist. The outbreak of the Korean War saw him being re-commissioned in the Territorial Army, attached to the Royal Artillery, from 23 November 1948 to 1 July 1950.

This section may contain original research. Please improve it by verifying the claims made and adding inline citations. Statements consisting only of original research may be removed. (September 2010)

Hart's break into broadcast television work came in 1952, after his brother persuaded him to attend a party where he met a BBC children's TV producer. After an interview, in which Hart drew a fish on a napkin while the producer was looking for paper, Hart became resident artist on the Saturday Special programme. Subsequent TV shows included Playbox (1954–59), Tich and Quackers, Vision On (1964–76) Take Hart (1977–83), Hartbeat (1984–93), Artbox Bunch (1995–96) and Smart Hart (1999–2000). From the 1970s, he often appeared alongside the animated Plasticine stop-motion character Morph, created by Peter Lord of Aardman Animations.

Hart was a regular face on the BBC children's programme Blue Peter in the 1950s and presented a number of programmes in 1959. Richard Marson's book Blue Peter: Inside the Archives lists Hart as a presenter in November 1959 but he is not officially listed as a host. As well as demonstrating small-scale projects (the type that viewers might be able to do), Hart also created large-scale artworks on the TV studio floor, and even used beaches and other open spaces as 'canvases' (to be viewed from a camera-crane).

A regular feature of Hart's TV shows was 'The Gallery', which displayed artworks (paintings, drawings and collages) sent in by young viewers. One of the pieces of easy-listening vibraphone music accompanying this feature—"Left Bank Two", composed by Wayne Hill and performed by the Lance Gambit Trio—has passed into British TV theme lore. This was first introduced in the show Vision On. Hart also created the original design for the Blue Peter badge, also used as the programme's logo. He originally asked for his fee to be paid as a royalty of 1d (one pre-decimalisation penny) for each badge made, but was offered a flat fee of £100(equivalent to around £1,600 at 2006 rates). The badges are famous throughout the UK and have been coveted by three successive generations of Blue Peter viewers.

Hart received two BAFTA awards. His first came in 1978 for a series of comic shorts about a plasticine character named 'Junfan' (a spin off from Morph, a similar character who was the star of animated shorts on Hart's TV shows), and he was given a Lifetime Achievement Award in 1998. He retired from regular TV work in 2001.

Hart met his wife, Jean Skingle, while working in television; they married in 1953. They were married for 50 years until she died in 2003. They had a daughter, Carolyn, and two grandchildren.

On 28 December 2006, it was announced during the reunion programme It Started with Swap Shop that Hart was in poor health, though this was not elaborated upon until an interview with The Times published on 30 September 2008, revealing that two strokes had robbed him of the use of his hands and left him unable to draw. He described this as "the greatest cross I have to bear". Hart died peacefully on 18 January 2009 at the age of 83.

Hart's funeral took place in the village of Shamley Green, where the artist had lived for more than 40 years.