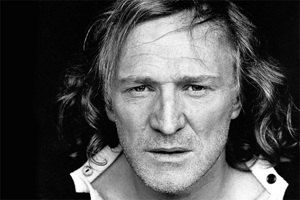 Richard St John Harris (1 October 1930 – 25 October 2002) was an Irish actor, singer, theatrical producer, film director and writer. He appeared on stage and in many films, and is perhaps best known for his role as King Arthur in the 1967 film Camelot and the subsequent 1982 Broadway revival of the show. He is also known for playing Albus Dumbledore in the first two films in the Harry Potter series, his final works. He played an aristocrat and prisoner in A Man Called Horse (1970), Emperor Marcus Aurelius in Gladiator (2000), Saint John in Apocalypse Revelation (2002), a gunfighter in Clint Eastwood's Western film Unforgiven (1992), and Dom Frollo in a TV movie The Hunchback (1997) based on the Victor Hugo novel Notre-Dame de Paris. Harris had a top ten hit in the UK and the US with his 1968 recording of Jimmy Webb's song "MacArthur Park". At the height of his stardom in the 1960s and 1970s he was almost as well known for his hellraiser lifestyle and heavy drinking as he was for his considerable abilities as an actor.

Harris was schooled by the Jesuits at Crescent College. A talented rugby player, he was on several Munster Junior and Senior Cup teams for Crescent, and played for Garryowen. Harris' athletic career was cut short when he caught tuberculosis in his teens. He remained an ardent fan of the Munster Rugby and Young Munster teams then until his death, attending many of its matches, and there are numerous stories of japes at rugby matches with the actors and fellow rugby fans Peter O'Toole and Richard Burton.

After recovering from tuberculosis, Harris moved to England, wanting to become a director. He could not find any suitable training courses, and he enrolled in the London Academy of Music and Dramatic Art (LAMDA) to learn acting. He had failed an audition at the Royal Academy of Dramatic Art (RADA), and had been rejected by the Central School of Speech and Drama because they felt he was too old at 24. While still a student, Harris rented the tiny "off-West End" Irving Theatre, and there directed his own production of Clifford Odets's play Winter Journey (The Country Girl). This show was a critical success, but it was a financial failure, and Harris lost all his savings in this venture.

As a result, Harris ended up temporarily homeless, sleeping in a coal cellar for six weeks. Accounts of Harris' contemporaries from his hometown of Limerick, however, indicate that Harris may have exaggerated these stories somewhat and that he actually stayed with a few aunts, sleeping on their living room sofas. After completing his studies at the Academy, Harris joined Joan Littlewood's Theatre Workshop. He began getting roles in West End theatre productions, starting with The Quare Fellow in 1956, a transfer from the Theatre Workshop. Harris spent nearly a decade in obscurity, learning his profession on stages throughout the UK.

Harris made his film debut in 1958 in the film Alive and Kicking, and played the lead role in The Ginger Man in the West End in 1959. He hated filming The Wreck of the Mary Deare so much that he refused to return to Hollywood for several years, turning down the role of Commodus in The Fall of the Roman Empire (1964). He had a memorable bit part in the movie The Guns of Navarone (1961) as a Royal Australian Air Force pilot who reports that blowing up the "bloody guns" of the island of Navarone is impossible by an air raid.

For his role in the film Mutiny on the Bounty (1962), despite being virtually unknown to film audiences, Harris reportedly insisted on third billing, behind Trevor Howard and Marlon Brando. He did not get along at all with Brando during filming.

Harris' first starring role was in the movie This Sporting Life (1963), as a bitter young coal miner, Frank Machin, who becomes an acclaimed rugby league football player. For his role, Harris won Best Actor in 1963 at the Cannes Film Festival and an Academy Award nomination. Harris followed this with a leading role in the Italian film, Michelangelo Antonioni's Il Deserto Rosso (Red Desert, 1964), and he also won notice for his role in Sam Peckinpah's Major Dundee (1965), as an Irish immigrant who became a Confederate cavalryman during the Civil War.

In 1966, Harris played Cain in John Huston's film The Bible: In the Beginning. Harris next performed the role of King Arthur in the film adaptation of the musical play Camelot (1967). He continued to appear on stage in this role for many years, including a successful Broadway run in 1981–82. In A Man Called Horse (1970) Harris starred as an 1825 English aristocrat who is captured by Indians. He lives with them and begins to understand/accept their lifestyles. That year British exhibitors voted him the 9th most popular star at the UK box office.

Harris recorded several albums of music, one of which, (A Tramp Shining), included the seven-minute hit song "MacArthur Park" (Harris insisted on singing the lyric as "MacArthur's Park"). This song had been written by Jimmy Webb, and it reached number 2 on the American Billboard Hot 100 chart. It also topped several music sales charts in Europe during the summer of 1968. "MacArthur Park" sold over one million copies, and was awarded a gold disc. A second album, with music mostly composed by Webb, The Yard Went on Forever, was released in 1969.

Other movie performances followed, among them a role as a reluctant police informant in the coal-mining tale The Molly Maguires (1970), also starring Sean Connery. Harris starred in Cromwell (1970), a film based on the life of Oliver Cromwell who led the Parliamentary forces during the English Civil War and, as Lord Protector, ruled Great Britain and Ireland in the 1650s. Harris starred in the Man in the Wilderness (1971), Juggernaut (1974), a British suspense movie about the hijacking of an ocean liner, The Cassandra Crossing (1976), along with the actresses Sophia Loren and Ava Gardner, and in a B-movie, Orca (1977). His highest-grossing film of this era was the action ensemble movie The Wild Geese (1978), co-starring his friend Richard Burton.

In 1973, Harris published a book of poetry, I, In The Membership Of My Days, which was later reissued in part in an audio LP format, augmented by self-penned songs such as "I Don't Know." By the late 1980s roles in Mack the Knife and the TV movie version of Maigret, opposite Barbara Shelley, indicated declining popularity which Harris told his biographer, Michael Feeney Callan, he was "utterly reconciled to".

In the spring of 1989 director Jim Sheridan cast Harris in a small role in The Field, written by the esteemed western Irish playwright John B. Keane. The lead role of "Bull" McCabe was to be played by former Abbey Theatre actor Ray McAnally. When McAnally died suddenly in May 1989, Harris was offered the McCabe role. The Field was released in 1990 and earned Harris his second Academy Award nomination for Best Actor. He lost to Jeremy Irons for Reversal of Fortune. In 1992, Harris had a supporting role in the film Patriot Games, as an Irish-American radical.

A lifelong supporter of Jesuit education principles, Harris established a friendship with Scranton University Pennsylvania President J. A. Panuska and raised funds for a scholarship for Irish students established in honour of his brother and manager, Dermot, who had died the previous year of a heart attack. He chaired acting workshops and cast the university's production of Julius Caesar in November, 1987.

Over several years in the late eighties, Harris worked with Irish author Michael Feeney Callan on his biography, which was published by Sidgwick & Jackson, London, in 1990.

Harris appeared in two films which won the Academy Award for Best Picture. First, as the gunfighter "English Bob" in the Western Unforgiven (1992); second, as the Roman Emperor Marcus Aurelius in Ridley Scott's Gladiator (2000). He also played a lead role alongside James Earl Jones in the Darrell Roodt film adaptation of Cry, the Beloved Country (1995). In 1999, Harris starred in the film To Walk with Lions. After Gladiator, Harris played the supporting role of Albus Dumbledore in the first two of the Harry Potter films, and as Abbé Faria in Kevin Reynolds' film adaptation of The Count of Monte Cristo (2002). The film Kaena: The Prophecy (2003) was dedicated to him posthumously as he had voiced the character Opaz before his death.

Concerning his role as Dumbledore, Harris had stated that he did not intend to take the part at first, since he knew that his own health was in decline, but he relented and accepted it because his 11-year-old granddaughter threatened never to speak to him again if he did not take it. In an interview with the Toronto Star in 2001, Harris expressed his concern that his association with the Harry Potter movies would outshine the rest of his career. He explained by saying: "Because, you see, I don't just want to be remembered for being in those bloody films, and I'm afraid that's what's going to happen to me."

In 1957, he married Elizabeth Rees-Williams, daughter of David Rees-Williams, 1st Baron Ogmore. Their three children are actor Jared Harris, who played Lane Pryce on AMC's Mad Men and who was once married to Emilia Fox, actor Jamie Harris, and director Damian Harris, once married to Annabel Brooks and now partner of Peta Wilson. Harris and Rees-Williams divorced in 1969, after which Elizabeth married Rex Harrison. His maternal niece is actress Annabelle Wallis.

Harris's second marriage was to the American actress Ann Turkel. This marriage also ended in a divorce.

Harris was a member of the Roman Catholic Knights of Malta, and was also dubbed a knight by the Queen of Denmark in 1985.

Harris paid £75,000 for William Burges' Tower House in Holland Park in 1968, after discovering that the American entertainer Liberace had bought the house but not yet put down a deposit. Harris employed the original decorators, Campbell Smith & Company Ltd. to carry out extensive restoration work on the interior.

Harris was a vocal supporter of the IRA from the early 1970s. In December 1983 remarks he made on the Harrods bombing caused great controversy, after which he disavowed his support for the IRA.

Harris was a longtime alcoholic until he became a teetotaler in 1981, although he did resume drinking Guinness a decade later. He gave up drugs after almost dying from a cocaine overdose in 1978.

Harris was diagnosed with Hodgkin's disease in August 2002, reportedly after being hospitalised with pneumonia. He died at University College Hospital, London on 25 October 2002, aged 72, two and a half weeks before the American premiere of Harry Potter and the Chamber of Secrets. Harris was a lifelong friend of actor Peter O'Toole, and his family reportedly hoped that O'Toole would replace Harris as Dumbledore in Harry Potter and the Prisoner of Azkaban. There were, however, worries of insuring O'Toole for the six remaining films in the series, and he was ultimately replaced as Dumbledore by the Irish-born actor Sir Michael Gambon.

Harris's remains were cremated, and his ashes were scattered in The Bahamas, where he had owned a home.

On 30 September 2006, Manuel Di Lucia, of Kilkee, County Clare, a long-time friend, organised a bronze life-size statue of Richard Harris, at the age of eighteen, playing squash rackets. The sculptor was Seamus Connolly and the sculpture (unveiled by Russell Crowe) stands in Kilkee, Ireland. Harris was an accomplished squash racket player, winning the Tivoli Cup in Kilkee four years in a row from 1948 to 1951, a record surpassed by nobody to this day.

Another life-size statue of Richard Harris, as King Arthur from his film, Camelot, has been erected in Bedford Row, in the centre of his home town of Limerick. The sculptor of this statue was the Irish sculptor Jim Connolly, a graduate of the Limerick School of Art and Design.

At the 2009 BAFTAs, Mickey Rourke dedicated his Best Actor award to Harris, calling him a "good friend, and great actor."