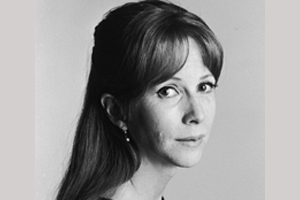 American actress whose stage prominence began in 1945 and earned her five Tony awards out of a record ten nominations, with periodic ventures into movies and television. Broadway credits are upward of 30, but TV brought her the widest fame with her seven-year stint as LiliMae Clements in "Knots Landing," which ran from 1981 to 1987.

The product of a happy childhood, she grew up in Grosse Point, Michigan, the daughter of a well-off investment banker and his wife, a trained nurse. She studied for a year at Yale before making her Broadway bow in 1945 in "It's a Gift," which lasted a few weeks. She hit it big in 1950 with the role of Frankie Addams, the motherless 12-year-old tomboy in Carson McCullers' "The Member of the Wedding." She then came back two seasons later as Sally Bowles in "I Am a Camera," the non-musical forerunner to "Cabaret." Her movie debut reprised the Addams role in "The Member of the Wedding" in 1952, and merited an Oscar nomination. Over the decades, her stage roles have ranged from Joan of Arc in "The Lark," 1955 to Mary Todd Lincoln in "The Last of Mrs. Lincoln." In 1977, she played Emily Dickinson in "The Belle of Amherst," which she said was her favorite role.

Harris' film work, though less frequent, has included "East of Eden," 1955, "Requiem for a Heavyweight," 1962, "The Haunting," 1963 and "Reflections in a Golden Eye," 1967. In recent years, she has done a number of real-life stage portraits that include Charlotte Bronte in "Bronte," Isak Dinesen in "Lucifer's Child" and James Joyce's wife, Nora, in "Is He Still Dead?"

Her planned 1999 projects were "Winter," "Amber Patches," "Scent of the Roses" and a new production called "Staying on Alone," in which she portrays Alice B. Toklas, yet another real-life character for her gallery. She is scheduled to reprise "The Belle of Amherst" in the fall of the year 2000.

The 75-year-old Tony-winning actress was hospitalized in stable condition 5/29/2001 after she was found semiconscious in her Chicago apartment.